Manchester City knew that allowing Stevan Jovetić to leave the Etihad Stadium this summer would have been a mistake, and the Montenegrin striker is certainly repaying the faith the club have put in him.

The 24-year-old led City to a convincing victory over Liverpool on Monday night, scoring two goals in the 3-1 win. But the sparkling performance came as no surprise to manager Manuel Pellegrini, who watched the former Fiorentina man emerge from an impressive pre-season with five goals.

“A lot of teams wanted him this year but we have always said no, he must stay here with our squad," Pellegrini said. 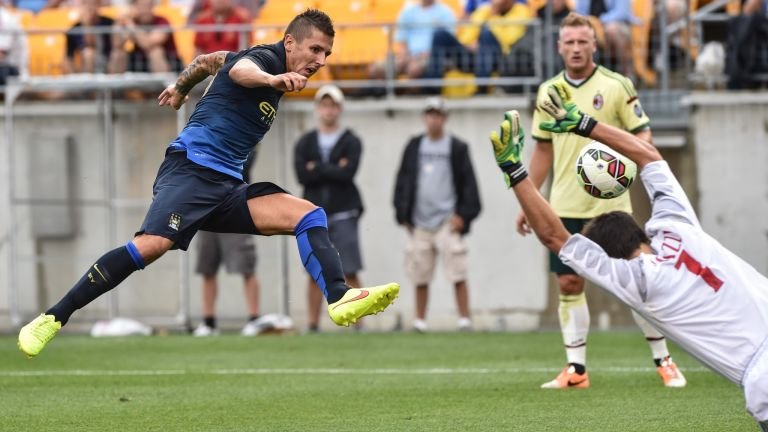 Inter Milan, Juventus and Roma all registered their interest in the player who endured a calamitous first season with the Premier League champions. Jovetić was limited to just 11 league appearances last term due to persistent injury and was immediately linked with a move away from the club in January - but the £22m man now believes those problems are behind him.

“I did so many tests, with so many doctors, and discovered what the problem was,” he told the Manchester Evening News. “Now I feel good, and am working well.

“The doctor told me it wasn’t a big problem, just that my hamstrings were not so strong, so now I am working on it in the gym.”

Manchester City will find out who they will share a Champions League group with on Thursday evening, and Jovetić insists his team are prepared for anyone.

“We will see who we get it – we are afraid of no-one. Of course it would be better if we got some of the not-so-good teams in the group, but we will play whoever we have to play.

“We have a really, really good team, and I am enjoying playing with such good players.

“But we have to go step by step. It’s too early to speak about titles or the Champions League, but for sure we are going to attack all of those.

“We are a good team, with good players, and we can do it.”