Romelu Lukaku scored his 50th Everton goal on his 100th appearance to rescue a point for the Toffees against Crystal Palace on Monday night.

Scott Dann's header gave Palace the lead in the 76th minute before Lukaku earned Everton a deserved point after the Blues hit the woodwork three times.

Everton dominated possession and moved the ball around confidently in the first-half, with Ross Barkley seeing his curling effort drift just wide of the post after only seven minutes.

Palace tried to exploit the wide areas and swung in countless crosses from both flanks, particularly Yannick Bolasie. Ramiro Funes Mori did well to intercept the winger's cross from the right; before Tim Howard was forced into a fine reaction save to deny Connor Wickham from point-blank range in the 16th minute after good work from the DR Congo international. 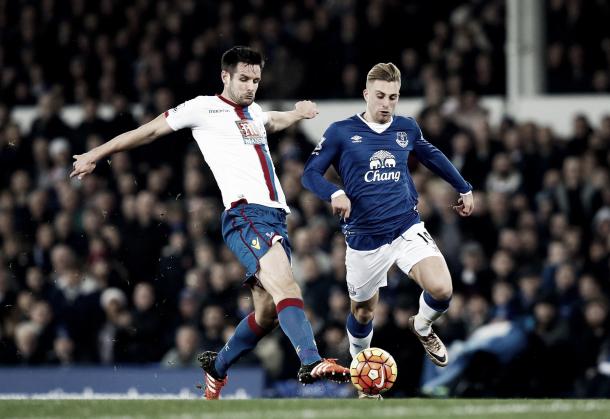 Gerard Deulofeu battles with Scott Dann for the ball.

However, Everton continued to dominate possession and they were nearly rewarded in the 21st minute, but Lukaku saw his shot hit the inside of the post. The ball then ran right across the face of goal, but fortune was on Palace's side as it rolled to safety and not in off the other post.

Gerard Deulofeu had plenty of joy on the right wing in the first-half but he failed to work his magic that saw him score and assist another goal in the League Cup in midweek, with his final ball not always finding team-mates.

Everton struggled to find a way past Palace's organised back line in the second-half.

Barkley headed just wide from Arouna Kone's cross in the 52nd minute, before Howard came to Everton's rescue minutes later one more, the goalkeeper denying Bolasie with his legs.

Everton were thwarted by the woodwork for the second time just past the hour, albeit this time without actually getting a shot off as Wickham headed the ball against his own crossbar from Barkley's free-kick.

It was then the visiting 'keeper denying the Toffees, Wayne Hennessey producing a brilliant diving save to tip Tom Cleverley's powerful shot over the crossbar moments later.

Despite the hosts being in control, Dann, who scored the winner against Liverpool last month, rose highest to head past Howard from Jason Puncheon's corner to give Palace the lead against the run of play with 15 minutes remaining.

Everton almost replied immediately but they were to be denied by the crossbar for a third time, Lukaku's stunning strike from outside the box cannoning back off the woodwork.

It looked like it was not going to be the Belgian's night, but he continued to work hard and was to get his moment as a result, tapping Deulofeu's low cross past Hennessey for his 50th goal in Everton blue.

Both teams searched for a winner; Jordan Mutch saw his shot go wide before Kone's shot was deflected behind, the latter the last kick of the game as the spoils were shared at Goodison Park.

Everton 1-0 Southampton: Richarlison scores to condemn Saints to another defeat 7 hours ago

Liverpool vs Everton preview: How to watch, kick-off time, team news and predicted line-ups 10 days ago

Michael Keane: 'We want to make our own history' 17 days ago