Speaking at his pre-match press conference on Saturday, Ancelotti said:

"All three [Holgate, Mina and Delph] are out for the rest of the season. We only have eight days left and they will not be able to recover.

"When players have injuries we are always disappointed but we've had a lot of games and, honestly, we were lucky in this aspect."

Trio will miss rest of season

Injuries to two senior centre-backs means Everton will likely turn to 18-year-old Jarrad Branthwaite to make his first start of the season against Sheffield United on Monday. The January signing from Carlisle United has feature twice for Everton since the lockdown and put in a man of the match performance in against Aston Villa on Thursday when he came on for the injured Holgate.

On Branthwaite, Ancelotti said: "We have confidence in him and so it can be good for us and for him to play these games. 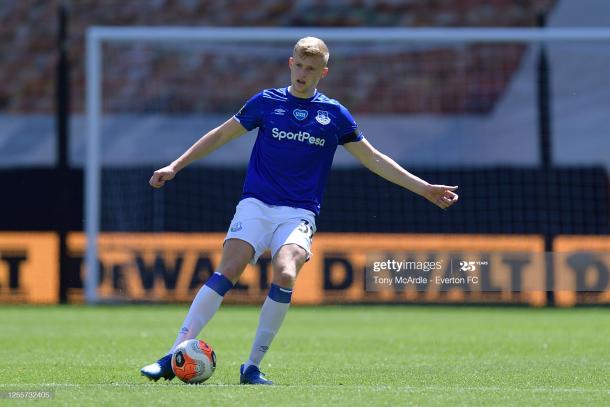 "Against Aston Villa he did really well considering the fact that he's really young. He's showing in his play character, personality and concentration. He can be a really good player, I'm sure of this."

There have been growing calls amongst Everton fans for Ancelotti to play more of the younger players in the remaining two games of the Premier League season. Beni Baningime is a name that has been mentioned as someone who could be pushing for a starting place in the last two games, as well as young midfielder Dennis Adeniran.

Everton 3-0 Salford City: Sirgurdsson shines as Everton progress into next round2 days ago

Can Ancelotti get James Rodriguez firing one more time?10 days ago

Moshiri digs deep again but will it reap rewards for Everton?11 days ago

What is it like working with your son? Carlo Ancelotti explainsa month ago

Ancelotti aiming for "evolution" at Everton this summer2 months ago

Carlo Ancelotti: This is just the start for Jarrad Branthwaite2 months ago
Restore your password
Please enter your user name or email.
Login Member or Writer Panel
Enjoy your own Customized Newspaperwith VAVEL topics' carousels!