Buxton wrote their names in the history books with an 85th minute winner from Diego De Girolamo at the LNER Community Stadium where they produced a huge upset versus York City, who were deservedly beaten.

Coming off the back of a 4-0 drubbing of Blyth Spartans, York City, who are currently placed 9th in the National League North, were back in action in the Emirates FA Cup with a tasty first round tie against high flying NPL side Buxton, who had recently been involved in a managerial crisis.

The visitors are yet to lose in the league this season, with them sitting in fourth place but with four games in hand to play. Buxton recently fell to defeat in the FA Trophy against Colne but their hopes remained high in this competition. 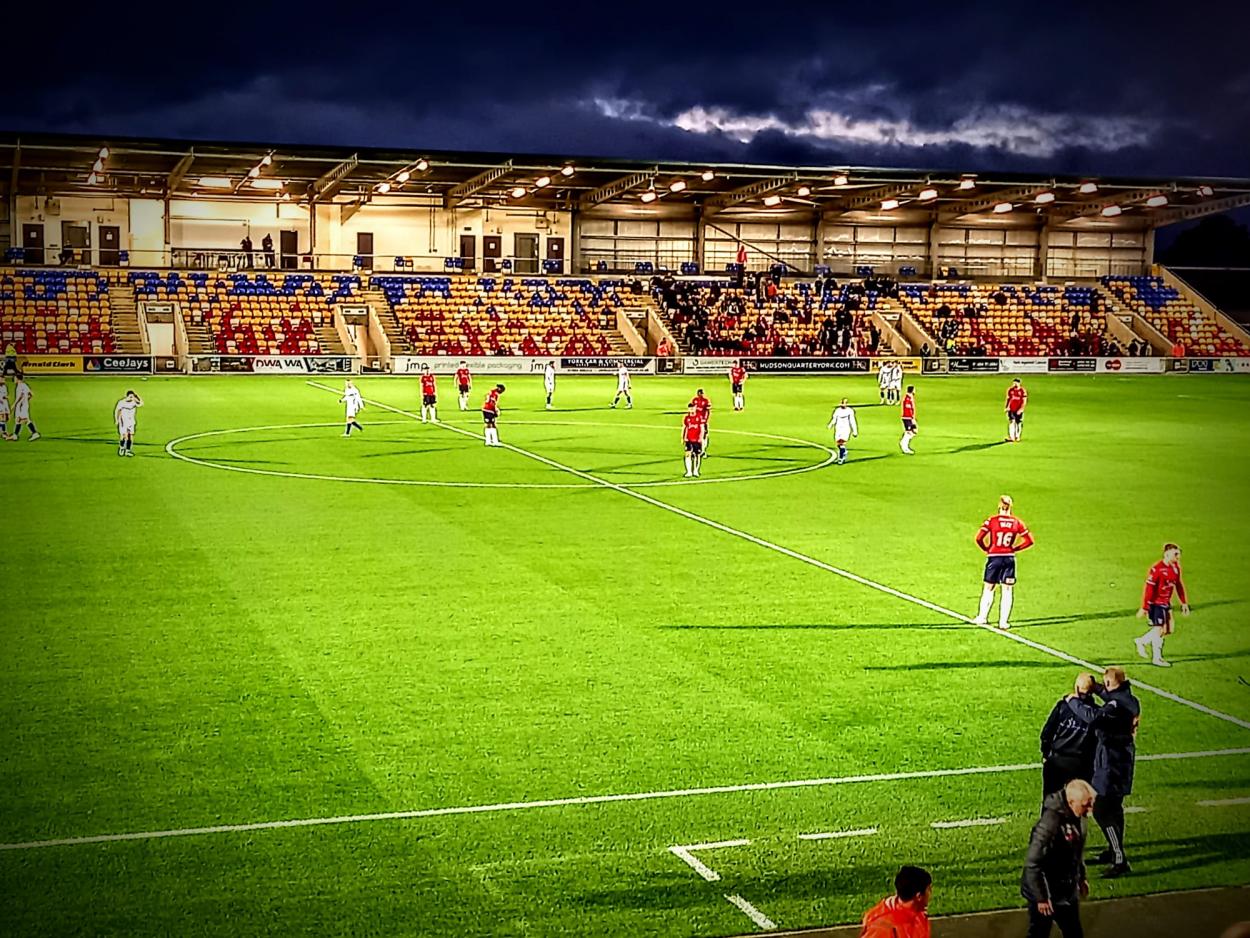 These were the teams:

Straight from the off, Buxton threatened the City goal with an early shot blocked, the strong wind playing a huge part as Buxton continued to attack.

However, 23 minutes in and York were given a golden chance, Mackenzie Heaney's cross finding the head of Donaldson who's header was tipped over the crossbar by goalkeeper Theo Richardson.

Olly Dyson tried his luck 10 minutes later with a volley towards the bottom corner but his strike was driven just wide of the post.

Towards the end of the first half, the visitors took advantage of The Minstermen's poor defending, coming close multiple times. York goalkeeper Pete Jameson somehow kept the away side out with a string of fine saves, allowing the score to remain goalless at the interval.

Defender Sam Fielding should have claimed his first goal for the club to put York City 1-0 up in this cup tie, shortly after returning to the field, but his point-blank header was magnificently denied by the The Bucks 'keeper.

On the 60 minute mark, former City striker Diego De Girolamo had two opportunities in the space of a few minutes, firstly when he picked up the ball from long range, and had a shot on the half volley which drifted a distance over the crossbar. Then he was played through, but when faced with a 1 on 1 with Jameson, he couldn't convert and De Girolamo's attempted chip went wide of the post.

It was looking like one goal would win it and that goal went the way of Buxton and main man De Girolamo claimed it, sparking a bit of madness in the packed out away end. Clarke got the ball from a York clearance and played in the striker who turned and fired in a shot out of Jameson’s reach and made its way into the far corner to give Steve Cunningham’s side the advantage with 5 minutes of normal time left to play.

Two minutes later, the long throw weapon was used for York in search of an equaliser and Jason Gilchrist had found the back of the net for his first York City goal however referee Aaron Jackson had it chalked off for an alleged foul.

Deep into added time, Sam Fielding had his second headed chance of the game but Buxton keeper Theo Richardson did well to keep it out and gathered it to confirm his clean sheet and Buxton’s FA Cup progression.

It was a very disappointing day for The Minstermen after they squandered their chances and hopes in the Emirates FA Cup. Manager Steve Watson admitted that his side were poor and mentioned that their performance, “just wasn’t good enough.”

City return to league action with two rare away games in the course of the next week. On Tuesday night, they travel down to Warwickshire where the side will face Leamington before making their way to the Tameside Stadium on Saturday where Curzon Ashton are the opponents.

The Warmdown: Arsenal struggle to a draw against Burnley 6 hours ago

"On another level to us": Antonio Conte key quotes in post-Chelsea press-conference a day ago

"It was one of his best matches": Thomas Tuchel key quotes in post-Tottenham press-conference a day ago

Chelsea 2-0 Tottenham: Hakim Ziyech stunner sets the tone for a big win a day ago