No team has ever been under more pressure going into a tournament than the 2014 Selecao. It has been twelve years since Brazil's last World Cup win and whilst the pressure will always be on any Brazil side that goes to a World Cup there is much more on this team as they are attempting to win it on home soil.

Brazilians are famous for their love of the national team and when the World Cup comes around the country comes to a stand still and everyone gets behind the Selecao. In recent World Cup's the players could be guarded from the hype due to the distance they were from home but in this tournament the players will be living amongst it.

None of this year's squad played in the 2002 World Cup when Brazil were last victorious but their head coach, Luiz Felipe Scolari held the same role in 2002 and knows what is required to win the biggest tournament in sport.

The dress rehearsal was last summer when Brazil won the Confederations Cup, winning all five of their games including three against former World Cup winners (Italy, Uruguay and current holders Spain). The players coped with the pressure well then and the atmosphere generated by the home support was second to none but this summer will be on a completely different level.

Scolari has a reputation for selecting "his" players and the Selecao with him in charge has has often been referred to as the "Familia Scolari" (Scolari Family) as big Phil keeps a close knit group of players that he trusts to do the job required. The 2014 group will be no different and here are the men entrusted to return Brazil to what many believe is their rightful place as World Champions.

Scolari's first choice goalkeeper will be Julio Cesar of Toronto FC (on loan from Queens Park Rangers). Cesar has endured a difficult time since leaving Inter Milan in 2012. He got relegated from the Premier League with QPR before getting frozen out of the team. He eventually got a move to Toronto FC in March and has been playing regularly since.

His backup will be Jefferson of Botofogo. He has European experience from four years spent in Turkey but will only play if Cesar gets injured or suspended. The third choice goalkeeper is another veteran, Victor of Atletico Mineiro. Some believed Scolari should have took a younger option but in typical Scolari fashion he is taking no risks and has gone for the experienced options.

Some previous Brazil sides have gone for three central defenders but Scolari will play a back four consisting of two central defenders and two attacking full backs. The starting centre backs will be captain, Thiago Silva and David Luiz. They have formed a formidable partnership and it looks likely that they will be playing alongside each other at club level too. Paris St Germain have had a bid accepted by Chelsea for David Luiz and it looks like a formality that the transfer will go ahead. It should strengthen their partnership but this World Cup looks to be their best opportunity for success as they will both be in their thirties by 2018 and with the likes of Dede, Marquinhos and Doria coming through it is unlikely they will still be first choice.

On the flanks Scolari will go with La Liga duo, Dani Alves of Barcelona and Marcelo of Real Madrid. Alves looks likely to be leaving Barcelona this summer and has also been linked with a move to PSG or Monaco. Marcelo has just won the Champions League and got a goal in the Final when he took advantage of a tired Atletico defence to hammer home.

Some had suggested that Scolari wouldn't pick a back up left back to allow him to take an extra midfielder but he has gone with like for like replacements and should any of his starters get injured he has a more than capable replacement available. Roma's Maicon and PSG's Maxwell are his backup fullbacks and in the middle he could call on Dante or Henrique. Dante would be good enough to start for most international teams but Scolari has faith in Silva and Luiz so the Bayern star has to make do with a place on the bench. Henrique was one of the more controversial call ups with many favouring Marquinhos or Atletico Madrid's Miranda but Scolari once again chose "his" man by taking Henrique who played for him at Palmeiras. Henrique's versatility will have also helped as he is as comfortable as a defensive midfielder as he is at centre back.

Brazil will play a 4-2-3-1 formation but the two wide men in the attacking midfield will play more like forwards and the midfield will consist of three central players all with very different roles. Scolari is expected to stick with the men who won the Confederations Cup last year which will mean starting roles for Luiz Gustavo, Paulinho and Oscar.

Luiz Gustavo will be the destroyer in midfield and will be expected to sit in front of the defence and break up the oppositions attacks. Paulinho will join him in centre midfield but he will have more license to get forward and will be a box to box player. Oscar will play ahead of those two and he will be responsible for providing the front men with the ammunition to get goals. Oscar has a very good goal scoring record himself with nine goals in twenty-nine games.

The rest of the midfield places have gone to Fernandinho, Hernanes, Willian and Ramires. Fernandinho could provide cover for either Luiz Gustavo or Paulinho although he didn't really impress when playing in Gustavo's deeper role in a friendly against South Africa and done better when played further forward in the second half. Hernanes came off the bench four times last summer and could cover in centre midfield or in the attacking three. Willian could play in any of the three attacking midfield roles and despite being ahead of Oscar at club level he will be back up for the national team. Finally, Ramires is another who can play in a number of positions. He could cover anywhere in the centre of midfield and at a push could even provide cover on the right.

In the wide positions Neymar and Hulk are the men in possession of the jersies. Hulk has many critics as he can be incredibly wasteful but Scolari has faith in him and he will start on the right side. Neymar is the man that millions of Brazilians are pinning their hopes on. He is still only 22 years old but is already on his way to becoming one of Brazil's all time greats. He has thirty goals for the Selecao and ranks eleventh in their list of all time goal scorers. Five goals in the this World Cup would take him into sixth place ahead of Rivaldo(34), Jairzinho (33), Ronaldinho (33), Tostao (32) and Ademir (32). He hasn't had a great debut season with Barcelona due to injuries but he has always starred for the national team and he will be the biggest threat to opposition defenders.

Between Neymar and Hulk will be ex-Lyon striker, Fred. Fred has a good record for Brazil averaging just under a goal every two games. He scored five in the Confederations Cup win last summer and does a very good job of leading the line. He is a good target man and holds the ball up well which allows Neymar and Oscar to get beyond him and into goal scoring positions.

Fred was well managed last summer and was often replaced late in games by Atletico Mineiro's Jo. Jo is in the squad and again he will get the chance to come on late and use his pace against tired defences. Another pacey option among the substitutes will be Bernard of Shakhtar Donetsk. Hulk and Neymar were also subbed regularly last summer and if Scolari decides to rest them again Bernard will get his chance from the bench. 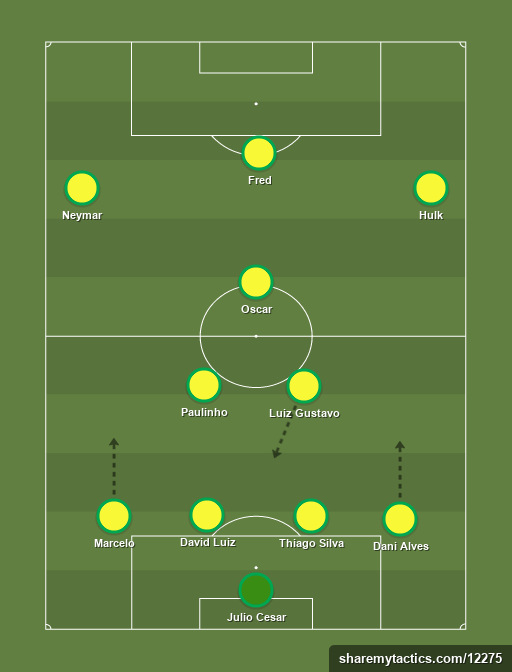 Brazil (4-2-1-3) - ShareMyTactics.com
Create and share your football formations and tactics

Brazil are in Group A alongside Croatia, Mexico and Cameroon. Cameroon look like the weakest of the four and could be the whipping boys. There doesn't look to be much between Croatia and Mexico and the likely hood is they will battle it out for second place behind the hosts. Brazil will have to be on their game from the start though as their first two games are against Croatia and Mexico. There will be no opportunity to ease themselves into the group and if they struggle in the opening games they could find themselves in big trouble.

As hosts, Brazil are more than capable of going all the way. The people expect them to be in the Final in the Maracana on 13th July and in truth anything less would be considered failure.