Asteras Tripolis meet 1. FSV Mainz 05 in the 2nd leg of their 3rd qualifying round for the Europa League tonight in Tripolis, Greece. The German side hold a 1-0 advantage going into the game, courtesy of Shinji Okazaki's 44th minute strike in the Coface Arena, but it's safe to say that they rode their luck at times, with the Greek side hitting the post as well as missing 1 or 2 glaring opportunities with the goal at their mercy.

Highlights of the 1st leg clash between the sides.

The game was the first for the German side under new boss Kasper Hjulmand, after he replaced the much-loved former coach Thomas Tuchel at the Coface Arena during the off-season. Hjulmand, who previously coached Nordsjælland to the Champions League, has gotten his career at the side off to the perfect start. However, midfielder Nicolai Muller earlier completed his move to Hamburg, so Mainz will be without his services this evening.

The unknown Greek commodity, who finished 4th in their league last season, put in an excellent peformance against last season's Bundesliga surprise package, and will be looking to capitalise on any chances this time around after lacklustre finishing cost them last time, in particular an open goal miss from captain de Blasis. A feature that may impact proceedings is that their stadium holds a capacity of just 7,700. 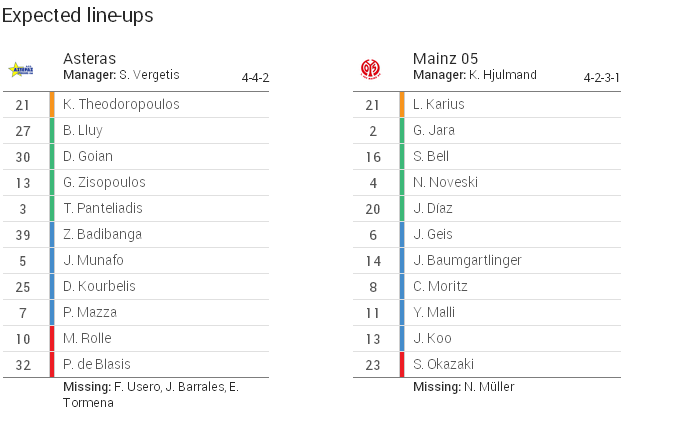 Asteras Tripolis cannot afford to simply sit back and defend due to the fact that they are a goal down in the tie. For this reason, I think Mainz will pick them off on the break and secure their progress to the group stages. It should be an entertaining game to look, and quite the spectacle in the small stadium.

Bayern Munich vs Borussia Mönchengladbach match preview: How to watch, kick-off time, team news, predicted line ups and ones to watch a month ago

SC Freiburg 1-3 Borussia Dortmund: Teenage dynamic duo wrap up all three points for Dortmund after a goalkeeping blunder 2 months ago

Is Karim Adeyemi The Perfect Man For Marco Rose? 2 months ago