Chile won this year's Copa América final, after 120 minutes of football whether neither side could be separated - the fixture was settled on penalties. Arsenal forward Alexis Sánchez scored the winning penalty with an audacious lop over Sergio Romero; sending the whole stadium into euphoria.

It was an end-to-end affair from start to finish, which was to be expected in truth given what was at stake for both sides - their respective names etched in international glory, with only ninety minutes to split either national team.

Fouls galore in a feisty affair

Fouls were flying in thick and fast just minutes after the referee blew the whistle to signal the start of proceedings inside the stadium, with eight fouls being recorded after the twenty minute mark was reached.

Francisco Silva and Gary Medel were the first two players into the referee's notepad with respective bookings midway through the first-half, with bot hsides struggling to settle and stamp their authority on the intriguing fixture.

Opportunities, but no goals to show for it

Argentina, who boast having some of the best attack-minded players in world football, put that to good use as the half continued. Manchester City striker Sergio Agüero was denied by a superb reaction stop by Barcelona 'keeper Claudio Bravo at the near post, after Bravo's club team-mate Lionel Messi fizzed a teasing ball into the box for the maestro to strike.

Paris Saint-Germain forward Ezequiel Lavezzi came on shortly before the half-hour mark, in place of Manchester United winger Angel di María - who was struggling with a hamstring knock that he could not continue with.

Tempers continued to flare after this, with the Argentine attack racing forward in search of an opener. Messi was often frustrated as the Chileans were purposely doing their best to get in his face and challenge him as much as they could with aggressive tackles whenever he was on the ball looking for a team-mate to create space for. 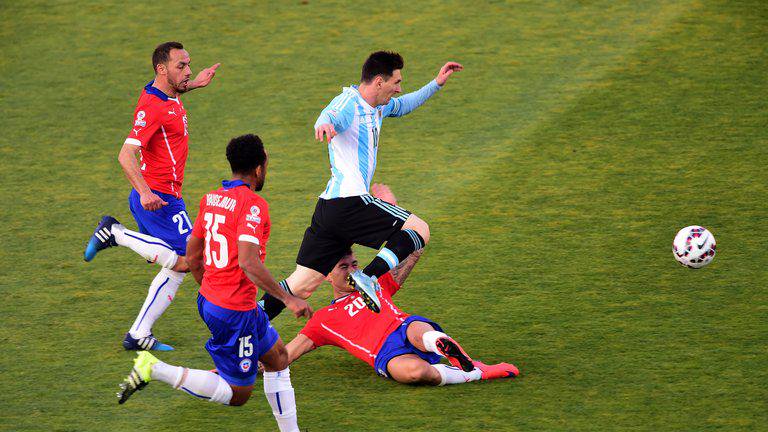 Chile were effective and efficient defensive wise, if not with a hint of rigid defending. It seemed to work, despite the referee constantly stopping play due to the succession of free-kicks being conceded by either side, which proceeded with some uncomfortable viewing. Many players were sprawled across the floor, gesticulating imaginary cards at the officials, and in fairness, the referee did well to keep the spectacle from boiling over - which has happened once or twice already in this feisty competition.

Alexis Sánchez did well to spin past City full-back Pablo Zabaleta inside the box, before curling an effort goalwards. Sergio Romero was alert and equal to the Arsenal man's effort, as the clock ticked down towards the half-time whistle.

Lavezzi was denied in stoppage time, as the winger had a perfect opportunity to break the deadlock with the interval looming. A teasing through ball was thread into the path of Javier Pastore, and after skillfully beating his marker near the byline, he unselfishly cut the ball back for Lavezzi, his club team-mate, who was running into space to strike. However, the resulting effort was fired straight into Bravo's path, where he could parry the strike away from goal and Chile could hack the ball clear.

As the second-half began, neither side made any alterations. Sánchez was almost immediately on the ball, whipping in a dangerous delivery towards the path of Juventus midfielder Arturo Vidal - who saw his header comfortably caught and smothered by the goalkeeping gloves of Bravo.

Mauricio Isla, formerly of Queen's Park Rangers and Juventus, was taken down with a cynical chop by United's Marcos Rojo - who could have no complaints with his booking as it was not his first offence of the game. Then, just a minute later, Javier Mascherano was penalized for an apparent handball, which he was visibly frustrated that the decision had gone against him. Replays showed that although it was not deliberate and his arms were by his side, it did strike him, so the referee was not particularly wrong to blow the whistle for a free-kick.

Charles Aránguiz, who has been heavily linked with a Premier League move to either Arsenal or Manchester City, stepped up to flick a teasing delivery into the box. However, his set-piece was poor in truth and his team-mates could only watch on with disappointment as the ball hit the first Argentine in the way, and was cleared to safety.

Minutes later, Chile came close to breaking the deadlock once more. Sánchez showed good resillence to sprint past Valencia centre-back Nicolas Otamendi near the edge of the box before cutting the ball back into the path of Vidal. He controlled it down with his chest before shaping to strike, but a vital block deflected the ball away and out of danger.

The home fans were in full voice for their side, and sensed that the result was there for the taking. Argentina had the better attack on paper, but were not making full use of that, so it'd make sense if La Roja could prevail if they stayed firm defensively and took their chances clinically on the counter attack - something they've done often already in this year's competition.

The clock continued to tick down, and with twenty minutes left, something had to be done. Tata Martino was looking at his subsitutes' bench, and saw Napoli striker Gonzalo Higuaín itching to make his mark on the evening's action. He was introduced, in place of Agüero - and just a minute later, Vidal was stretchered off in an injury buggy after a savage-looking rash challenge by centre-back Martin Demichelis which caught the midfielder's knee in a painful position.

Like the braveheart he is, Vidal limped back on the pitch just two minutes afterwards with a change ready in the offing in-case he needed to be replaced. He should have had a penalty-kick awarded in his favour, after another wild tackle on him by Demichelis - who was lucky not to be disclipined or give away a penalty in the crucial stages of the match. Jorge Valdivia was replaced by fellow midfielder Matias Fernandez with fifteen minutes left to go for La Roja, as Jorge Sampaoli's men were in search of a late winner to send the crowd into raptures. Sánchez came narrowly close to scoring what would have been one of his best goals to date, after a neat ball into his path fed through by Aránguiz. He hit it first time on the volley sweetly, with a lovely technique which flashed past Romero in the goal, but watched on in agony as his effort fired an inch or two past the far post as the crowd held their breath.

With the fourth official signalling for two minutes of stoppage time to play, the possibility of playing extra time was seemingly becoming a reality. With the last kick of the game, Argentina had their best chance yet - Lavezzi sprinted down the line towards goal, fed through a pass towards Higuaín, but somehow the Napoli forward could only watch on in frustration as he scuffed the strike wide into the side netting with the far post gaping to aim at.

The two sides' respective team talks proceeded shortly afterwards, with Higuaín's miss obviously still looming large on his team-mate's minds as they could have easily secured glory without the prospect of another thirty minute spell to decide their fate. Lavezzi was perhaps too selfish in squaring into Gonzalo's path, where the winger could have just opened up his body and curled one into the far corner of the net - but it's easier said than done.

As the referee blew his whistle to signal the start of extra time, penalties were instantaneously on everyone's minds. Fouls continued to break up play and just a minute in, Sánchez showed his fancy footwork to frustrate the Argentine backline once more. He was deliberately shoved in the back by Zabaleta as the ball was trickling out for a throw-in, yet the City man went un-punished for his cynical foul.

Chile made their second change of the match, with Angelo Henríquez coming on in place of Eduardo Vargas in the 95th minute. Just three minutes later, he was unlucky not to get an assist to his name after some great build-up play between himself and Marcelo Díaz on the edge of the box with quick passing and one-two play splitting the opposing backline. However, Díaz's resulting shot flashed wide of the goal, flying over the crossbar.

Sánchez was unlucky not to score - watching on as his strike fired narrowly over the crossbar with Romero in no man's land as the referee blew his whistle to end the first-half of extra time.

As the second-half of time began, nothing seemed to separate the two sides. Brave blocks, crucial interceptions, half-chances and more fouls galore, but the scores stayed level as the clock edged ever closer to the 120th minute mark. As the referee inevitably blew, that was it. 0-0 after TWO hours of football, remarkable given the circumstances, but an intriguing game nonetheless.

Penalties were up next, to seal glory

Matias Fernandez, Lionel Messi and Arturo Vidal all stepped up - all netted their respective penalties. Fernandez's effort was a thumping drive, Messi with a cooly slotted effort and Vidal, who was arguably lucky to see his strike hit the back of the net.

Then, we had Gonzalo Higuaín. Having missed a clear-cut opportunity to settle the tie in stoppage time before extra time, he stepped up for his spot-kick. Luck was clearly not on his side - he struck high and wide over the crossbar with Bravo celebrating as though the result was already secured.

Charles Aránguiz was next up, and his effort was nicely placed into the corner of the net. Nothing that Romero could do, in fairness. However, Messi must have been looking on in disbelief as Ever Banega had his spot-kick, albeit a poor one, thwarted by Bravo as the Barcelona 'keeper dived to his left and parried the ball.

Alexis Sánchez, Arsenal's fan favourite was up. If he scored, Chile would seal a famous victory - their first ever Copa América win. Sánchez did just that, with an audacious penalty chip which wrongfooted Romero with a cutely-struck Panenka into the bottom corner of the net, sending the whole stadium into sheer delight.

As for Argentina, it'll be nothing but bitter disappointment on the night as they had plenty of opportunities to be victors against the hosts, who certainly had the fans backing on their side. Two cup finals in the space of twelve months, and two second placed finishes.

Brazil 1-0 Switzerland: Casemiro fires Selecao into Round of 16 8 hours ago

Spain 1-1 Germany: Fullkrug strikes against Spain to give Germany hope a day ago

Three things we learnt from England vs USA a day ago