Leipzig come into this contest in high spirits after a famous midweek victory, as Die Roten Bullen beat Manchester United 3-2 to advance to the Champions League round of 16.

The same cannot be said for Bremen, as they had their worst showing of the season last time out, losing 2-0 at home to Stuttgart. The Green-Whites haven’t won a game in over three months, and they could find themselves back in a relegation fight if things don’t improve soon.

Leipzig are dealing with a number of issues on the injury front. Lazar Samardzic and Hwang Hee-chan are both out due to COVID-19 concerns, while the likes of Benjamin Henrichs, Lukas Klostermann, and Konrad Laimer are all unavailable because of knee injuries.

Bremen, meanwhile, will still be without top scorer Niclas Fullkrug and the dynamic Milot Rashica. There are also questions surrounding Davie Selke, who is currently listed as doubtful with a thigh injury.

Alexander Soloth
It’s been a tough start to life in Leipzig for Alexander Sorloth.

Coming to the club over the summer with plenty of hype, he’s just not been able to get going. After thriving on loan at Turkish side Trabzonspor from Crystal Palace, the Norwegian had become one of the top scorers in all of Europe. Plenty of teams were after him, but it was Die Roten Bullen who ultimately secured his signature.

He’s yet to score in the league, though, which is a concern since he’s already made seven Bundesliga appearances. Sorloth did get his first goal for Leipzig just over a week ago, as his strike in the 92nd minute was the winner against Istanbul Basaksehir in Champions League play.

However, there’s a good chance Sorloth could turn things around at the domestic level this weekend. Bremen are notoriously bad at defending against aerial threats as they lack real height at the back. If the forward is clever, he’ll be able to find space in the area before pouncing on it.

Sorloth may lack confidence at the moment, but a few goals on Saturday could get him back in form.

Without the likes of Fullkrug and Rashica, they looked last time out. Passes were misplaced, and any attempt to dribble by a defender was shut down quite quickly. They created very little as a result, and things will only be tougher this weekend as they go up against a solid Leipzig backline.

Cue Leonardo Bittencourt. The experienced Bundesliga man looked good to start the campaign, but he has fallen off as of late. It’s almost like he disappears during games, unable to make an impact unless he’s in top form.

That’s just not acceptable given his potential quality, though. On his day Bittencourt is an absolute nightmare to defend against, able to pass and shoot with either foot. He isn’t the quickest anymore, but he makes up for it with some clever movements on and off the ball.

He needs to be a leader for this team. If Bittencourt shows up this weekend, then Bremen have a decent chance of nicking a result. However, if he doesn’t, then it’s going to be a long afternoon for his side.

The two games these sides played last season weren’t close as Leipzig won 3-0 on both occasions.

In the opening contest at the Wohninvest Weserstadion, Willi Orban headed home from a corner early on before Marcel Sabitzer smashed a free kick into the back of the net to double the advantage within 35 minutes. Leipzig did go down a man when Konrad Laimer was shown a second yellow, but that setback would not phase them as Marcelo Saracchi finished off the scoring with about ten minutes to go.

The reverse fixture at Red Bull Arena was more of the same. Bremen conceded from another early set piece as Lukas Klostermann got on the end of a loose ball in the area to convert from close range. A corner before halftime picked out Patrik Schick who made no mistake with the finish, and Nordi Mukiele made it three moments after the break.

There was just a gulf in class between the two sides, and that was proven by these results and their respective league positions at the end of the campaign.

The contest won’t be aired in the UK, but fans in the United States will be able to see the game on ESPN+. 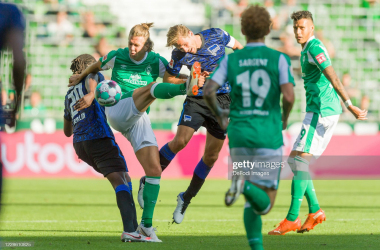 Hertha Berlin vs Werder Bremen preview: How to watch, kick off time, team news, predicted lineups, and ones to watch3 hours ago

Jovic has a point to prove17 hours ago

Borussia Monchengladbach vs Werder Bremen preview: How to watch, kick-off time, team news, predicted lineups and ones to watch.3 days ago

Bundesliga Transfer Roundup Week 2 - Looking at who has gone where in Germany3 days ago
Restore your password
Please enter your user name or email.
Login Member or Writer Panel
Enjoy your own Customized Newspaperwith VAVEL topics' carousels!