Rafael Nadal isn't human. He simply cannot be. He must be a robot or something because he's just that damn good at what he does on the dirt. It is never in doubt, not even for one minute that when he steps on the court, he will own it and put his own stamp on it. This is just one of the many reasons why he is the undisputed King of Roland Garros.

Today he won his ninth French open title. Yeah you read it right! He won his ninth Roland Garros title. To come back year after year and win like he does is just incredible. You have to respect and admire him for that. He is a formidable athlete and it's highly unlikely that we will see another player of his calibre on clay ever again.

Coming back from two different injuries that could have ended his career, he continued to battle his injury demons to win the French Open year after year. He doesn't just win at Roland Garros. Nadal doesn't do just winning here. He won in style, in a way that only Nadal can on clay. Rafael Nadal IS Roland Garros and while he lives and breathes that won't be changing any time soon.

The scene was set. Philippe Chatrier was full and it was time for this year's Roland Garros final. This is the final that most people picked when the draw came out and it definitely didn't disappoint.

There were good points, really bad points and some really excellent points during the match. Djokovic was the one that drew first blood, taking the first set in really tame circumstances with Nadal making a few forehand errors to give the Serb the advantage. It was definitely a slow start for the Spaniard. He had an opportunity to break back but squandered break points and the set was gone. 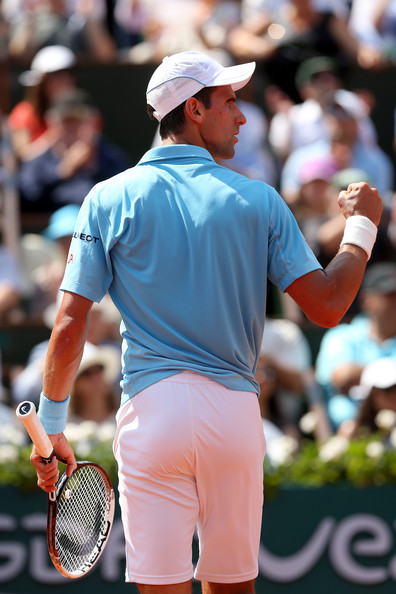 One thing I've learnt in tennis over the years, is don't count out Rafael Nadal. Never! Even if he looks dead and buried, he will force his way back and be reborn. He did exactly that in the second set, raising his level significantly to take a 4-2 lead. Nadal thought he had broken Djokovic before this, hitting a forehand thinking it had hit the line. It was checked by Pascal Maria and was ruled out bringing the score back to deuce. Nadal shrugged it off and broke anyway.

An uncharacteristic service game from Nadal gave Djokovic room to get back into the set and allowed him to break back, levelling the score at 5-5. The then eight times Roland Garros champion did what he does best, breaking to take the second set 7-5. He was right back in this. As if he was just going to lay down and die. Champions don't do that!

It was all Nadal in the third set, playing some fantastic clay court tennis and serving well when it mattered to take the third set 6-2 with Djokovic fading fast. There was more of the same in the fourth set with Nadal taking control at 4-2. Now in some discomfort, doubling over when serving he was broken back and it looked like there was going to be a revival for Djokovic. It wasn't to be though as another less than impressive service game from the Serb gave Nadal match point. Djokovic then double faulted on match point reminiscent of the 2012 final and Nadal was King Of Roland Garros once again. 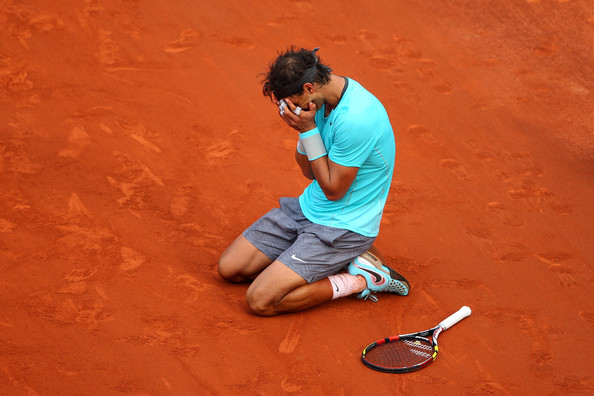 Talking about the match Nadal said "Well, I tried to do my best all the time, no? I know to play against him I need to play to my limit, I need to play aggressive. But is always the same thing, no? To play aggressive and to play that shots, you need to be with confidence, you need to feel the ball. Sometimes you don't have that great feeling. It's more difficult to produce these kind of shots, no? Is true that at the beginning the match start very equal, but I felt that the match was more in his hands at the beginning than in my hands." 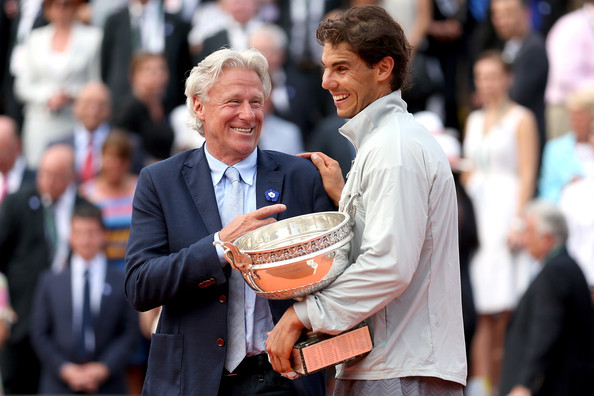 On Djokovic double faulting to lose the match and championship "It's difficult. At that moment you cannot feel that was a double fault. Only feeling is you won Roland Garros, no? That's the real thing. Sorry for him. Was a little bit unfair what happened in the last point between his first and second serve. Happens sometimes in the big stadiums. Is nothing wrong with the crowd, but that can happen." 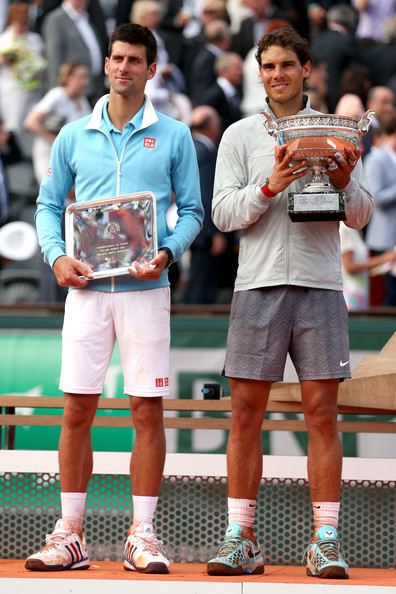 On winning Roland Garros nine times "Well, to me, this really shows that I'm fully engaged, committed. It's always been the case since I have started my career. I have won it nine times. That's because I really wanted this. You know, when we say where there is a will, and this is what I did. You do your best to attain your objective. This is what it means. You do your best to meet your objective." 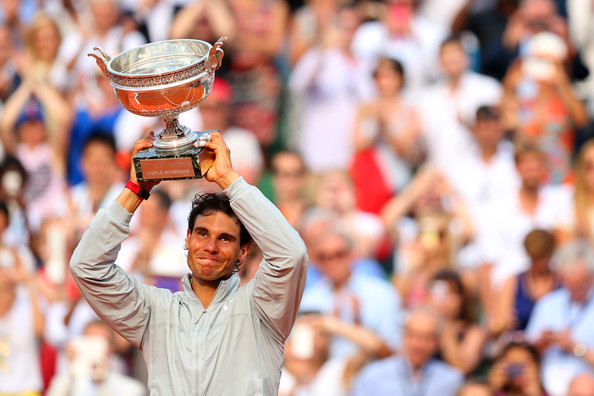 Let's cut all the asterisks away – both players weren't at their physical best that is true, but it is often the survival of the fittest in tennis, and on this occasion Rafael Nadal prospered. This title shouldn't have an asterisk next to it just because Djokovic wasn't in the best of condition. Nadal wasn't exactly a picture of health as he was cramping in the fourth set and still managed to win. Excuses shouldn't be made. Rafael Nadal won because he fought back like a champion and started playing like he is capable of playing on the dirt. That is why he was victorious.

Winning this title today means that Rafael Nadal has tied Pete Sampras on 14 grand slam titles and is now only 3 major wins away from equalling Roger Federer at 17.

As I've stated before, I am a Roger Federer fan so it may surprise you what I'm about to say.

I don't buy into the "Greatest Of All Time" debate at all.

Roger Federer is a fantastic player in his own right and that is plenty good enough for me as a fan. To me there can't be a greatest of all time title awarded because 'all time' hasn't happened yet. It is also unfair to compare eras because tennis has changed so dramatically over the years.

Rafael Nadal is also a phenomenal tennis player in his own right and if he ties or even beats Roger's slam record then so be it. He has definitely earned a place in tennis history over the years. I'm not about to take that away from him by claiming Federer is the best of all time whilst dragging Nadal's name through the dirt. I am just not going to do that. Both are formidable at their chosen sport. Let's leave it at that.

Nadal now goes to Halle in Germany to prepare for Wimbledon. He seems optimistic and upbeat about his upcoming grass season

"I want to try to play well again in Wimbledon. I'm healthy. That's the most important thing, I feel. I hope my knee will have the positive feeling on grass, because I feel my knee better than last year in the rest of the surfaces. Grass always was a little bit harder for me after the injury. I get injury here in 2012; I played 2012 Wimbledon with that injury. I never played a match after that Wimbledon. Last year I tried, but I was not enough ready to compete in Wimbledon. Let's see how is my feelings there this year, but it's very important tournament. For me, is a tournament I really love so much, so after the match of today and after how tired I am, after a little bit the back problem that I had during the whole tournament, is in a strong position to go to Halle."

One thing is for sure, a healthy Rafael Nadal spells bad news for the rest of the field. Will the King Of Roland Garros conquer Wimbledon too? Only time will tell... For now, the only thing that is certain is that Rafael Nadal is once again the King of Roland Garros.

Thank you very much to Gemma (@GKilgallon) for allowing me to use her beautiful Nadal graphic. All credit and ownership goes to her.