Once again Andy Murray met Novak Djokovic in a final. This time it was the Madrid Masters, where the Brit was the defending champion.

Murray had dropped only one set en route to the final and that as in round two against Radek Stepanek. Even in the semi final against the "King of Clay" Rafael Nadal, the Brit was in imperious form. The world number two became the first player to ever beat Nadal at the same event in back to back years. Taking Nadal out in straight sets, on clay is impressive, and the Brit did it twice.

The Madrid final last year had Nadal on his comeback from surgery, so he certainly wasn't at his best. Murray has improved on clay recently and last season earned his first two titles on the red dirt. In what is admittedly the Brits worst surface, Murray has been in exceptional form. Losing in the semi final in Monte Carlo to Nadal, the Brit avenged that loss in the Madrid semi final.

Djokovic on the other hand, had not dropped a set en route to the final, his trickiest match was the semi final against Kei Nishikori who managed to force a second set tiebreak after the Serbian was unable to serve the match out. The world number one came through the tiebreak relatively easily to set up the final with Murray.

This looked to be going just one way as the Brit was broken in the very first game. The Serb then held his own service game to be in a two games to love lead. Murray did manage to win a couple games in the set, making Djokovic work hard and more importantly avoiding both the bagel and breadstick sets that have been common  with Djokovic matches before

Murray got off to the best of starts, he broke the Serbian early and raced out to a 4-1 lead. The Brit was not going to let go of the set, despite the best efforts of Djokovic. Trying hard to break back the World number one pushed the Brit hard in the service games. Murray held firm, and with a very much improved second serve held on to level the match taking the set 6-3. 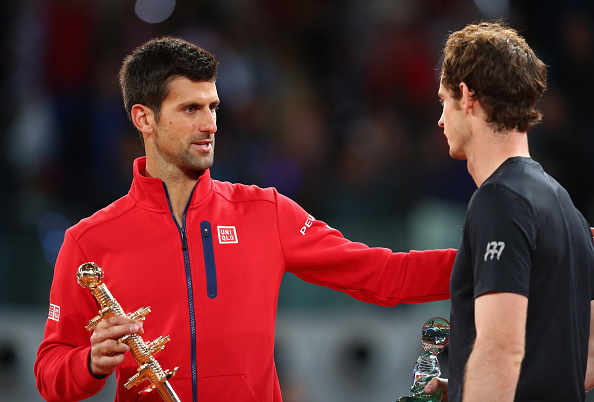 In the vital deciding set, Djokovic started the same as the first and broke Murray at the start. This time, the Brit managed to break back and get back on serve. The world number one broke again, however, and was looking in supreme form. Murray in the past, would have folded at this point, but the Brit was not going down without a fight.

With Djokovic serving for the title, Murray battled hard. Making the Serb work for the victory the Brit had seven break points in the final game. Unfortunately Murray was unable to convert them and eventually Djokovic had another match point which he won.

With the loss, Murray will drop to number three in the world rankings, behind Roger Federer. The pair are on the same number of points, but due to Federer scoring better in the slams last year, he is ahead. However, in Rome next week, the Brit is only defending 90 points, having pulled out of the event after winning his second round match with fatigue. Federer on the other hand will need to win the event to prevent Murray regaining the second spot in time for the French Open.

There are many positives for the Brit to take from this match. For a start it is clear Murray has been working on his second serve, as it appears faster than before and much closer to the 100mph mark. Taking a set from the world number one in a masters event on your worst surface, after reaching the final only dropping one set along the way should also be a big boost for the Brit

The way Murray has played on the clay should stand him in good form for the French Open and the best of five format.