The start of the third and final Grand Tour in cycling has almost arrived.

After Richard Carapaz (Movistar) won the Giro d'Italia and Egan Bernal (Team INEOS) triumphed at the Tour de France, who is next to take glory at the Vuelta?

Only in its 74th edition, La Vuelta is always unpredictable (as is any cycling race!) with day-after-day ascents and potential for contenders to suffer to much.  Below are some names to keep and eye out for and some contenders who could wear the red jersey in Madrid after 21 brutal stages. 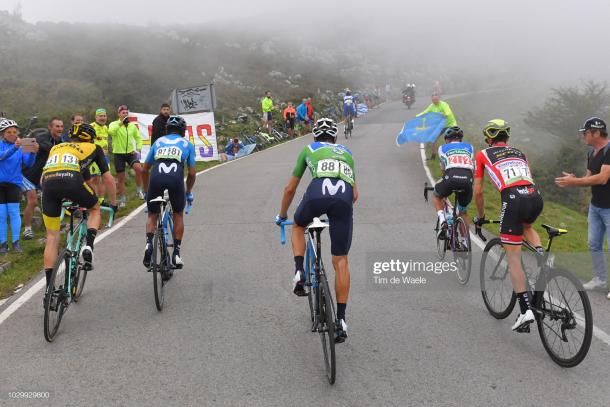 The dark horse. Wilco Kelderman has had an injury-hit season, a year in which he was meant to take on the Giro alongside Dutch compatriot Tom Dumoulin before breaking his collarbone and neck in March. An abandon at the Tour de France didn't do much help either, but Kelderman is back to try his hand in Spain.

La Vuelta has been kind to the Dutchman before. A fourth place overall in 2017 plus a top ten last year resulted in encouraging outcomes. Time trialling is also a strength but with less TT miles at this year's Vuelta, Kelderman may be put at a disadvantage compared to his rivals.

Can he keep up on the climbs? Can he avoid crashes, mishaps and ill-fortune? Supported by a strong team, there's no reason why Wilco Kelderman cannot finish in Madrid close to the red jersey.

2018 was an awful year for Fabio Aru, struggling at the Giro d'Italia as Chris Froome sealed the pink jersey before a nasty crash at the Vuelta this time last season. Surgery in April to help his blood levels this year has certainly helped his comeback though.

At the Tour de France he supported Irishman Dan Martin and on his own managed a decent 14th place behind the yellow jersey Egan Bernal, digging deep and showing that the Italian is on a slow road back to his best.

La Vuelta is a race that brings back excellent memories for Aru, a previous winner of red in 2015. Since that year, he's had highs and lows through no fault of his own. Born in Sardinia and one of the best climbers in Grand Tour cycling, Fabio Aru's Vuelta will be a progression into the new season.

Aru is not necessarily a top contender for the red jersey but for sure he'll want to give everything he can.

Second place at the 2017 Tour de France and that's about all Rigoberto Urán has achieved since! A decent result at this year's Vuelta though could change everything. Aged 32 and a Colombian rider who has the drive, determination and knowledge to ride a Grand Tour is no mean feat for any rider in the modern peloton.

Setbacks earlier in the season meant bad preparation for the Tour de France but overall a seventh placed finish wasn't bad at all. His performance was somewhat low-key and after finishing seventh at last year's Vuelta, Urán is back for more.

If Urán can take on the climbs, reach the summits stage after stage, post respectable times in the two time trial stages and perform better than what he showed in France - then we've got a genuine contender for red here.

American team EF Education First will also be giving Rigoberto Urán all the firepower they can throw at him. Backed by an amazing team that includes young Dani Martínez (tipped to be a future Colombian star) and American Tejay Van Garderen, Urán has to be strong favourite.

The Giro d'Italia this year showed the cycling world a glimpse into what we'd missed from Esteban Chaves - a fighting character, an endless smile and a passionate stage win. Stage 19 into San Martino di Castrozza and there came Chaves, roaring to the line with his family there to surround him. If anything that day at the Giro is so far one of the standout moments from the 2019 season, a moment that has been long overdue in the young career of Esteban Chaves.

Suffering from a broken shoulder in 2017 and then mononucleosis the year after, cycling has missed Chaves's grinning smile and happiness and there's a reason why the Colombian is nicknamed 'The Smiling Assassin'. Wide smiles at the Giro were great to see and after taking time off the bike, Esteban Chaves returns to the Vuelta where he's worn the red jersey before in 2015.

The edition four years previous saw stage wins for Chaves and a collective team spirit within Mitchelton-Scott, something which cycling has become accustomed to in the last two seasons.

Aims for this year's Tour of Spain are simple for Chaves - go for some stages and perhaps target a decent finish in the general classification. Taking the red jersey at some point during the three weeks would be a bonus, winning the overall Vuelta might be slightly out of his reach.

As Mitchelton-Scott ride without their current defending champion Simon Yates, there shouldn't be any pressure for Chaves to deliver. Also keep an eye out for Spanish rider Mikel Nieve, where support for Chaves and stage wins will perhaps be an objective wherever possible.

The last Grand Tour Nairo Quintana will ever ride for Movistar after eight years that saw triumph and setbacks. Before his change in team, will there be one final cheer?

Having won the 2014 Giro and 2016 Vuelta wearing the Movistar livery, Quintana nowadays seems to be a Grand Tour rider unable to show his true grandeur. Movistar just cannot seem to find that one rider to support and the Colombian has subsequently fallen short at the last three Tour de France editions and at last year's Vuelta he didn't compose himself well. Attacking at will is a given with Quintana but then he waits for others, a move that hasn't shown the best results.

He's worn the red jersey before as a former winner three years ago, so can he repeat the feat? Cycling fans and journalists asked the same question last year, so for one last time as a Movistar man can the Colombian bow out with some Spanish glory over three weeks?

Movistar will also include the winner of this year's Giro in Ecuadorian rider Richard Carapaz. Rumoured to be riding for Team INEOS next season, Carapaz could battle it out with Quintana for the team leadership something Movistar could do without! He proved his worth at the Giro this year riding a solid race and never putting a foot wrong across the three weeks in Italy.

With Nairo Quintana already riding the Tour de France could he be too tired to mount a challenge in Spain? Richard Carapaz is another dark horse to keep an eye on.

Britain swept the Grand Tours last year and in 2019 it's South America who could potentially do the same - Ecuador's Richard Carapaz taking the Giro and Egan Bernal becoming the first Colombian to win the yellow jersey. So could Miguel Ángel López help complete the set and win La Vuelta?

López starts as a rider who finished third overall last year and in 2017 made his Grand Tour debut at the Vuelta itself. Two stage wins that year and now a steady progression into a youthful Grand Tour contender means that Miguel Ángel López will be a marked man.

At this year's Giro he was left frustrated with a seventh-place overall and ill-fortune with mechanicals and a spectator colliding with him on the side of the road! López understandably vented his anger by lashing out, but to be frank his performances at the Giro were below his best.

Short of expectations in Italy, can the Colombian revive his climbing legs at the 2019 Vuelta? Backed by Astana Pro Team, he has strong support from Danish rider Jakob Fuglsang who showed stunning form before the Tour de France and then sadly crashing out at the start of week three.

A winner of stages at the Vuelta before, Miguel Ángel López is one of four favourites born and raised in Colombia to win La Vuelta. López himself is the youngest at 25, so could youth play a part in deciding his fate against others?

A Slovenian rider who rides his first Vuelta on the back of a third-place overall at the Giro d'Italia this year. Primož Roglič started 2019 in fine form taking three week-long races in Tirreno-Adriatico, the UAE Tour and the Tour de Romandie but when the Giro came calling he didn't quite have enough to win overall. There was no doubt that he gave it a decent go, holding the leader's pink jersey, taking two stage wins before suffering in the final week.

Primož Roglič is a battler. He's risen the ranks as a former ski jumper into an out-an-out Grand Tour contender. Appearances since 2016 at the Giro and Tour de France mean that this year's Vuelta is only his fifth participation at a Grand Tour.

Growing into a very talented general classification challenger, Roglič will surely win a Giro, Tour or Vuelta sometime in the near future. The question is when? When will the time come? This year's Vuelta could be his time. Two time trial stages that play to his strengths and mountain summits where the Slovenian excels is a recipe for success.

Roglič starts as perhaps the biggest favourite of them all. Backed by teammate Steven Kruijswijk, who finished third overall at the Tour de France, Roglič has all the tools at his disposal to make a serious statement in Spain. He could stamp his authority over his rivals and in Team Jumbo-Visma they could be the team to beat across the three weeks.

On a side note, there's one final rider to watch is Spaniard Alejandro Valverde who rides aged 39 and remarkably still riding a bike! This will be Valverde's 13th appearance at La Vuelta and a significant one too. He wears the rainbow jersey as the current road world champion plus this will be a final partnership together with Nairo Quintana at Movistar. Alejandro Valverde will certainly be cheered on and on by the buoyant Spanish crowds.