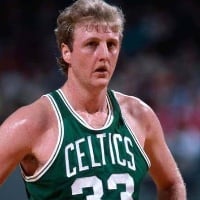 La Great memories come to mind when people see the number 33 jersey in either a Boston Celtics or Indiana State jersey. Little does everyone know that Larry Bird almost never played collegiate basketball. Once a recruit of Bob Knight at Indiana University, the young Bird left IU and became a garbage man. Yes...a garbage man. How could someone who would become one of the all-time greats in the history of the NBA come so close to missing his calling? It was really quite simple - Larry Bird is your prototypical "common man".

Born in the small town of West Baden, Indiana (next to French Lick) - Bird was a quiet kid who lived in poverty from a young age. Basketball became his outlet to escape and he excelled at basketball from an early age. He attended Springs Valley High School in French Lick and was a key component of the school's basketball team, becoming its leading all-time scorer by the time he graduated in 1974.

Bird's high school basketball stats earned him an athletic scholarship to the University of Indiana under Coach Bob Knight. For various reasons he left the campus before the team's first practice, which later would be viewed as one of the biggest mistakes Knight ever made. Letting Bird leave and not chasing after him is something that will haunt IU fans for years. Although Bird leaving could have been for many reasons, one story is that the coach was too cold towards him and that left him not liking Knight.

Knight would later be quoted as saying, “Larry Bird is one of my great mistakes. I was negligent in realizing what Bird needed at that time in his life.” Larry returned home to French Lick, where he also dropped out of junior college. He took a job with the city as a garbage man out of necessity.

Little did Larry know that soon after one man would help shape the course of his life; Bill Hodges. As an assistant for Indiana State at the time, Hodges showed great effort in recruiting Bird back into the world of college basketball. After being turned away by Bird's mother numerous times he then decided to drive up and down the streets and French Lick looking for a "tall blonde kid". Soon after he found "the tall blonde kid" and after repeated conversations, he was able to finally convince Bird to come play for the Sycamores. That truly could have been the most defining moments in Larry Bird's life.

Fast-forward to Bird's senior season at Indiana State. With college averages of 30.3 points, 13.3 rebounds, and 4.6 assists, he was an unstoppable force on the college basketball landscape. However, it wasn't until the Sports Illustrated cover in 1977 that people learned about how great he was. After leading his Sycamores to an undefeated season and a National Championship appearance, Bird was no longer a "secret weapon". The much anticipated duel with Earvin "Magic" Johnson and the Michigan State Spartans would lead to one of the greatest rivalries in all of sports. With the Spartans beating the Sycamores 75-64 and taking the championship, Indiana State's perfect season disappeared.

Everyone knows that Larry Bird turned out to be one of the greatest players of all-time. His jersey hanging in the rafters in Boston is just a small portion of what he achieved through basketball. When he was drafted in 1978, the NBA was struggling. It was desperate for a new age of superstars to bring in fans. That is exactly what both Larry Bird and Magic Johnson did. Their rivalry saved the NBA. Sure Michael Jordan pushed along the success and took the baton, but it was their rivalry that brought the attention.

Along with Johnson, who also entered the NBA in 1979, Larry Bird was a key figure in revitalizing the NBA in the 1980s, and Bird and Alona teams dominated. With some of the most impressive career averages in NBA history of 24.3 points, 10.0 rebounds, and 6.3 assists and a three-time NBA Champion, Bird's style embodied the "common man". Despite a complete lack of athleticism, his knowledge and sheer forced him into conversations with some of the greatest to ever play the game. His concentration and composure were unrivaled and he established himself as one of the most unshakable and driven players in the history of the NBA.

"I wasn't real quick, and I wasn't real strong. Some guys will just take off and it's like, whoa. So I beat them with my mind and my fundamentals." Larry Bird

Some today have the gall to say Larry Bird would not be as successful in today's NBA game. Hypotheticals are not only dangerous, but unnecessary. Why belittle a player who competed his entire career at an elite level? The "Hick from French Lick" was and will always be one of the greatest to play the game. You disagree? Watch this footage and see the poetry of basketball in motion.

Unafraid to back down to anyone, Bird's credentials speak for themselves. He led the Celtics into the NBA playoffs in 12 of his 13 seasons. With the team, he captured the championship three times, in 1981, 1984, and 1986. Bird made the All-Star team 12 times and was named the All-Star Game Most Valuable Player in 1992. For three consecutive years, from 1984 to 1986, Bird was named the NBA's Most Valuable Player. In 1990, he hit a scoring milestone - 20,000 points over the course of his career. Despite all these tremendous feats on the court, there is one thing he does not get enough credit for. What he means to Indiana basketball.

One can speak all day of the greatness of Larry Bird, on his clutch performances, like the steal and assist to Dennis Johnson in the 1987 Eastern Conference Finals.

Or any of the numerous game winners he hit.

The fact is when it came to true grit and determination, few embodied those ideals more than Bird. He acknowledged that he wasn't the most gifted, but he tried his best to make sure he was never outworked. When race was an issue in the NBA, Bird was never one to shy away from addressing the issue honestly.

"As far as playing, I didn't care who guarded me - red, yellow, black. I just didn't want a white guy guarding me, because it's disrespect to my game." Larry Bird

The true greatness of Larry Bird is how he impacted the basketball world, especially in the state of Indiana.

Growing up in a blue-collar town, Bird was never one to shy away from a hard day's work. In fact, the primary reason he was forced to retire was because he shoveled the snow from his mom's driveway. Despite being a star who had made more than enough money, he completed the chore himself. This initial injury would lead to him suffering long lasting effects of back pain that would help usher him into the end of his career. He was an everyday man. He cut his grass, grew a mullet, and had a nasty mustache for a period of time. Don't let the "common man" theme fool you though. Bird endured his fair share of trials. From dealing with the suicide of his father and living in poverty; he encountered numerous setbacks. Yet, he always seemed to overcome them.

Despite the darkness surrounding his upbringing, there are numerous stories that show the killer instinct and humorous nature of Bird. Charles Barkley is known for stating that, "Larry Bird drank me under the table." Bird was also known as one of the most incredible trash talkers. For an example, look at Xavier McDaniel when he was in Seattle. Late in a tied game against the Seattle SuperSonics, Bird told McDaniel, who was guarding him, “I’m going to get it [the ball] right here and I am going to shoot it right in your face.”

As McDaniel remembers it, he responded by saying, “I know, I’ll be waiting.” After a timeout, Bird made two baseline cuts, and then posted in the exact spot he had indicated to McDaniel, paused, turned, and made it in his face. He finished up the sequence by telling McDaniel, “I didn’t mean to leave two seconds on the clock.”

Born and raised as an Indiana boy, Bird embraced his nickname, "The Hick from French Lick". Never ashamed to be himself, he embodied what being a Hoosier is all about. His hard work, dedication, and fiery desire to be the best is something every person can inspire towards. He showcased that no matter the hand you are dealt, that you can make the most out of it. Reggie Miller stirred up some controversy last week when he stated that he would take Bird over LeBron James at age 30. Highly undervalued in today's NBA society, Bird had posted ridiculous statistical feats that season (28.1ppg, 9.2rpg, 7.6apg). Although hypotheticals are dangerous, statistically speaking, Bird had the better year.

In the annals of Indiana basketball lore, Bird will forever sit near the top. Miller also spoke of a story with Larry Bird and how it impacted him. In a late game situation in Indiana with the game on the line, Larry was at the free-throw line. Reggie attempted to distract Bird during his first free throw. After knocking the shot down, Bird turned and looked at him.

Walking over casually Bird said, "You must be out of your damn mind. This is Indiana ground. I was born and bred here. I'm the legend around here." Fact was, Bird was right. He shows loyalty and appreciation of his Indiana roots by now serving in the Indiana Pacers front office as the President of Basketball Operations. His sole dedication is to now bring a title back to his home state. His greatness is understated and his impact will never be forgotten. This "common man" turned out to be something extraordinary. He showed that no matter the circumstance, you can overcome and be bigger and better. Magic Johnson said it best when he said, "There will never be another Larry Bird."