CAN2
END2 hours ago

The Pittsburgh Pirates had the privilege of hosting the first game of the season on Sunday afternoon against the St. Louis Cardinals. For the Pirates, they start the season 1-0, thanks in large part to starting pitcher Francisco Liriano, as they beat the Cardinals 4-1 in Pittsburgh.

Although it was just 39 degrees when Liriano threw out the first pitch at PNC Park, the sun was shining bright and the fans were excited to kick off the 2016 season with high hopes for Clint Hurdle's Bucs.

Liraino shines on both sides of the ball

Francisco Liriano showed signs of brilliance on Sunday, finishing the game allowing just three hits in six innings of shutout baseball. Liriano also tied a Pirates Opening Day record with 10 punchouts, but struggled with his command at times as he put five men on base via base on balls.

Liriano didn't just shine on the mound, however. The veteran southpaw also drove in the first run of the Major League season. He drove home Gregory Polanco in the second inning with a single with runners at the corners. In what seemed like a sure-fire bunt situation, manager Clint Hurdle gave Liriano the green light, despite being a career .121 hitter.

David Freese, who was the World Series MVP for the St. Louis Cardinals in 2011, had two hits against his former team in his debut with the black and yellow. Catcher Francisco Cervelli and outfielder Gregory Polanco had two hits each as well. Cervelli had the first triple of the season, and both Polanco and Cervelli touched home plate in the season opener. 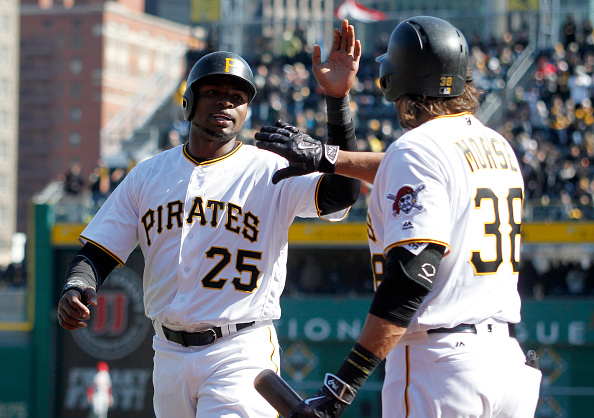 Liriano was brilliant on the mound, and this is what Pirates' fans and teammates know he is capable of.

Adam Wainwright made the start for the Red Birds, marking his first regular season start since suffering a torn Achilles last April. Wainwright acknowledged that he had to shake off some rust, and fix his timing issues, but when he does, the former All-Star will be one of the most dangerous in baseball yet again.

"I certainly got better as I went along," Wainwright said (MLB.com).

Wainwright pitched six innings and gave up three runs on six hits to go with three strikeouts and three walks as well.

"We had guys in scoring position wiith less than two outs more than once and that's something we take a lot of pride in figuring out how to get it done," manager Mike Matheny said (MLB.com). "it just didn't happen today."

2015 All-Star Michael Wacha will toe the rubber on Tuesday against the Pirates, as both teams will have a day off tomorrow. Wacha was 17-7 last year with a 3.38 ERA including a 2-1 record against Pittsburgh last season.

For the Pirates, Jon Niese will make his debut for Pittsburgh. Niese was acquired in the offseason trade that sent second baseman Neil Walker to the Mets. Niese was 9-10 with a 4.13 ERA last season for the Naional League Champion New York Mets.