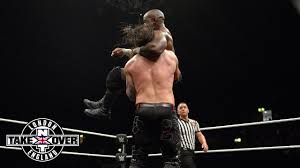 Corbin won with the End of Days Source(Youtube.com)

One of the most highly anticipated matches was that of Baron Corbin - Apollo Crews, as two of NXT's biggest stars finally met to settle their differences, in what was arguably the biggest match of both men's careers in the developmental system.

Whilst is was certainly not a technical match, it delivered exactly what fans had been expecting, a physical brawl with both athletes trading their biggest shots to try and gain the victory, and it was Corbin who walked away with the win.

Not only did the victory give him a win on a Takeover event and push him towards a title match, but he became the first person to pin Crews since he joined WWE, and that is something that Corbin can play on from now on.

The crowd reaction was loud for Corbin as they gave him abuse from start to finish, something he has been getting on a regular basis now, which as a heel character, is exactly what he wants.

It was the biggest victory of his career so far, and it will be interesting to see the direction that Corbin now takes and whether he pushes for a championship shot or continues his feud with Crews, but either way Takeover:London provided him with a huge opportunity to make the step up that he relishes.

NXT crowds are known for being loud and vibrant, as the bulk of the audience is made up of wrestling's most passionate fans, when that is combined with an English crowd, who are known for being one of the loudest crowds in the world, it created a thunderous atmosphere from start to finish.

The fans were invested in every single match and with their unique chants and songs, they created an atmosphere that has never been seen before and it added to the event as a whole and the talent were visibly enjoying it.

Some have argued that the constant singing distracted them for the match, the vast majority of fans seemed to enjoy the different atmosphere and believed it added to the whole event, overall it was just good to see a crowd clearly enjoying the show and wanted to showcase their passion through singing.

Note: The crowds rendition of The Beatles classic, 'Hey Jude' was one of the greatest chants this author has ever heard watching a wrestling event. 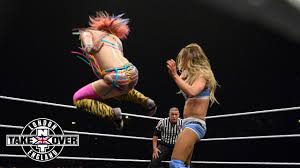 The ladies kicked the show off in style! Source (Youtube.com)

Fans have come to expect nothing short of excellence from the women of NXT as of late, and Takeover:London certainly did not disappoint, fans were treated to two matches, which were both unique and different, yet both captured the audiences attention and continued to grow the women's division all the same.

Asuka's victory over Emma gave fans the fast paced and action packed matches that they have come to know, whilst Bayley's successful title defense against Nia Jax provided a much different type of match, whilst it was slower paced and not as technically sound, they told a superb story from start to finish.

Many had worried going into Takeover that the run of excellent matches for the women would come to an end, but that was not the case, Asuka kicked off the who with an electric match that was one of the best of the night, beating Emma who also displayed a strong showing.

Their match had a great pace and showcased two of the very best female athletes in the company, both women had their time dominating and the use of Dana Brooke was perfect, when it comes to the championship match, the two women told a story that fans bought into perfectley.

Telling the tale of David - Goliath was always going to happen, but the way it was played out was why the title match was another solid match and a big step in Bayley's career, who came out on top, continuing her path to the main roster.

Overall it was another fabulous night for the women of NXT, who continue to develop and push barriers, especially when things for the Diva's revolution are stumbling on the main roster, it is good to see the women steal the show again.

Enzo Amore and Colin Cassady have been two of the most popular and successful teams in NXT ever since they debuted, and every time they have earned a title opportunity they came so close, but have it snatched away from them time and time again.

Takeover:London was another example of Team SAWFT nearly winning the belts, only for them to be ripped away again, and this was a match where the crowd played a huge role as the entire arena were behind the challengers, and the disappointment was truly felt.

The match itself was fantastic and a showcase of tag team wrestling at its very best, with plenty of believable near falls and an exciting finish which saw one of the most devastating Shatter Machines that the champions have ever produced.

It was a brilliant continuation of the characters that Amore and Big Cass have been working on, despite the more focused and determined personalities and aggression in the ring, they still could not get the job done, and it keeps the interest surrounding them.

The anticipation was high for the nights main event, between Finn Balor and Samoa Joe over the NXT Championship, and it did not disappoint, as both men put their bodies on the line in a classic wrestling match that was fast paced and physical throughout.

It was all about who would hit their finisher first as both men tried several times to lock on a successful finish several times, with Joe not being able to ground the champion to effectively use the Coquina Clutch, and Balor struggling to hit his Coup De Grace. 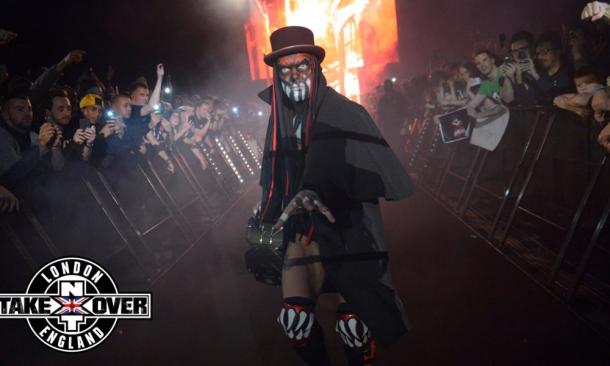 Eventually it would be Balor who retained, hitting his finish to win the match, but the effects were clear as Joe walked away bleeding and the champion was tended to by the doctors, telling the true story of the war they had both been put through.

Balor brought out his demon for the special, dressed as a demonic version of Jack the Ripper, a famous criminal in England. Normally Balor dominates when the demon comes out to play, but Joe was made to look a monster as he gave as good as he got with the demon, which ensured he looked just as strong in defeat as Balor did in victory.

But for the champion, he survived with his championship reign in one piece, and perhaps his greatest test as the face of the brand to date, selling out the Wembley Arena and putting on a match worthy of all the hype.