The majority of the match saw both sides fighting for superiority in the midfield. For the most part, the game seemed to lack a player who looked like they were going to put the ball in the back of the net... then Cameron Lancaster came on.

Cameron Lancaster was a 67th-minute substitute for Luke Spencer. After getting some final instructions from Coach James O'Connor, Cameron Lancaster ran on the field ready to make a difference.

In the 88th-minute, Lancaster gave the Louisville supporters a reason to roar even louder than they had been all match. A quick throw-in from Kyle Smith found the feet of Devon "Speedy" Williams, who pushed the ball forward onto his right foot and then whipped the ball into the box to find the head of Cameron Lancaster. The 25-year-old Englishman rose highest, nodded the ball underneath the crossbar and into the back of the net, and then ran off in celebration before eventually getting swarmed by his teammates. A memorable goal for any USL fan for years to come. An 88th-minute header to win the game, it doesn't get much more dramatic than that.

VAVEL USA: First off, congratulations on becoming a USL Champion. What was it like lifting that trophy in front of over 14,000 fans?

Cameron Lancaster: Cheers, and it was euphoric, it all still feels like a dream! At the time there was a lot of emotion, we had all worked so hard during the season to get to that stage so you can imagine the relief to finally achieve what we set out to do from day one. The fans made the atmosphere incredible too, it was a great occasion for the team and the city as a whole.

VAVEL: You won the game with a fabulous header late in the game. Where does this goal rank in terms of your personal favorites that you’ve scored in your career?

Lancaster: Definitely the best. I've scored some better goals in my opinion but for the occasion and the timing, it has to rank as the best in my career so far.

VAVEL: When you came on to the field as a substitute, did you know you were going to score?

Lancaster: I just went on the pitch trying to make a good impact and to obviously try and score, but after I had a few touches on the ball I did have a feeling I was going to get one, it just all felt like it was set up for me. I didn’t know that was how I was going to score with the header but credit has to go to Speedy Williams for the delivery. The game was crying out for a bit of quality and he provided it.

VAVEL: Finally, this season was a huge success for not only yourself but for the city of Louisville. Can we expect more of this success in the future?

Lancaster: I believe so. The mentality that the manager gives and instills in us, its hard to see this club not being successful. Winning everything we have this season has made the team hungry for more so we will just have to keep our heads in check and keep working hard towards our goals.

The final whistle saw fans from every corner of Louisville Slugger Field storm the field to celebrate with their heroes. The players replaced their purple jerseys in favor of their new white championship shirts and were eventually given the chance to lift the USL Cup. Louisville were victorious in 2017, but the players know they'll have to work hard to hold onto this trophy in 2018. For now, Cameron Lancaster and his teammates will enjoy their victory for a few weeks before preparing for their title defense next season. 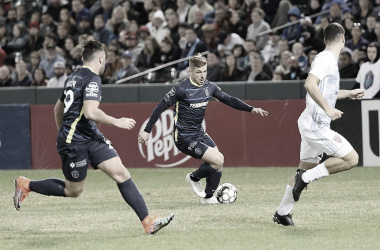