Eugenie Bouchard would take on the qualifier Risa Ozaki in her opening match in Indian Wells. This would be the first meeting between both players and it was clear that Ozaki was not nervous about this match as she went to win the first set, but Bouchard showed her fighting spirit and came back to win in three.

Both players held their first serve games to love, but that good start from the Canadian didn’t last too long after she was broken in the fourth game of the set. Bouchard was serving and was up 40-0, but then went to commit five straight unforced errors handing the first break to the Japanese. After winning her second game, Bouchard started to play better and even had a break opportunity that she threw away with two unforced errors.

The Japanese was one game away from taking the first set and she didn’t hesitate to take it on Bouchard’s serve. The Canadian started getting frustrated as she had to save three set points to stay in the set, she saved two of them, but Bouchard’s seventeenth unforced error gave the opening set to Ozaki.

Before the second set started, Bouchard received some advice from her coach, Thomas Hogstedt. “I don’t know what’s going on,” she said to her coach as what it seemed to be a summary of her performance in the first set. The attitude of the Canadian didn’t seem to be in the best place after speaking to her coach, but she proved to be listening to him as she went on to break in the first game. She was hitting powerful shots, staying behind the baseline and forcing her opponent to run, but especially taking every chance to come to the net and finish the point. Both players held their following serves before exchanging breaks in six games.

It was Ozaki who showed she was hanging tough, breaking Bouchard’s serve after a long game where the Canadian had several opportunities to avoid the break and keep the lead. In the next game, Bouchard punished Ozaki’s slow first serve with a winner return. She only needed one break point to be back on serve and try to win that advantage back. Just like in the last service game, the Canadian had a chance to have a lead but threw it away after handing the break back to the Japanese.

The next two games were also breaks, and it was on Ozaki’s racquet to hold her serve for the first time five games and have a chance to break Bouchard to win the match. However, the Canadian fought to win the break and serve for the set. Bouchard began her service game with an ace and after a few rallies where she played an aggressive tennis she closed the set with her second ace.

Bouchard Back On Top of her Game

Both players held their first serves rather easily just like in the first set, but this time was Bouchard who took the early advantage after hitting a beautiful drop shot followed by a passing shot to win the break. Then the Canadian had to hold a tough game, but she was playing now her best tennis in all the match and not only held her serve, but she went on to break for the second time. Bouchard would hold to be one game away from the second round. Ozaki would hold again in an attempt to come back to the match, but Bouchard was too solid while she served for the match. A long ball by the Japanese handed the win to Eugenie Bouchard who won 2-6, 6-4, 6-2 in two hours. 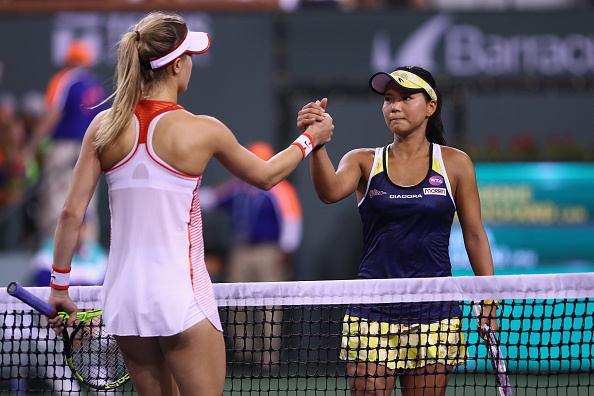 The Canadian started the match with 17 unforced errors in the first set and finished the match with 47 that were compensated with 31 winners. She did two double faults and hit five aces, winning the 61 percent of her first serve. Bouchard also increased her points won at the net where she got eleven out of twenty.

The recent winner in Acapulco will be Bouchard’s next opponent in the second round of the tournament. They have met three times and the American leads their head-to-head 2-1. Their last meeting was in 2013 in Beijing where Stephens won in three sets.