It was another day full of action at the Abierto Mexicano Telcel as Marin Cilic defeated Borna Coric in a tough three-set match. Rafael Nadal easily past Paolo Lorenzi while the blockbuster of the night didn’t disappoint as Novak Djokovic outlasted Juan Martin Del Potro in three tight sets. Find more about what happened during day three in Acapulco.

In the first ATP match on Center Court, the third seed, Marin Cilic took on Borna Coric. The two Croatians met just a few weeks ago in Rotterdam and the encounter was as dramatic and intense as this one in Acapulco. Cilic began the match with a hold to love to lead 1-0. Coric faced problems right from the start as he had to save two break points, but when a third break point arrived the younger Croatian wasn’t able to do the same and the third seed broke to get an early lead. In the fourth game, Cilic created two more chances to break but this time Coric saved both of them. After an exchange of holds, it was Cilic who seemed more solid as he scored another hold to love to lead 5-3. Serving to stay in the set, Coric had to go through a lengthy game of serve as he had to save three set points in order to get a chance to break Cilic in the next game. However, the third seed didn’t waste much time and closed the first set 6-3.

The second set was competitive as Coric began having to save two break points before holding. In the first set, the younger Croatian didn’t have any chance to break Cilic, but he started the second set with three break opportunities, but thanks to his great serve Cilic was able to save them. The first break didn’t come until the fourth game when Coric converted his second break point, and the went on to get a hold to love to lead 4-1. After an exchange of holds, it was now Cilic who had to serve to stay in the set, Coric built two set points, but Cilic erased one with his serve. However, he didn’t manage to do the same with second and handed the set. 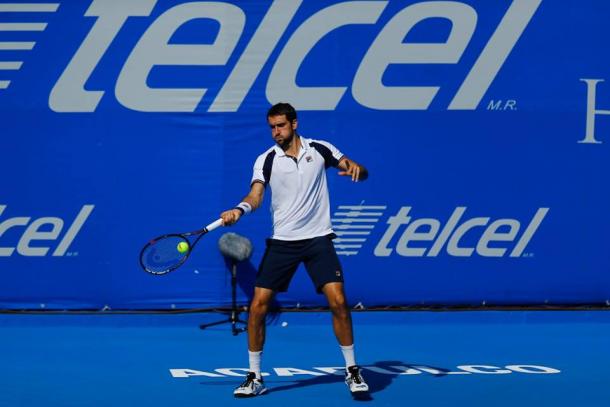 The third set began with both players holding their serves, without facing break points until the seventh game. Coric was serving to go up 4-3, but Marin Cilic spoiled his plans as he got the first break of the set and later to consolidate the break and lead 5-3. The second break of the match came at the best time for the former US Open champion as he only needed one match point to book his spot in the second round. Marin Cilic defeats Borna Coric 6-3, 2-6, 6-3.

After that three set battle from the Croatians, it was time for Rafael Nadal to hit the court as he faced Paolo Lorenzi. Right from the start, the Spaniard was in control of the points and the first break seemed unavoidable. After a hold to love from Nadal, he went on to break in the following game for a 3-1 lead. The second seed consolidated the break with a hold to extend his lead to 4-1. One more break from the Spaniard put him in the comfortable position of serving for the first set and he did, not losing any point on his serve to secure the opener, 6-1.

After the Italian started with a hold, the Spaniard made a statement with a solid hold to love. It was Nadal who struck first as he broke Lorenzi to later confirm the break and extend his lead to 3-1. After the first break, everything went downhill for the Italian who couldn’t keep up with the Spaniard. Nadal went on to break two more times to take the match 6-1, 6-1. 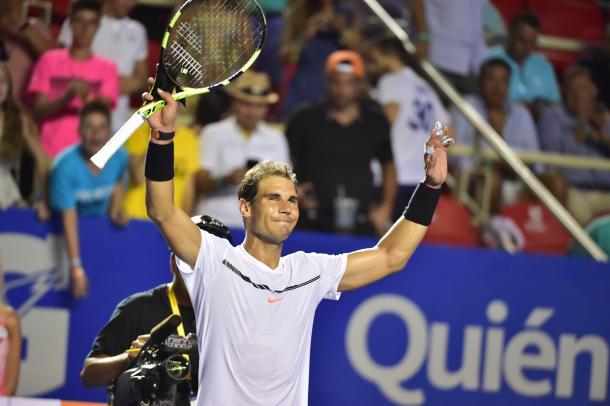 Djokovic comes out victorious after grueling battle against Del Potro

The match of the night was starred by Novak Djokovic and Juan Martín Del Potro. The last time these two met was in the summer of 2016 in Rio at the Olympic Games where the Argentinian defeated the Serbian in the second round. Now in Acapulco, an excited crowd was eager to see great tennis and they weren’t disappointed as both players put on a show. Both players held their serves for the first four game of the set, but it was Djokovic the first one to drop his serve only to recover it one game later to level to 3-3. The ninth game turned out to be crucial for Del Potro as he got a break point opportunity followed a long forehand by Djokovic. The Argentinian completed the break to lead 5-4. Then Del Potro raced to get a 40-0 lead and with that three set points, the Serbian saved one but a wide forehand from the Serbian ended the set 6-4.

The Serbian is known for his comebacks and he wasn’t going to leave without a fight after holds were exchanged the Serbian was forced to save two break points to go up 2-1. Up until this moment, the Argentinian was being more dominant as he had yet to face a break point in this set. However, things didn’t stay that way as it Djokovic the first one to cause harm after breaking Del Potro for a 4-2 lead. In the next game, the Argentinian had a chance to break back but the Serbian saved it to put himself one game away from forcing a decider, but Del Potro was far away from giving up and he went on to break Djokovic while he was serving for the set. In his attempt to level this, Del Potro suffered a second break that caused him to lose the second set, 6-4. 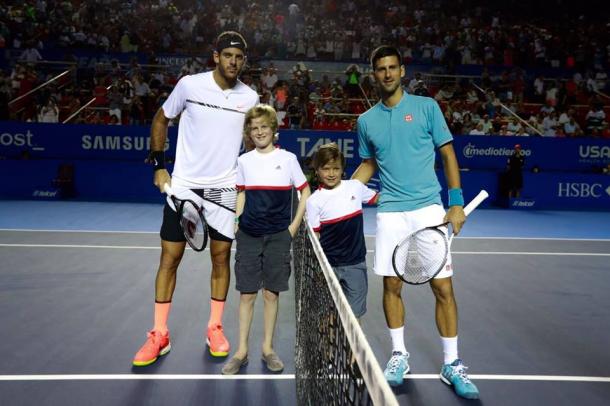 The third set didn’t show a better player as both of them were playing the highest quality of tennis as an excited crowded chanted the names of both players. It wasn’t up until the seventh game when Del Potro created three break points opportunities, the Serbian saved two but wasn’t able to serve the third one. However, the lead didn’t last long as Djokovic went on to break to level to 4-4. After breaking, the top seed played a hold to love to go up 5-4. Now serving to stay in the match, Del Potro erased one match point but it didn’t take long for Djokovic to create a new one. Djokovic hit a smash which Del Potro replied with a long forehand down the line that handed the match to Novak Djokovic. After 2 hours and 39 minutes, Djokovic set up a clash with Nick Kyrgios after defeating Juan Martin Del Potro, 4-6, 6-4, 6-4.

Kyrgios and Thiem are through the quarterfinals, Goffin falls to Querrey, and more action

On Grand Stand, the day began with the fifth seed, David Goffin as he took on Sam Querrey. It was a fantastic start for the American who after breaking the Belgian twice led 4-0. Goffin was able to recover one break, only to lose it again when Querrey took the Belgian’s serve to extend his lead to 5-1. Goffin kept trying to get back into the match, and once again got the break, but Querrey was determinate to get the set and he broke Goffin for the fourth time to grab the first set 6-2. In the second set, both players were more consistent with their serves and they held their serves for seven games. Goffin was forced to save one break point, but an insistent Querrey got the break for a 5-3 lead. The pressure was now on the American who could serve the match with his serve. Being a powerful server, Querrey served out the match with an ace to defeat David Goffin, the fifth seed, 6-2, 6-3.

Defending champion, Dominic Thiem faced Adrian Mannarino. The Austrian started the match breaking the Frenchman, but two games later Mannarino broke Them to love to level to 2-2. In the next game, the Austrian had one chance to recover the lead, but the Frenchman saved it to be up 3-2. Thiem equalized the scoreboard to 3-3 after a solid hold to love. After an exchange of holds, Thiem broke again only to lose the advantage in the following game when Mannarino broke back to take the match to 5-5. However, Mannarino couldn’t keep his serve once again, but this time the Austrian was not going to let this advantage to slip away as he served out the set 7-5. The second set saw fewer breaks as both players kept their serves until the seventh game when Thiem broke for a 4-3 lead. After consolidating the break, the defending champion went on to take the match on his second match points. After 1 hour and 21 minutes, Dominic Thiem defeated Adrian Mannarino 7-5, 6-3. 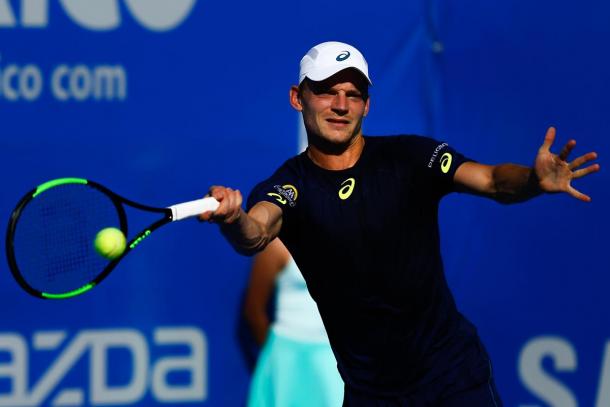 First turn on Court 2, Nick Kyrgios faced Donald Young. The Australian had a great start as he broke the American. Kyrgios who struggled in the previous round was dominating this match. Leading 3-1, Kyrgios found another opportunity to break and extend his lead. Donald Young saved one break point but still had to save two more to stay in the game. However, Kyrgios proved to be too strong and broke a second time to go up 5-1, after he held his serve. The American scored a hold to love, but Kyrgios didn’t struggle to do the same and grab the first set 6-2 after a hold to love. In the second set, the Australian broke first in the third game and that break seemed to be enough for Kyrgios who went on to win the match 6-2, 6-4. Kyrgios only faced two break points in all the match. 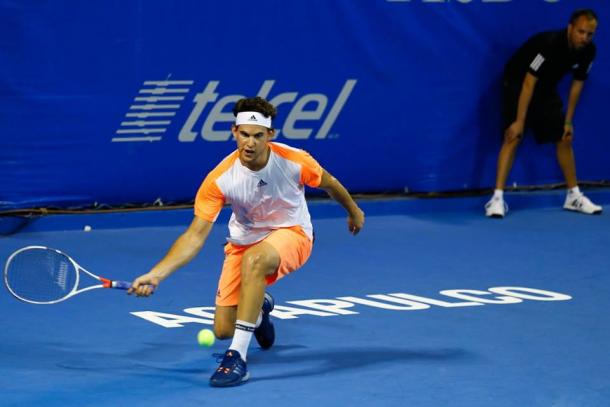 The last two matches featured a thrilling encounter between Yoshihito Nishioka and Jordan Thompson. Both came from pulling an upset, Nishioka defeated Jack Sock in the first round while Thompson outlasted Feliciano Lopez. It was a very close match until the third set when the Japanese dominated the Australian. Straight from the qualifying, Nishioka is into the quarterfinals after defeating Jordan Thompson 6-4, 3-6, 6-0.

In another match, Steve Johnson, who defeated John Isner in the first round, only needed two sets to defeat Ernesto Escobar also from the United States. The first set had to be decided in a tiebreak, while the second one only needed two breaks to take the match. Johnson defeated Escobar 7-6(5), 6-3.

Men will see activity today on the Center Court as Steve Johnson and Marin Cilic will play for a spot in the semifinals. Then Rafael Nadal will be on court to take on Yoshihito Nishioka followed by the defending champion making his 2017 debut on Center Court, Dominic Thiem plays Sam Querrey in a replay of last year’s semifinal. The last match of the day in the main court will be a clash between Novak Djokovic and Nick Kyrgios.

WTA Rome: Victoria Azarenka gets past Venus Williams21 hours ago

US Open: Alexander Zverev vs Dominic Thiem5 days ago

US Open: Victoria Azarenka "looking forward" to final6 days ago