Erhun Oztumer’s career has been far from straightforward. The diminutive Turk has been to hell and back in his quest to join the elite of English football. The 23-year-old is now finding his feet at League One outfit Peterborough with a competitive debut imminent, as a spell on the sidelines comes to a timely end.

After an impressive goalscoring season for Dulwich and Hamlet, the big clubs started calling with Burnley and Luton showing significant interest. After partaking in a trial with the former, this tricky forward decided a move to the Posh would suit him best due to the club’s reputation for developing unknown quantities.

Britt Assombalonga was plucked from Watford's reserves and sold on after a string of fine performances, Dwight Gayle another to be rescued from non-league and Kyle Vassell is now topping the scoring charts after spells with nine non-professional clubs. This is something Oztumer stated was a big factor in his decision to join the ranks in Cambridgeshire.

Speaking to VAVEL he said: “I just thought of their philosophy really, they’ve been known to get players from non-league and move them forward so I thought it was a big step. To work with Darren Ferguson was a big thing for me so that’s what made me chose United.” 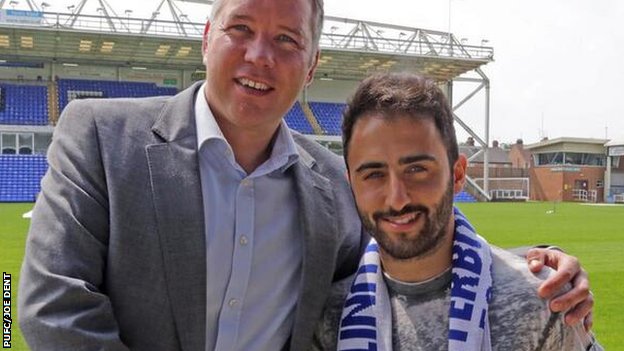 Although he has seen the likes of Dwight Gayle depart to enjoy Premier League football, both feet are firmly on the ground: “That’s the aim [To play at the highest level] but obviously I just want to do well here and help the club. Our aim is to get promoted, hopefully we can get promoted and by doing so teams will look at us and hopefully get a better move perhaps.”

Promotion is very much on the cards for Erhun and his teammates, with United enjoying a very plentiful start to the current campaign. After coming so close to the Championship last term Darren Ferguson’s men are now lying in a lofty third place, despite a loss to Yeovil at the weekend.

This is something those involved can feel around the camp: “The staff, the players, everyone is just buzzing! Everytime I go into training you can see everyone's happy when you’re winning games and you’re top or second in the league so it’s good just to keep winning. Obviously we lost on Saturday but we’re just glad to move on,” he proclaimed in a local hotel, with Manchester City’s draw to Chelsea playing loudly in the background.

Goals from Vassell and Oztumer will be imperative throughout the season with 33 goal striker Assombalonga exiting for Nottingham Forest this summer. Although he was applying his trade in the seventh tier of English football, Oztumer contributed to 51 goals across all competitions in 2013-14. When quizzed about whether he, as a creative player, naturally feels more responsibility to chip in with a few extra goals he said: “Last year I scored 33 goals and obviously I want to carry that on at a higher level and hopefully just give something different to what the team has got. Not just goals, but assists and good performances.”

Despite a short career the determined Oztumer has already experienced an abundance of highs and lows that only exceeds his age. After being released time and time again, he decided to try his luck in Turkey before returning to England with Hamlet. A career defining journey, he says, makes him more appreciative than those who have come through the academy system: “Yeah definitely [I appreciate it more], because of the way I’ve gone from non-league and stuff, it’s like going through the back door really.

Being at Charlton at youth level and getting released was hard to take, then I had to go to Turkey to try my luck because I went on many trials in England and most of them said I was too short so that was disappointing. So I tried my luck in Turkey, was out there for about three or four years and didn’t feel like I was getting anywhere. Obviously I was a pro out there but it just didn’t feel like home to me. I made a big decision, which my parents weren't too happy about, because to leave a pro club to go to non-league is not seen really.

I took the decision by myself, came back and I went to Dulwich and Hamlet. Just from being non-league and not having a lot of money or facilities; to be at Peterborough United now, I appreciate it a lot.”

That decision was a brave one but it was something he insisted he had to do: “I worked hard; I was training once or twice a week, I wasn’t working and the money I was getting wasn’t a lot but I signed up to a gym and I had a personal trainer. I did do the extras and I think that shows today."

A big part of his success was down to the manager at Dulwich, Gavin Rose. The relationship between the two has lasted eight years and doesn’t seem to be ending anytime soon with Oztumer still keeping in contact with his former coach.

“I met Gavin Rose when I was 15 and he had an academy called Aspire Academy, which I joined before I went to Turkey. He’s been great to me, he’s helped me out on and off the pitch and he’s a big reason why I’m here today,” explained Erhun.

"He put me in that shop window, he changed the formation for me to play in that number 10 role so he’s been amazing to me. I’ll always keep in contact with him and hopefully he can take that step up as a manager.” 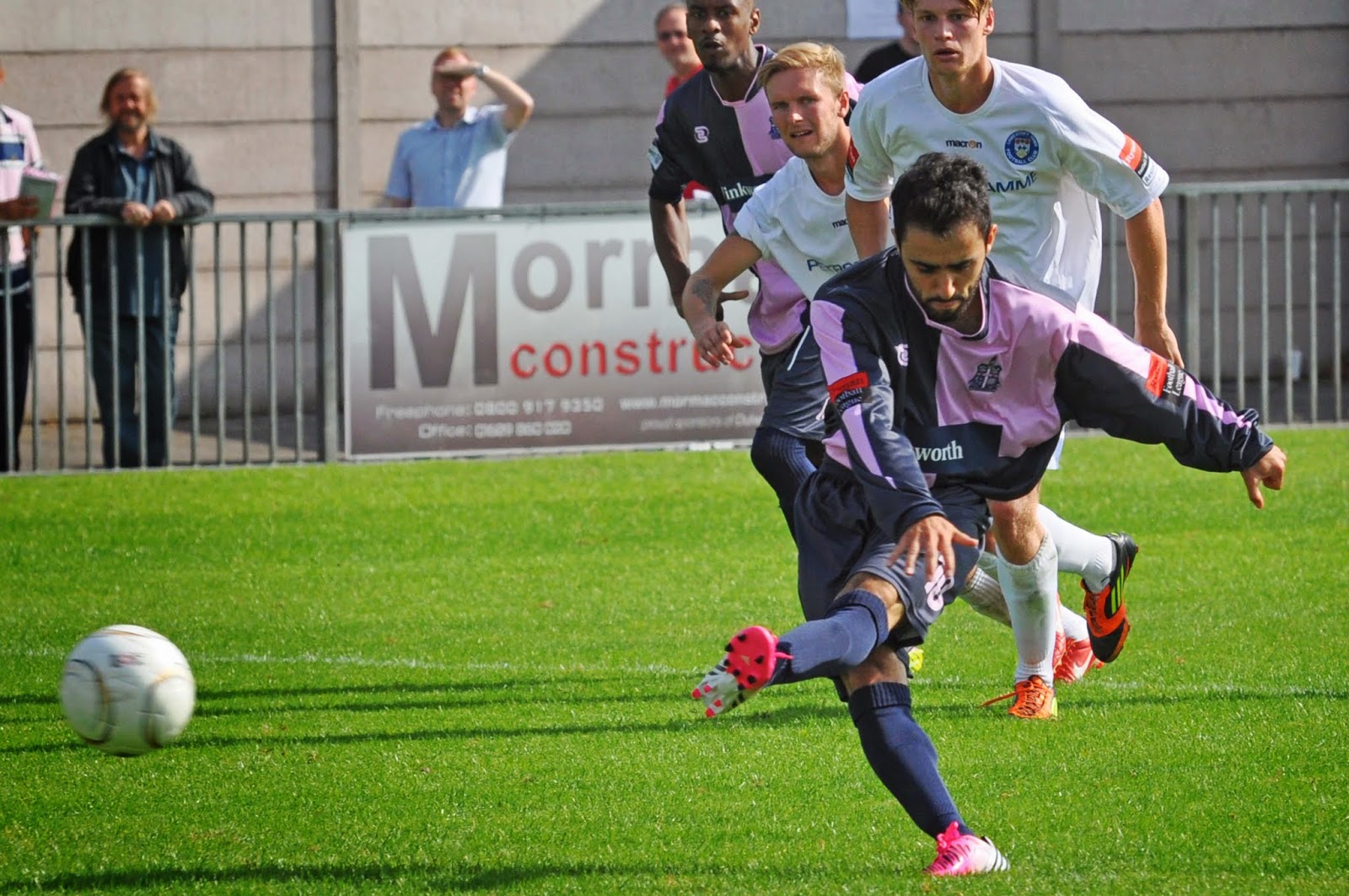 Getting let go because of his height was hard to take, especially at the tender age of 15. When asked whether players in today’s game would be let go for the same reason, he shared: “I’m not sure because the game has changed. I think it has become more technical really but I think maybe if I was brought up in Spain it would have been a different story, but obviously in England it’s a bit different.”

The Spanish national side and Barcelona are prime examples of how the beautiful game has changed and with arguably the best player in the world only standing at 1.69 meters tall, it’s clear to see that height does not hamper ability. With some of the country’s top professionals failing to secure a game for their respective clubs, it’s come as a surprise to many that more haven’t decided to try their luck elsewhere. Something the former Manisaspor man agrees would help develop the players:

“I’m Turkish Cypriot so I did know a little Turkish, but I didn’t know a lot so I needed to adapt. I needed to learn to language and the food was also quite different. Yeah it is a big step but if you can pull it off then you’ve got the English way and the foreign way of playing and I think that will just help you. To play abroad is something everyone should look to do.

It is completely different, I would say the fans are crazy! Before games they would come to the training ground, shout your name before the game, and when you get on the coach they shut the roads. Obviously it’s a good thing all the fans are behind you but when things go bad it’s not as good, there’s a downside to it as well but it’s a great atmosphere.”

Oztumer sustained a groin injury during pre-season and has been ruled out of match action ever since. After such a momentus move, it must be frustrating. A return after half-a-dozen weeks out on the sidelines is approaching ever faster and he could finally make his competitive debut in the coming weeks.

He went on to state: "It’s been disappointing because I think I started pre-season really well, did well and I just got an injury to my groin which put me back six weeks. It’s six weeks on Monday and there’s a game on Tuesday for the U21’s against Watford which I should be playing in. So I should be getting 45 minutes there and hopefully I should be selected for the Saturday game."

Following on from that: "I’m always in the team, with the physio doing my rehab. I’m not isolated, I’m always around the boys and they’re helping me get through it as well so it’s gone quick to be fair."

"I scored a costless-kick against Neots Town and the goal gave me a lot of confidence but I wasn’t playing too well in that game, I was suffering with the injury so I wasn’t 100% fit. I did play in the Barnet game for 45 minutes and I think I did really well there and just taking a step up and doing well in this set up just makes my confidence go higher. So I’m just hoping to get fit and do well in League One."

Brighton & Hove Albion 2-0 Swansea City: Connolly at the double as Seagulls roll into last 16 15 hours ago

Arsenal v AFC Wimbledon, a chance for youth to shine 21 hours ago

The past, the present and the future of Declan Rice 21 hours ago

Manchester United vs West Ham United: Things to look out for a day ago

Manchester United vs West Ham United Preview: How to watch, kick off time, team news, predicted lineups and ones to watch a day ago

The Warm Down: Reds progress to fourth round of Carabao Cup 21 hours ago