Fourth placed Brentford could go within five points of the automatic promotion places with a win against top of the table West Brom on Friday night.

The Baggies boast the best away record in the division by some margin, but have failed to score in their last three EFL Championship matches.

Thomas Frank's Brentford come into the game after an impressive 2-0 victory away at promotion rivals Fulham, whilst  West Brom failed to convert a succession of chances in a 0-0 draw against Birmingham.

Brentford will be boosted by the return of talented winger Bryan Mbeumo, who was ruled out of last week's game against Fulham after testing positive for coronavirus.

Midfielder Emiliano Marcondes is pushing for a start after a game changing cameo in the win against Fulham, coming off the bench to score one and set up another. Long term absentees Karelis Nikolaos and Sergi Canos remain out.

West Brom manager Slaven Bilic says he is 'thinking about his options' with a fully fit group at his disposal, but full-back Nathan Ferguson is likely to have played his last game for The Baggies with his contract due to expire on June 30th. 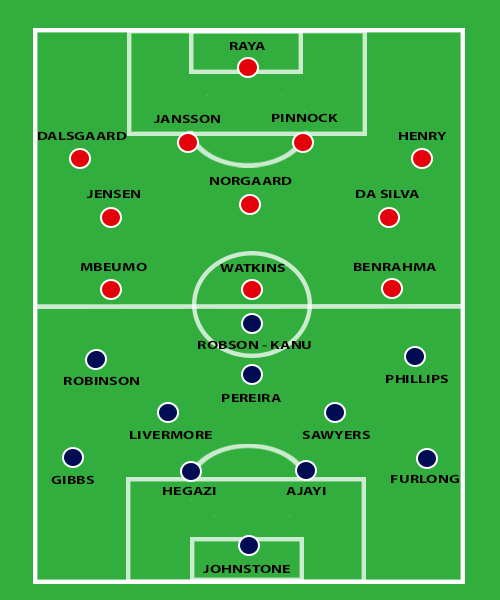 Centre-backs Pontus Jansson and Ethan Pinnock have built a formidable partnership at the heart of The Bees defence, forming the second best defence in league in the process.

But making the headlines are the attacking trio of Mbuemo, Ollie Watkins and Said Benrahma, who will be looking to add to their collective haul of 47 goals this season.

Whilst Brentford have been heavily reliant on their front three, West Brom have six different players who have chipped in with five or more goals.

Attacking midfielder Matheus Pereira has provided the X factor with six goals and a staggering 12 assists, and looks set to move to The Hawthorns on a permanent basis after having a £9m clause triggered this week.

Winger Matt Phillips has terrorised many a full-back over the course of his West Brom career, whilst on the other flank Grady Diangana had a strong start to the season before being ruled out with a hamstring injury in December.

In the middle of the park, Romaine Sawyers has been earning plaudits for his performances and will be pivotal if his team are to pick up a result against his former club Brentford.

The teams last met in December and played out a 1-1 draw, courtesy of goals from Darnell Furlong and Henrik Dalsgaard.

The match will be live on Sky Sports Football from 7pm, with kick-off at 7:45pm, whilst both clubs will also provide coverage via their iFollow channels.

Frank: "We are looking forward to the game. We know we need to win. West Brom have done a good job this season. They are favourites to go up but we will attack, play positive and be brave.

"It's either West Brom and Leeds are in the Premier League or it's game on... we are looking forward to this weekend.”

"This is a real chance for us."@RomaineSawyers looks ahead to a return to Griffin Park on Friday night. Watch his full interview for free over at https://t.co/CZ5IBrM5e0 💬 pic.twitter.com/0iSzq3PHfS

Bilic: "It's a big fixture of course, but then again it's a normal game and we are approaching it in a good state of mind.

"There are two extremely important games and that is our game against Brentford and Leeds game against Fulham. Of course we are concentrating totally on our game... and it's crucial for us to get the result.”

Birmingham City vs Sunderland: Championship Preview, Gameweek 21, 2022 a month ago

Sheffield United vs Rotherham: Championship Preview, Gameweek 20, 2022 a month ago