Since arriving at Hayes Lane in the summer of 2019, Annabel Johnson’s rise at Crystal Palace has been meteoric. She became a stalwart in Dean Davenport's side from the very first minute, establishing herself as the starting right-back and imposing her tenacious mentality on the squad.

Having represented England at Under-19 level on several occasions, and captained Team GB at the World University Games in 2017, Johnson’s natural leadership qualities have become an irreplaceable component of Davenport’s side. Along with her steadfast character, Johnson displayed her exquisite eye for a tackle and all-round footballing genius to pick up Player of the Season in her first year at the club.

Despite the women’s game being curtailed, due to the impact of COVID-19, during lockdown, Johnson was entrusted with the responsibility of club captain, taking over from the departing Freya Holdaway, a role which she describes as being a “huge privilege and a massive honour.”

As club captain, a goal she had set herself from a very young age, she says, “I am 27 now and the role has come along at the perfect time, because even thought I was ambitious enough to want it when I was younger, I realise now why they make you wait a bit longer. You need to be a bit wiser.”

She adds, “When I received the captaincy, Freya had been here for such a long period of time. I respected that a culture change is very difficult to achieve overnight. Therefore, I made the conscious decision of making sure I turned up in pre-season and worked as hard as possible in front of everyone to lead by example. I wanted to earn the respect from the group, because I don’t believe that anyone taking over any role should ever come in tell people what you want them to do. You have to earn that right and recognition from the rest of the squad.” 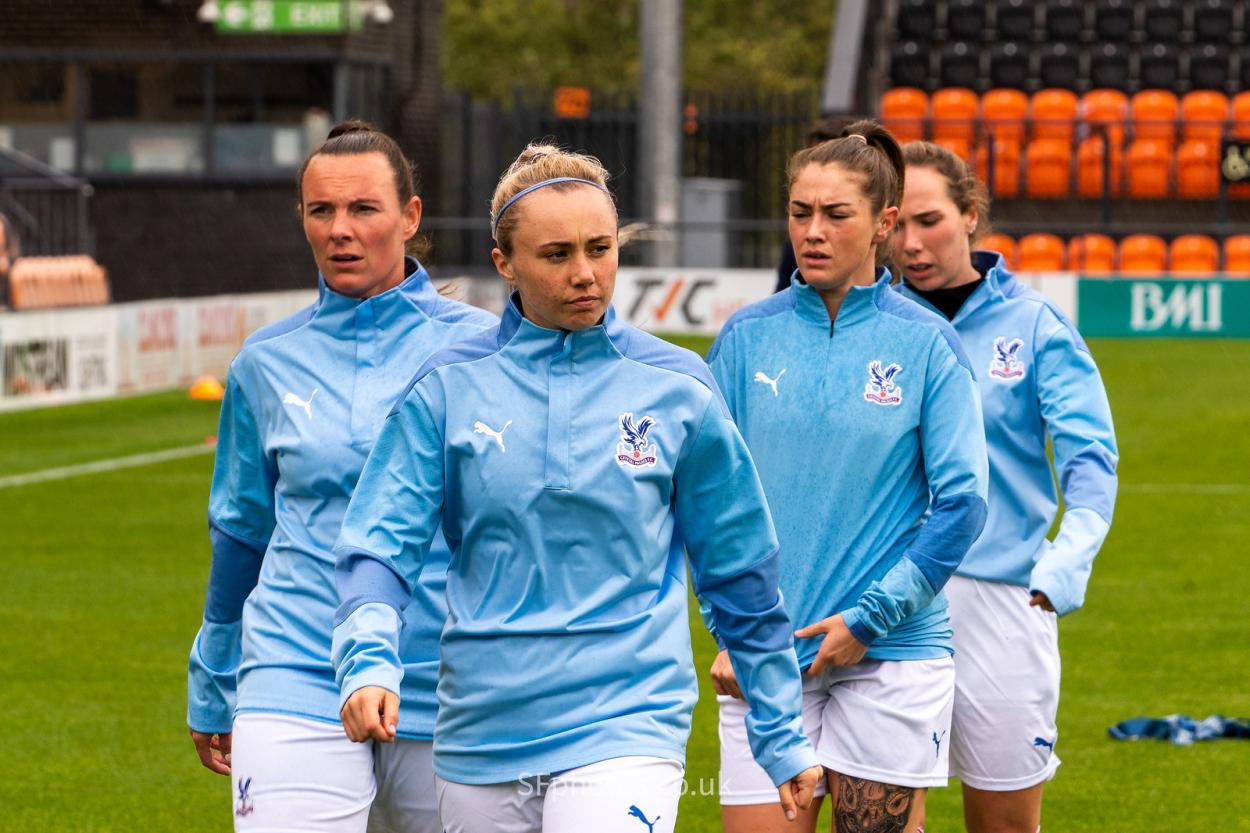 It has been a strong start to the 2020/21 campaign for the south Londoners, who currently find themselves immersed in the Championship mid-table battle, as the club looks to cement itself as a mainstay in the second division.

With Johnson marshalling the defence, assuming a commanding, dependable figure at centre back this season, after only 11 games, the Eagles have recorded their best points’ tally since promotion back to the Championship.

Johnson attributes the good start to the positive atmosphere coursing through the squad. “There is such a determined work ethic amongst the team, and for me, that’s the foundation for us to build on.” She says, “We had a tough start to the season, but I feel as if we have turned a corner. Results wise, we would have liked more points, but performance wise, we are so happy with the direction the club is moving towards; it’s where we want it to be.”

If juggling her footballing responsibilities alongside day-to-day work life in digital marketing was not demanding enough, Johnson has also had to remain a compelling figure for the squad during the chaos caused by the ever-changing situation with the virus. She explains, “We, as a squad of players, have had to be prepared to be adaptable to any situation that may come our way. But luckily, whatever the protocol, we have a fantastic team behind the scenes. They make it as easy as possible for us and I know it takes a lot of work from them, so we are really grateful for that.”

The summer saw a rebuild, with a core group of experienced Women’s Super League signings and a youthful injection creating exciting, free-flowing football, cultivated with the ferocious mentality that Davenport had instilled into his side.

When asked if she can sense a real project forming at the club, Johnson exclaims with pride, “Absolutely! Everything is feeling so connected at the club. The squad harmony is incredible. It starts at the beginning of the week with the training sessions, and the players know why we are working on certain things, and what we want it to result in. The sense of direction has one of the biggest factors, and the club’s ambitions really help us with what we are working towards.” 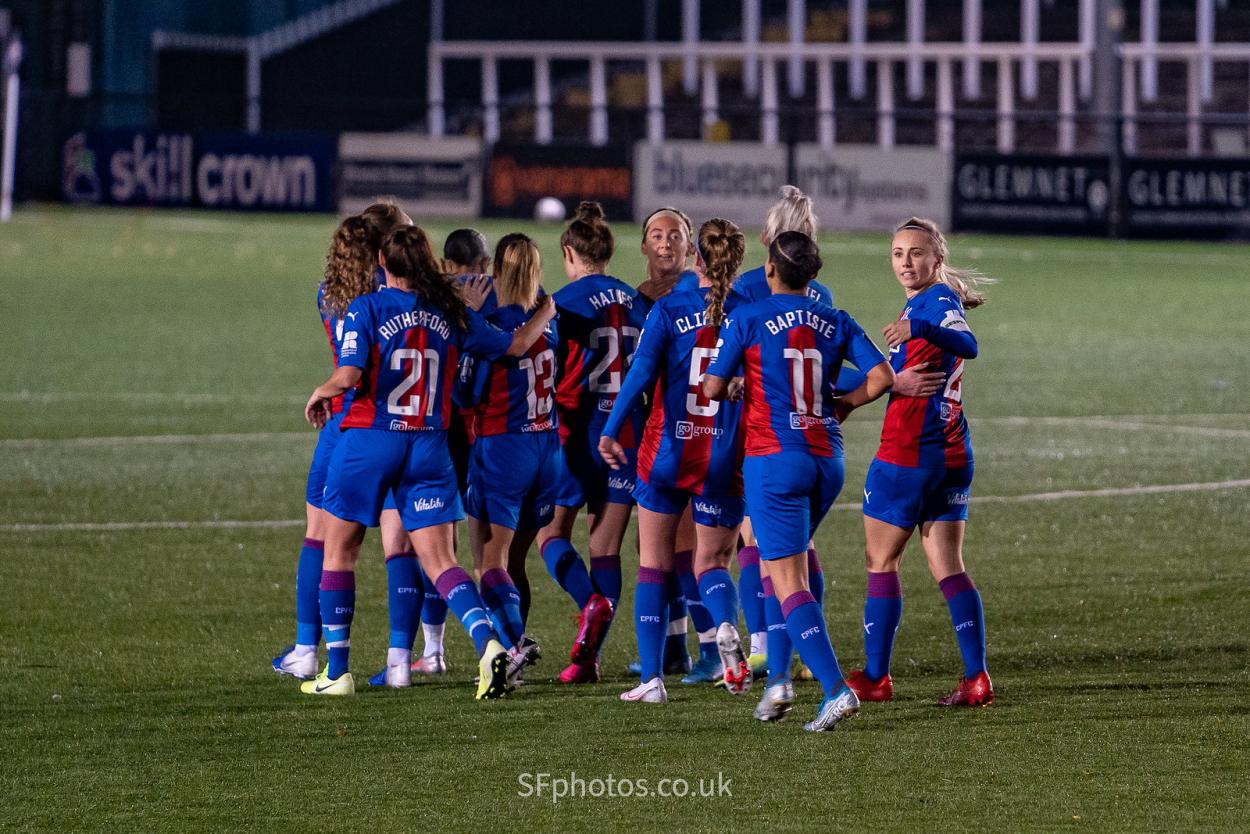 Johnson adds, “It’s my first year being club captain. Everyone who has been a part of our journey already has been fantastic, and everyone who has joined in the summer has had such a massive impact on the club also - whether it’s the confident energy that they have brought to the side, or the excellent performances they have been putting in. I have found the new signings a real help this season.”

One crucial aspect of the early season success has been the relentless, clinical performances of winger, Bianca Baptiste, a player of whom Johnson is quick to sing the praises. Whilst on the bench, rested for an early season cup game, Johnson explains that she watched in awe as the whimsical forward danced her way through the Lewes defence, scoring two in the dying embers of the match to earn Palace all three points in the early stages of The Continental Cup. “She deserves everything.” says Johnson. “I know that she has put in a lot of work in this season, and I couldn’t be happier for her to see it paying off. The opposition fear her now, and she warrants the respect from this league.”

On Thursday night, Annabel Johnson is set to lead her side out against Leicester City, who are currently dominating the Championship and have only lost one game all season. It’s also the club where Johnson started her prestigious career. “I know the chairman and people who work at Leicester. I really respect what they are doing there, but there is no love lost; it was such a long time ago for me. My attention is always fully focused on Palace, and every time we play any club, I am making sure we put the best performance in to get the result.”

Taking a second to analyse her achievements, in the short space of 18 months, the cup quarter-final tie resonates as another monumental accomplishment which echoes the instrumental role Johnson has played in helping the club shake the core of the professional establishment. 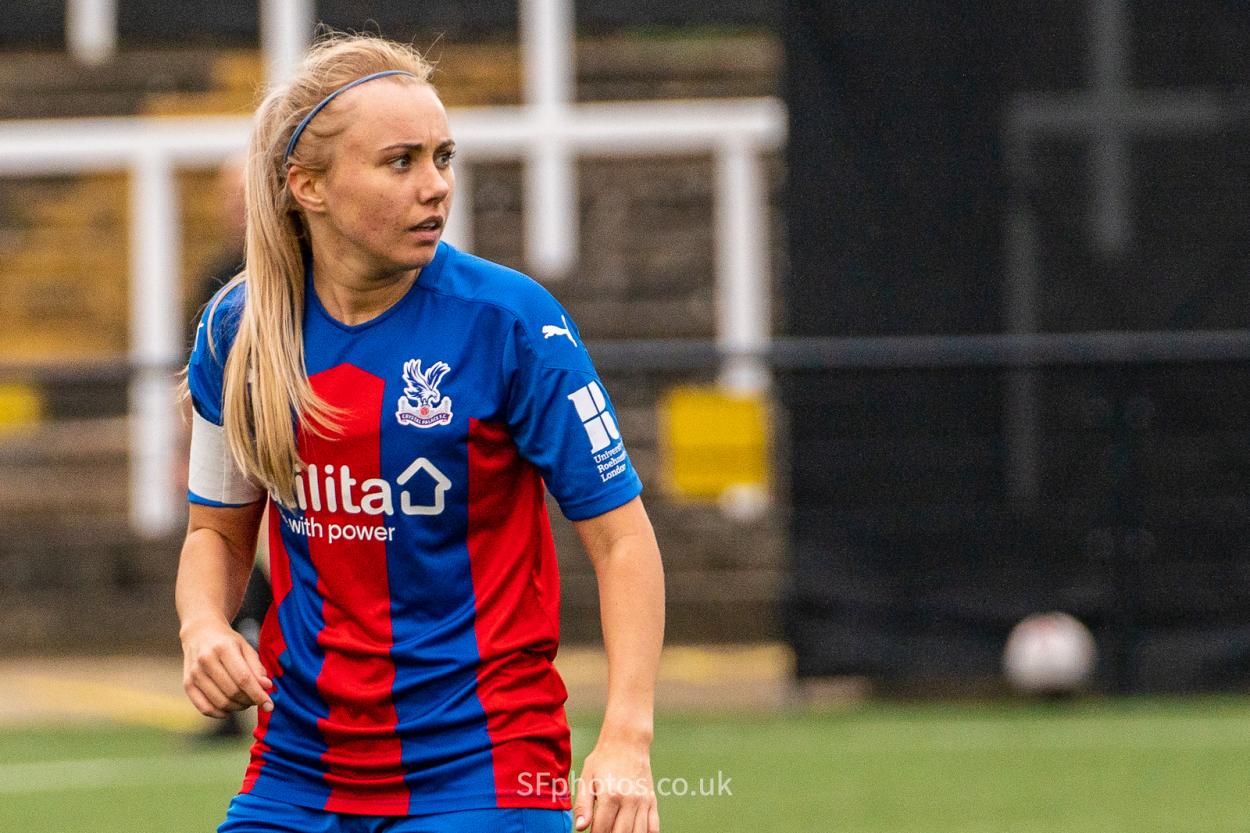 Although not one to focus on personal accolades, she says, “I’m over the moon in what direction the club is moving in. The quarter-finals are such great achievement and I feel as if the club is moving in the right direction. I told the girls, after the 0-0 draw on Sunday against London City, that it was probably my most satisfying performance in a Palace shirt.”

“Dean and I really see eye to eye on trying to feed a resolute work ethic into the side. Having played in this league for quite a while now, I know that to be a successful team, you must have a foundation of being able to win ugly.”

She explains, “Beforehand, when faced with challenges or adversity in games, we may have crumbled under the circumstances. However, on Sunday, we showed the ethos of hard work that we have been trying to embed into the squad. We dug deep, faced up to the challenge and didn’t concede, even though we had to play over 30 minutes with only 10 players on the pitch. I was really proud of the squad and I walked off the pitch very happy.”

The last time Palace faced up to The Foxes, the Eagles capitulated to a 4-1 defeat, after Amy Taylor was sent off prior to half time. But Johnson insists that the squad was galvanised by this defeat, “It was such a big turning point in our season. There was a lot of group analysis and self-reflection after the game, as for us, conceding four goals at home isn't acceptable. It really gave us the kick that we needed. You can have the names and the talent, but the Championship is such a tough league where you need to exceed your limits to get a result. Since then, I can’t fault the girls one bit. I feel as if everyone has really taken their game to the next level.”

Palace qualified for the quarter-final stages as ‘the best of the rest’, finishing runners-up in Group F to WSL side, Bristol City. Palace remain the only semi-professional side left in the competition, finding themselves amongst the illustrious company of Chelsea and Manchester City.

Palace have a squad brimming with confidence, a style of play suited to players that boast the experience and exuberance to take on any opponent on their day. Although very much the underdog amongst the traditional, professional world in the quarter-final draw, Johnson and her side approach this game like any other - fearless, hungry and driven to continue the Eagles’ ascending trajectory.

Christian Benteke vs Odsonne Edouard: Who should start vs Brighton? 19 hours ago

Will Odsonne Edouard provide remedy to Crystal Palace's goalscoring headache? a month ago

Will Hughes: What to expect from Palace's new man in midfield a month ago
//