Oxford United extended their 100% record to eight games, breaking their hoodoo against Fleetwood Town at Grenoble Road on Saturday. It was their first win in 12 previous attempts against the Fishermen.

Josh Ruffels' first-half conversion proved to be the catharsis to Oxford's promotion surge, after Charlie Mulgrew was sent off in the opening minutes, leaving the visitors down to 10 men for the rest of the match.

Karl Robinson's squad move to within three points of the playoffs as their home triumph serves as a statement of intent going forward. Meanwhile, Fleetwood remain in a comfortable 14th spot in League One.

The opening minutes in what was a windy afternoon in the midlands saw Oxford profit from an early lion's share of possession. The midfield zipped a ball past the backline of Fleetwood into the advancing Matty Taylor.

Charlie Mulgrew went hastily in for a tackle on the striker and subsequently got a red card, leaving the Fishermen to 10 men for the rest of the game. Harrison Holgate was brought on to weather Oxford's early storm.

With Fleetwood sitting in a strong defensive block, it was now over to the U's to make a breakthrough. Their first big chance came from the right flank, where Liam Kelly fed James Henry through, inviting him to shoot, but Fleetwood's 'keeper Alex Cairns tipped it on to the crossbar.

Despite good buildup play by Kyle Vassell and Paddy Madden, the defensive duo of Rob Atkinson and Elliott Moore remained resolute as ever, keeping the two attackers for Fleetwood at bay.

The numerical advantage finally came to fruition on the half-hour mark when hometown hero Josh Ruffels converted a James Henry corner, by virtue of Moore's powerful header to keep the attack alive.

James Henry and Cameron Brannagan continued to slide the ball around the midfield at what felt like a million miles an hour, keeping the Fishermen camped in their defensive third.

Though known for his distribution on the front foot; Danny Andrews wasn't given the chance to operate in an offensive role throughout the first half. The left-back couldn't deal with the onslaught of Oxford's right-sided marauding attackers.

Domination in possession tied together with an entourage of setpieces for the Yellows, provided enough for the home side to carry their one-goal lead into halftime.

Obtaining 75% of the first-half possession; Karl Robinson was by far the happier of the two coaches on the 45-minute mark. The job for his squad in the second segment was simple. more of the same.

As the wind continued to howl, Oxford continued to move the ball around comfortably in the opening stages of the second half. Though dangerous in dead-ball situations, Fleetwood remained compact and undeterred in open play.

An early second-half chance went begging for Taylor, as a Sam Long cross was wasted by the number nine. The U's passages of play persisted most fervent down the left side of the Fishermen's defence.

Notwithstanding Oxford's cruise control, the visitors adopted a strategy that gave Oxford less time in midfield to make game-changing decisions. The Yellows continued to probe for a second, but fighting against complacency was the order of the game.

Appeals for a penalty were waved away by the referee in the 57th minute, resulting in a freekick for the visitors, but Oxford were still finding corners as the best form of attack. A scramble in the fence end box wasn't pounced upon.

Finally, on the hour mark, Madden and Fleetwood were capitalising on Oxford's frustration through machiavellian tactics. The Fishermen were finding pockets of space in the attacking third, failing to find anything other than Jack Stevens' gloves in a rare flurry of setpieces.

A murmur of complacency from the substitutes for Oxford, resulted in a glaring miss from Dan Agyei, after failing to reap the rewards of Sam Winnall's shot that trickled off the post. A fiasco of events ended in Agyei lacking the balance to sort his feet out.

Resilient last-ditch defending from the visitors and wayward shooting from the home side became the story of the second half. A game of cat and mouse.

Tension at Grenoble Road started to reach boiling point in the 75th minute, with Agyei being the main perpetrator. Frustration was clear to see from the touchline, leaving Robinson with a difficult decision to make for the remaining minutes.

Fleetwood's strategy changed from safety to risk in the last 10 minutes of the game, peppering the Oxford United box. Though no clear-cut chances were erected, Madden was beginning to pull the strings of the backline.

Simon Wiles' team enjoyed the majority of the last few attempts. It was relief for the U's though, who kept their clean sheet, as the game fizzled out.

Victory for Oxford is a statement of intent

Talking before the fixture, Karl Robinson insisted a win today would aid his squad's promotion bid massively. The process of which the victory was accomplished serves as a statement to the rest of the league.

Finding it difficult to find a way through Fleetwood's compact defence, Oxford's resilience played an instrumental role in allowing Oxford not only the reward of breaking the deadlock but also keeping their lead intact.

Fleetwood can build on their valiant defensive aptitude

The key trait that Fleetwood obtained this afternoon was defensive credibility. The Fishermen kept strong at the back throughout but were restricted by their numerical disadvantage.

However, they can take their defensive performance into the remainder of the season, acknowledging that they possess a tenacious building block in the form of their defence.

Man of the match: James Henry

Oxford United found the most freedom down the right side of attack, where James Henry played a ubiquitous role in the right midfield position.

The former Wolverhampton Wanderers midfielder possessed the key needed to the visitor's defence. It was his corner that cultivated the only goal of the game. 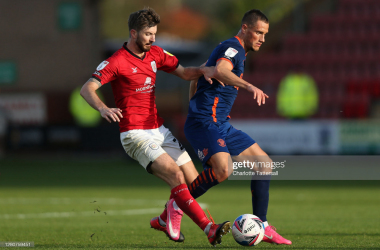 Blackpool vs Crewe Alexandra preview: How to watch, kick-off time, team news, predicted lineups and ones to watch 32 minutes ago

Reading vs Blackburn Rovers preview: Team news, predicted lineups, ones to watch, previous meetings and how to watch&nbsp; 37 minutes ago 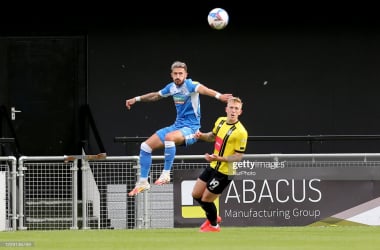 Barrow AFC vs Harrogate Town preview: How to watch, kick-off time, team news, predicted lineups and ones to watch 34 minutes ago

Huddersfield Town vs Birmingham City: Things to look out for 3 hours ago