A goalless draw on Matchday 17 of the Bundesliga between FC Nürnberg and Schalke 04 ensured the Bavarians went into the winter break win less, becoming the first side in the Bundesliga’s prestigious 51 year history to complete a ‘Hinrunde’ (Matchday 1-17) without recording a single victory, leaving Verbeek’s side in severe danger of Bundesliga relegation in 17th position. After a 10th placed finish last campaign, expectations were high at the Grundig Stadion, as supporters highlighted they would like to see the club competing in Europe in the next few years – realistically the UEFA Europa League, which the club competed in, in the 2007/08 season. The club have failed to sustain an influential first team coach since the departure of Dieter Hecking to VfL Wolfsburg in December of 2012. In the wake of poor domestic form early this season, 5 draws and 3 losses, the Nürnberg board decided to part company with Michael Wiesinger, Hecking’s replacement, after the 0-5 home thrashing from Hamburger SV. Dutchman Gertjan Verbeek, former manager of Feyenoord and AZ Alkmaar was the man employed to try and restore domestic stability, something he has failed to achieve. He has garnered just as many points (five) as his predecessor and only a marginally superior goal difference ratio is currently keeping the Dutchman’s win less charges off the foot of the table.

With the current crisis it’s hard to believe that Nürnberg were the first real powerhouse of German football, they boasted a record number of national titles over a 60-year period until being overtaken by Bayern Munich in 1987. They began this season with two 2-2 draws, with 1899 Hoffenheim and newly promoted Hertha Berlin, before suffering back to back Bavarian defeats, going down 2-0 to FC Bayern München at the Allianz Arena. They finished the opening month with another defeat at home to an improved Augsburg side since last campaign. They took similar form from August into Autumn in September, with three consecutive draws on the bounce at the hands of Eintracht Braunschweig, Champions League and Bundesliga runner up Borussia Dortmund and SV Werder Bremen. The BVB 1-1 draw in particular an impressive performance, with Nürnberg showing some promising features to their display in regards to achieving that first victory of the season. Hertha Berlin loanee Pierre-Michel Lasogga’s hat-trick for HSV was the final nail in the coffin for Michael Wiesinger in the 0-5 defeat at the Grundig Stadion.

Nürnberg care taker staff managed to achieve a valuable point at Eintracht Frankfurt for the clubs sixth domestic draw this season whilst the board lined up Wiesinger’s replacement. Gertjan Verbeek came in, and his first game also resulted in a draw, this time at home to VfB Stuttgart. November brought the opportunity for an excitable bottom of the table clash for all Fußball neutrals as fellow Bundesliga strugglers SC Freiburg traveled North East to Bavaria in this six pointer. Freiburg got it all right as they went home with three vital points, Vladimír Darida’s 25-yard screamer the pick of the goals in a 0-3 defeat for Nürnberg. Verbeek’s side then traveled to Borussia Park, home of Mönchengladbach, who had maintained an imperial 100% record there so far this season. They led surprisingly to the delight of the travelling support 0-1 at half-time thanks to a 21st minute strike from Josip Drmic. The scoreline was eventually overturned as Nürnberg went down 3-1 thanks to late goals from Arango, Hermann and a Stark OG.

Nürnberg picked up a worthy point at home to high-flyers VfL Wolfsburg, managed by former Nürnberg head coach Dieter Hecking. Two successive defeats to Bayer 04 and Mainz 05 worsened morale and that quest for the first victory seemed impossible. Hannover 96 were up next at the Grundig Stadion and after leading 3-0 at half-time thanks to goals from Hlousek, Drmic and a crashing header from Nilsson, the Bavarians went in with strong belief and no complacency that Matchday 16, was the one, the one where they would secure their first Bundesliga victory of the season. A spirited Hannover 96 returned to the field, and when substitute Leonardo Bittencourt headed in, his passionate celebration gave you the feeling that even though the home side led 3-1, it was no where near over as the pressure mounted on the vulnerable defense line of Nürnberg. Officiating decisions are something in football that can prove a huge influence on your success or failure, and you have to wonder why the linesman failed to raise his flag when a through ball found a wayward Mame Diouf some two yards offside who made no mistake in finishing the move, and in celebration grabbing the ball – the momentum was with 96 for the remaining 2 minutes plus injury time. Football sometimes is a funny old game, and it was the ex-Manchester United forward Diouf who completed the comeback when he tapped home despite Raphael Schäfer’s notable efforts. Diouf led the passionate celebrations of Hannover 96 who somehow snatched a point from the teeth of the devastated home side, a draw that would feel very much like a defeat.

So after the halfway mark in the season, do I think FC Nürnberg have enough to beat the drop? For me Nürnberg have been significant under achievers in regards to their performances and squad, for example when they hosted Borussia Dortmund in September, there was no such differentiation in quality of the sides, admittedly Dortmund, were not at their best, and have no where near peaked their performances from last season, where they lost out to Bayern Munich twice, finishing runners up in both the Champions League and Bundesliga. Home form is a massive ingredient to success in world football. Take Hull City, of the Barclays Premier League, who sit in a reasonably healthy in 12th, on the road, very poor, however they have made the KC Stadium a fortress in order to avoid the drop zone, and until Sunday’s recent 2-3 defeat to Manchester United, boasted the best home record in the whole of the division. FC Nürnberg need to establish something similar in the next half of the season, they have got big away fixtures already out of the way against Bayern Munich and Bayer and now have to try and take points off of them at home.

The managerial change hasn’t benefited their domestic form either, the change from Wiesinger to Verbeek eight/nine games in is always going to have an effect on the players and the suspect to change is also going to create great adaption in tactics, and maybe in philosophy, who knows, Verbeek is from a different country, Holland, who educate coaches to use total football as their philosophy of football, which maybe something he is trying to install into the ranks at Nürnberg. Players are also failing to perform at their level of capability. The Japanese contingent of Hiroshi Kiyotake and Makoto Hasebe has failed to prove as effective as it was first thought. The performances of signing Josip Drmic have proved positive, the Swiss forward at times staking his claim into booking his place to the World Cup next year with Switzerland, he just needs a consistent partner and more service from the midfield areas. Daniel Ginczek has also shown at times why the club signed him earlier this year, but there’s just not enough goals coming from the front line. In January, Verbeek needs to look to sign defensive players to stop the amount of goals the side have been conceding. Overall, I think FC Nürnberg do have what it takes to maintain their Bundesliga status for next season. The first win is going to be massive for the fans and club, the fans just have to back Verbeek, otherwise it could result in a second managerial casualty for the Bavarians, which we all know doesn’t result in a happy ending, and again will unsettle the players. After all Bundesliga positions can be deceiving, 17th place Nürnberg have only lost one more game this season than fourth placed Borussia Dortmund. 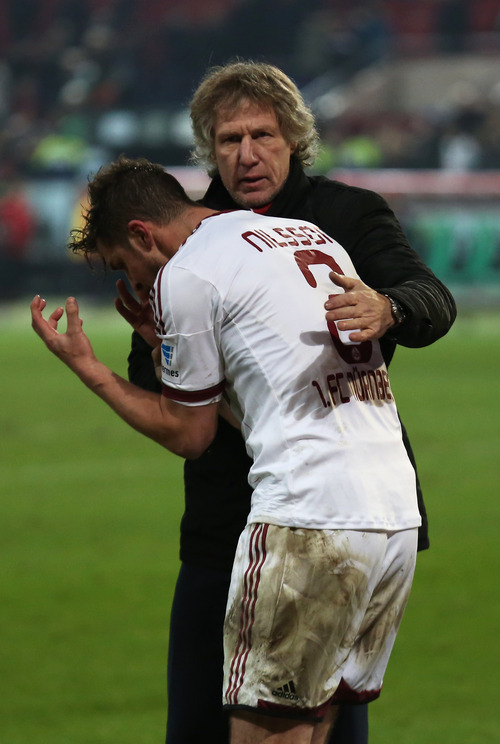 Bundesliga free agents clubs should be targeting a month ago

Borussia Mönchengladbach: State of the squad - June 2022 2 months ago