Whilst the WWE Universe's anticipation for this event is always because of the Royal Rumble itself, the fact that the match goes on for at least an hour means there are generally less matches on the under card, meaning those matches get more ring time, which leads to better quality battles and ultimately a strong special event.

That was the case with this years Rumble, as the WWE decided to only have four matches prior to the night's main event, resulting in every matchup getting plenty of time, allowing the superstars to prove their abilities and they certainly relished the opportunity, with the pace and tempo of the night being set right from the start, with the last man standing match.

Kevin Owens and the eventual winner Dean Ambrose put on a main event worthy match, as the pair continued to show why they are two of the very best in the company, using an array of weapons and high spots to get the crowd on the edge of their seats, but more on those two later in the article.

The three other championship under card matches all kept the crowds interest, with everyone putting on excellent performances. The New Day had the crowd in their hands with Xavier Woods heel manager abilities continuing to grow, and Kalisto surprising fans by regaining the United States Championship, pleasing the Orlando crowd.

Charlotte and Becky Lynch proved that there is life in the Diva's revolution still, as they had a brilliant match that the audience was fully invested in. Despite Lynch failing to pick up the win, due to Ric Flair's interference, she showed that her future is bright, whilst the return of Sasha Banks was welcomed with open arms, as she locked the Bank Statement on the champion, making it clear she's heading for the title.

Brock Lesnar entered the Rumble as one of the favorites to win the match and claim the WWE Championship, and entering as #23 it appeared his chances were even higher as he made his way to ring to quickly begin dominating the match, taking every superstar in sight to suplex city.

The beast clearly had his eye's firmly fixed on the three Wyatt Family members in the ring following the way RAW ended earlier in the week, and the man who main evented last year's WrestleMania managed to eliminate, Luke Harper, Erick Rowan and Braun Strowman, making his feeling's about the family very clear.

His elimination's were perfectly timed as following Strowman's time in the Rumble coming to an end, Bray Wyatt would enter the match, quickly realizing that his plan to have his family help him win the match had failed. The eater of worlds was forced to head into the ring alone, where the former UFC star patiently waited.

However, Wyatt had other plans, as his eliminated family members would re-enter the match and allow the numbers game to take advantage of Lesnar, whilst Paul Heyman screamed to the officials on the outside. Heyman's appeals would be wasted as Lesnar was eliminated by the men he had already thrown out, and subsequently screwed of not only the title but his chance to headline the showcase of immortals.

On the other hand, it now appears the Lesnar's Mania opponent has been made clear, Bray Wyatt. The beast will certainly not take kindly to the actions of the Wyatt Family inside the Rumble, and you can guarantee he will be looking for vengeance at the first possible opportunity. He will likely not get his hands on Wyatt until the biggest night of the year, as Wyatt looks set to be given another major WrestleMania feud.

For weeks now the rumors have been circulating about WWE signing several independent wrestlers, who have been working in New Japan Pro Wrestling. Ever since the news broke fans have been speculating about when they could debut, most of all, the debut of one AJ Styles, and the Royal Rumble match seemed to be the place fans had hoped for.

When the buzzer rang for the third superstar to enter this years Rumble match, fans were met with a theme song they had never heard before, but a face they were very familiar with as the phenomenal one appeared from behind the curtain, and AJ Styles made his official debut in the WWE, creating one of the biggest shocks and surprises in the history of the event.

The reaction was deafening as fans were overjoyed to see the former TNA star finally appear on the biggest stage possible. Styles' appearance didn't disappoint, as he brought his A game, taking it to everyone he could, showing his high flying ability and with the crowd fully behind him, he was one of the best performers inside the Rumble.

His time in the match was brought to an end by Kevin Owens, who welcomed him to the WWE as he tossed him out of the match. But his debut was impressive and he received a brilliant ovation as he made his way to the back, and there is certainly a lot more to come from one of the greatest wrestler's on the planet, who has already created a moment that will never be forgotten.

This years Royal Rumble was full of amazing superstars from top to bottom, who all worked hard to stand out and steal the show, but there was two men particularly who made the biggest impact, proving that they are set for even bigger things this year in WWE.

Both Kevin Owens and Dean Ambrose stood head and shoulders above any other talent Not only did they work two matches, but they made the most of every minute they had, which allowed them to play such significant and key roles on the entire show as a whole.

The feud between both men has elevated each of them and the Intercontinental Championship, as they have been consistently the most entertaining rivalry in the company since their feud began several months ago.

Neither man held back in the last man standing match in what has been an intense feud throughout, with each star going to extreme lengths to make sure it was a match to remember and one worthy of closing the feud.

The battle they had would have stolen the show in it's own right had it not been for the fact one of the year's biggest matches was the main event, but that shows just how entertaining their match was.

Inside the Rumble itself, both men sold their earlier injuries and wounds perfectly, which is always good to see and the fans were clearly happy to see them back in action again, as they came out as two of the most popular wrestler's of the night.

For Owens, he eliminated the debuting Styles, drawing major heat upon himself like all good heels hope to do, and he was the perfect candidate to get rid of the surprise entrant as fans appreciate both men.

He was then involved with another of the night's surprises, as former best friend and NXT star, Sami Zayn made a shock appearance, and the duo picked up from where they left off in NXT, going straight for each other, with Zayn ultimately coming off on top and eliminating Owens from the match.

For Ambrose, he also played a major role in the Rumble match. Entering straight after Owens, the lunatic fringe went directly for the man he beat earlier as they continued to brawl to the fans delight.

But more importantly, Ambrose would go on to be involved in the final two with Triple H, and the fan reaction to the Intercontinental Champion clearly showed his popularity, and that fans are clamoring for him to be pushed to the top, even if HHH got the better of him in the end.

1. The King reclaims his crown

Even though there was many talking points from this years Royal Rumble, the most important one of those was the fact that the WWE has a brand new World Champion, and for the fourteenth time in his career, it's Triple H.

The COO made a surprise return (even though everyone predicted it, including this author, which you can read here) as the number 30 entrant into this years match. He went on to eliminate Roman Reigns, ending his WWE Championship reign, before going on to throw his best friend, Ambrose over the top rope to win.

The Game hadn't been seen since TLC, after the beat down given to him by Reigns. He has patiently waited to get his revenge, and taking the championship away from him is the perfect way of doing so.

Rumors had been running wild (brother) that the planned main event for Mania would be Triple H - Reigns for the title, and it looks like that theory could have been confirmed. Whilst some people are not happy to see a semi-retired Triple H as champion, he is the company's biggest heel and he can still back it up in the ring, and given the injury problems it's the best they could do. 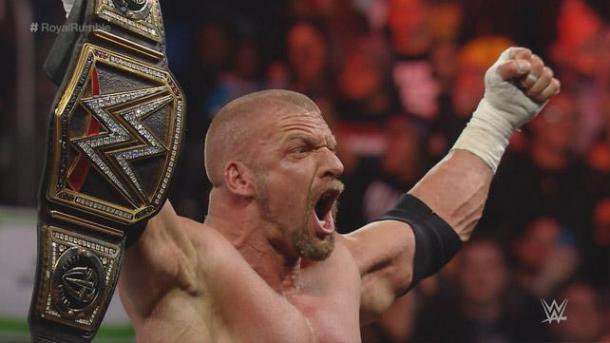