The Brooklyn Nets beat the Cleveland Cavaliers at home Thursday evening, 104 to 95. The Nets, who have advanced to 20 and 15 on the season, maintained a steady lead over the Cavaliers for the majority of the game, and severely outpaced Cleveland in the fourth quarter, holding them to only 12 points. The strength of Brooklyn late allowed them to push past the Cavaliers, who drop to 51 and 21.

The season series is currently in Cleveland’s favor, as they have won two of the three meetings; however, Cleveland has struggled against Brooklyn this season. The Cavaliers won the first two meetings, once in Cleveland and once in Brooklyn, and the struggling Nets managed to pull out a win tonight. The two teams will meet for a final time a week from today, on March 31.

The Nets, who recently released their star player Joe Johnson, have not managed to gain consistent level of play from many of their players throughout the season.  On a night where the second worst team in the East played the top team in the conference, Brooklyn got strong performances from five players who scored double digits. The team was led by former All-Star, Brook Lopez who had 22 points and seven rebounds on the night. Third year guard, Shane Larkin, added 16 points on 70 percent shooting from the field. Reliable young swingman, Bojan Bogdanovic scored 12 points. Brooklyn also got strong bench contributions from newly acquired Sean Kilpatrick and rookie Rondae Hollis-Jefferson, who had 10 points each. Every Nets player who checked in tonight scored. 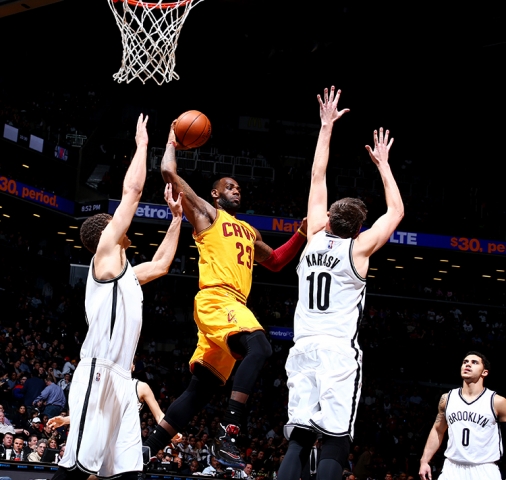 The Cavaliers struggled to find a consistent flow amongst the entire team, as many of the players struggled to score. LeBron James carried much of the scoring load for Cleveland, dropping 30 points off 13 for 16 shooting from the field.  James has improved his play as of late, but the remainder of the team continues to struggle to find consistency. Kyrie Irving, who has been very inconsistent recently, scored 13 points of an abysmal six for 22 shooting from the field, and one for eight from behind the three-point line. Kevin Love also struggled on five for 14 shooting, including zero for 5 from three-point range, scoring 11 points.

Cleveland has been struggling greatly as of late. Although the team sits at the top of the Eastern Conference, two games ahead the second seeded Toronto Raptors, they have failed to find their identity as a team. There has been great levels of inconsistency among all of the players, as injuries and shooting struggles have plagued the team as the playoffs approach. Much controversy has surrounded the team regarding players being unhappy, and this loss will only further the negative environment surrounding the team. It is crucial for the Cavaliers to eliminate controversy and find common ground amongst the players as the playoffs are only a few weeks away.

The Cavaliers will face off against the New York Knicks on Saturday.

The Nets also play on Saturday against the Indiana Pacers.