With the NBA All-Star reserves announced on Tuesday, LeBron James and Stephen Curry will soon draft their All-Star teams and will be announced on Thursday. However, Raj Sawhney and Sully Akbari decided to draft their own teams and simulate the game on NBA 2K18. Raj selected the captain from the Eastern Conference in LeBron James and Sully selected the captain from the Western Conference in Stephen Curry by default and drafted from there.

Here is how the draft went down. Team Raj had the first and Team Sully had the first pick to select from the reserves, just how it will be when James and Curry draft their own teams. The results are below.

Here is how the teams look: 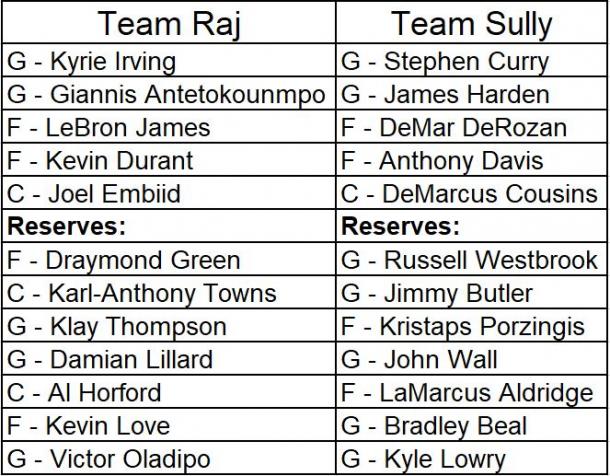 Now, how will these teams perform? Well, luckily for us, NBA 2K can help us with that. We created the teams on NBA 2K18 and simulated it on 'MyLeague' mode. Team Raj had his team on the Cleveland Cavaliers and Team Sully had his on the Golden State Warriors. And no, we did not intend for a Warriors-Cavaliers NBA Finals rematch for the fourth time, we chose those two teams because of the team the respective captains play for.

Team Sully defeated Team Raj by just one point, with the final score being 123-122. Team Sully was down by 15 points at halftime and mounted a big comeback in the second-half. It seems that defense was an emphasis in this game as the score wasn't in the 150's and the fact that it possibly came down to the final possession, which is uncommon in previous All-Star games.

Here is the box score for Team Sully:

(Don't mind Anderson Varejao as we couldn't have teams with less than 12 players).

Here is the box score for Team Raj:

Things looked good for Team Raj as his team was up by 15 at halftime. Unfortunately for his team, they couldn't withstand Team Sully's comeback, allowing for 66 second-half points, which ended up costing them the game. Thompson led the team with 19 points while draining four three-pointers and Antetokounmpo was right behind him with 18 points. Team captain LeBron James seemed to once again had to carry the load, even for his All-Star team! He scored 16 points, grabbed nine rebounds, and dished out eight assists. It was a balanced effort from everyone on Team Raj but it wasn't enough to secure the win.

(Once again, don't mind Deron Williams as we couldn't have teams with less than 12 players).

Hopefully, we can expect a similar game like this for the real All-Star Game in L.A. on February 18, 2018.

The State of the Los Angeles Lakers 3 days ago

How Dangerous Are The New York Knicks? 8 days ago

Holiday Signs Extension With Bucks a month ago

Isaiah Thomas Will Wear No.24 to Honor Kobe Bryant a month ago

Paschall Out 2 Weeks a month ago