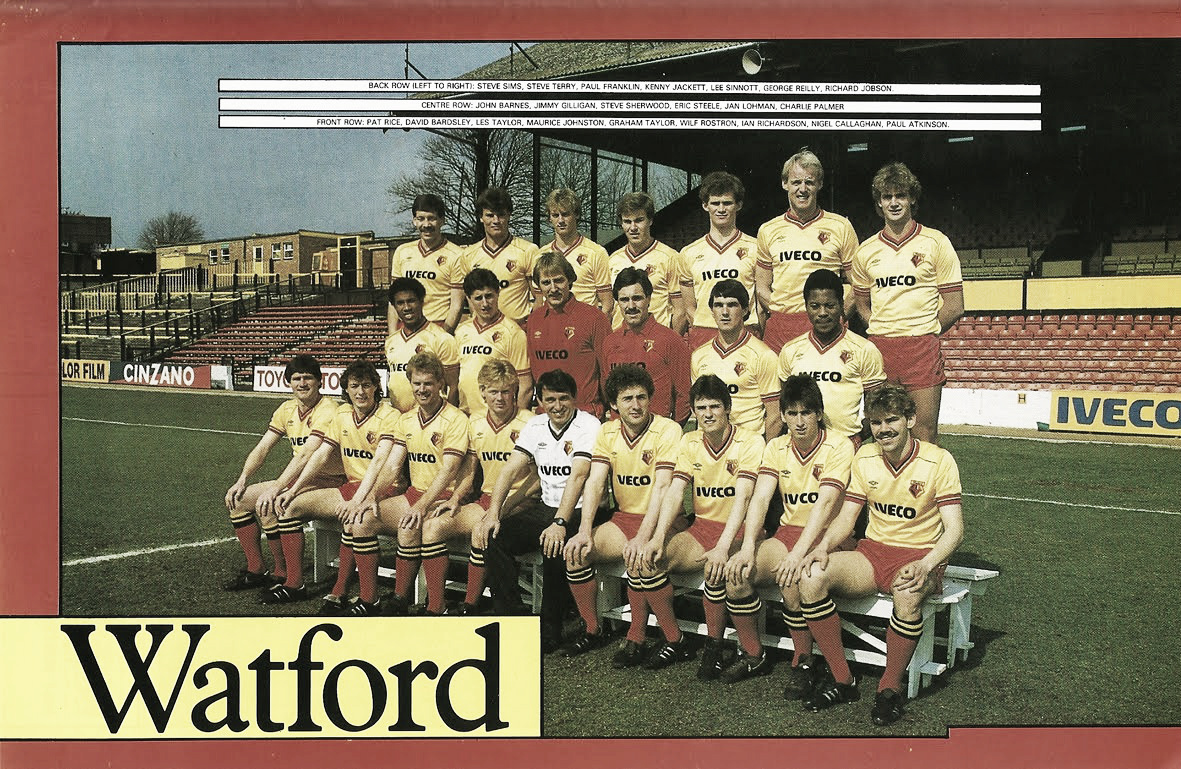 Watford Football Club, formed in 1881 as Watford Rovers, currently compete in the top flight of English football, the Premier League. Nicknamed the Hornets due to their yellow and black home kit, they play their home matches at Vicarage Road in Watford, Hertfordshire.

Watford Rovers were founded in 1881 by Henry Grover. The side initially comprised only amateur players and had no set home ground, making use of various venues across the town. They competed in the FA Cup from the 1886/87 season onwards, but claimed their first silverware in 1889, winning the Herts County Cup.

The club moved to their first designated home ground on Cassio Road when they were integrated into the West Hertfordshire Club and Ground organisation in 1891. They then also proceeded to change their name to West Herts two years later. But this was the inferior club in the town with Watford St Mary's flourishing — on their knees and battling for subsistence, West Herts opted to turn professional, which ultimately led in 1898 to an amalgamation with St Mary's and the creation of the outfit as we know it now: Watford Football Club.

John Goodall became the club's first manager in 1903. He led the team to the Southern League First Division and maintained the status until he departed in 1910. Goodall's successor Harry Kent earned Watford the Southern League crown in the 1914/15 season and, owing to the outbreak of the First World War, the trophy would stay in Hertfordshire until 1919 when football resumed.

However, by 1920 the club would resign from the Southern League and join the brand new Football League. They were inducted into the third tier and remained there until the decade's second sporting suspension at the outbreak of the Second World War, competing from 1922 onwards at Vicarage Road, the club's home to this very day. Following the resumption of football in 1946, Watford competed in the Third Division until 1958 — thanks in no small part to a re-election system which saw each member of the league vote by ballot either to relegate the bottom two or readmit them for another season — but it was in this year the the pyramid was restructured, and the club demoted to the Fourth Division.

Watford soon returned to the third tier, and earned promotion to the Second Division as champions for the first time in their history in 1969. They then reached the club's first FA Cup semi-final in 1970, defeating Stoke City and Liverpool both dwelling in the league above them. But financial difficulty brought an abrupt end to what was the most successful period in the club's history thus far — they were forced to sell a number of their prized assets and relegated from the second tier, eventually dropping back down to the fourth in 1975.

Best known globally for his music, lifelong Watford supporter Elton John became chairman of the club in 1976, declaring that it was his ambition to guide them to the First Division. The appointment of Graham Taylor proved an inspired way to realise said objective — the former Lincoln City manager achieved promotion in his first campaign at the helm, claiming the Fourth Division title as well as setting new records for the league in terms of most wins, fewest defeats, most goals and fewest conceded. From the jaws of obscurity, something quite special was now on the horizon at Vicarage Road.

The Hornets continued to rise up the pyramid, and booked their place in the top tier, John's promised land, for the first time in 1982 — the achievement was soured somewhat by the fact that bitter rivals Luton Town pipped them to the title. A dream start to the 1982/83 season then saw Watford top of the First Division, and in the space of seven years the club had quite literally risen from the foot of England's professional game to the very summit.

Watford would soon be one of the nation's representatives in Europe, with an eventual 2nd-placed finish securing qualification to the UEFA Cup. Unhappy to rest on their already remarkable laurels, the chairman and manager continued to push for silverware — the Hornets came runners-up to Everton in the 1984 FA Cup final, and the image of Taylor leading his squad out Wembley Stadium remains one of the club's most iconic memories.

Taylor departed to take charge of Aston Villa in 1987, and suddenly the upward trajectory was reversed: Watford dropped to the second tier the following season, and to the third in 1996. The great man's influence was undeniable, and his return in that year was welcomed with open arms by all associated with the club. With former midfielder Kenny Jackett serving as his right-hand man, Taylor secured back-to-back promotions to earn the club Premier League status in 1999, winning Division Two (the renamed third tier) before beating Bolton Wanderers in the Division One playoff final.

In the new climate of money, television and global superstars, Watford struggled to compete, even with Taylor at the helm — the Hornets finished bottom of the pile in 1999/2000, and the manager tendered his resignation at the end of the following season. The tenure of his successor, Gianluca Vialli, proved scarcely profitable due to quarrels over the club's wage bill; with neither Taylor nor John exerting direct influence over the club from 2002 — the latter stepped down as chairman to allow the post to be held in a full-time capacity — it was the beginning of more suffering both on and off the pitch.

The club was on the brink of administration amid the 2002/03 season, but mutual wage deferrals and a run to the FA Cup semi-final kept them afloat. In fact, more than that: Aidy Boothroyd became manager in 2005, initially guiding the club to Championship survival before earning a second shot in the Premier League in 2006.

Again, it was an environment in which the Hornets struggled — they were winless until November and triumphed in just give games throughout the whole league campaign, unsurprisingly finishing bottom again. Boothroyd stayed on in the second tier, but left in the middle of the 2008/09 season with the club's position becoming ever more precarious. The helm was inherited by Brendan Rodgers and then Malkay Mckay, but both were lured away by Reading and Cardiff City respectively.

Former defender Sean Dyche was the next man in charge, however it was goings on off the pitch that caught the eye. Laurence Bassini had purchased the club and it would prove the beginning, not the end, of the darkest period of Watford's recent history. The squad performed well enough, finishing 11th in the 2011/12 Championship season, but any success was marred by allegations of financial impropriety on Bassini's behalf — administration threatened the club again, but the Pozzo family stepped in to its rescue.

The purchase of the club by the Pozzo family in 2012 cued sweeping changes at Vicarage Road: Dyche was sacked in July and replaced by the Italian Gianfranco Zola, and the squad was revamped with a multitude of loan signings, many from either of the sister clubs, Udinese or Granada. Watford, an unspectacular team in England's second tier, were now imitating one of Europe's most traditionally successful recruitment models, and that which the Pozzos had used to establish Udinese and Granada in the top flights of their respective countries.

The first season under the Pozzos went well, with the Hornets finishing third. They then navigated a playoff semi-final against Leicester City to book a one-off encounter with Crystal Palace at Wembley for a place in the Premier League, but they were sunk by a penalty from former striker Kevin Phillips. Zola resigned after a difficult start to the 2013/14 campaign, with the team failing to replicate their previous successes — this was the start of the managerial merry-go-round which would see the club, for various reasons, cycle through Giuseppe Sannino, Óscar García and Billy McKinlay before finally settling on Slaviša Jokanović.

With the Serb at the helm and a host of more temporary additions to the squad, Watford thrived. They returned to the top flight after an eight year absence as runners-up in 2015, helped in no small part by skipper Troy Deeney's feat of scoring 20 or more Championship goals for a third season running. However, Jokanović's contract ran out, and he was replaced by the pragmatic Quique Sánchez Flores. It proved an inspired decision, with defensive solidity and goals from Deeney and strike-partner Odion Ighalo propelling the Hornets to comfortable safety for the first time in the Premier League era as well as a FA Cup semi-final; but a worryingly poor end to the campaign saw Sánchez Flores and the Pozzos mutually agree to part ways.

The reigns of Walter Mazzarri and Marco Silva were not quite as prosperous, but Javi Gracia soon emerged as the man with the potential to continue Watford's impressive ascendency. The Spaniard steered the team clear of a relegation dogfight in his first four months in charge and, as the first Watford manager since Sannino to survive an entire summer at the helm, he had the chance to ingrain a footballing philosophy which would pay dividends in the season to come.

In Gracia's first full campaign, Watford led the race for 7th and European qualification up until another disappointing run-in — it nonetheless remains the club's most successful Premier League season ever, with 50 points tallied and an 11th-placed finish secured. But it is the FA Cup that Gracia will be remembered for: the Hornets defeated non-league Woking, Premier League Newcastle United and Crystal Palace as well as Championship Queens Park Rangers on their way to a Wembley clash with Wolverhampton Wanderers, where they came from two goals down to clinch the tie 3-2 in extra time, booking their place in the nation's showpiece fixture for the first time in 35 years. Unfortunately, they were demolished by a rampant and statistically historic Manchester City side in the final, but it still goes down as one of the fondest days in Watford's recent memory, and a mark of how far they have come.

A stuttering start to the 2019/20 season saw Gracia sacked and Sánchez Flores invited to return. The former head coach opted to conclude "unfinished business" at Vicarage Road but also failed to get the team up and running, leading eventually to his departure and the appointment of Nigel Pearson who has since restored a fighting chance of Watford remaining in the top flight for a sixth consecutive year.

Vicarage Road has been the home of Watford since 1922, but the club did not own the ground outright until as late as 2002. It has been developed extensively since, and is now four-sided with a capacity of around 22,200 and the East and West Stands named in honour of Elton John and Graham Taylor respectively. The Vicarage Road Stand hosts the family section and visiting fans, while the Rookery Stand is home to the club's most prominent supporter group, the 1881. The Stadium was shared with Rugby Union side Saracens between 1997 and 2013, and has also hosted England Under-21s matches as well as three fund-raising concerts by John.

Watford's training ground is next door to that of Arsenal in London Colney, Hertfordshire.