After a dismal performance at Old Trafford in the opening game of the Barclays Premier League season, there are some things Manchester United will be forced to regret.

Pre-season brought about much excitement and anticipation for the large United fanbase across the world. Louis van Gaal's seemingly transformed United side defeated every side faced in the three weeks they spent in the United States of America.

To start proceedings off under 'King Louis' Manchester United demolished LA Galaxy 7-1 with two youngsters scoring a brace each. Roma proved no challenge and Inter Milan were eventually succeeded after penalties. Real Madrid were a challenge but one that could be overcome by the high flying reds and Liverpool forced the rejuvenated side to work hard for their win. United won the ever pointless pre-season competition and Wayne Rooney and Darren Fletcher were allowed to sheepishly lift the trophy infront of tens of thousands of admiring Americans.

All the confidence came crashing down as the 13 time Premier League winners opened the biggest league in the World by falling at the hands of Swansea City. A poor first half where Ki gave Swansea the lead seemed to have been altered by van Gaal's version of the hairdryer when United came out looking a new side and Wayne Rooney scored an overhead kick within 8 minutes of the restart. Once more the tidal wave crumbled over Old Trafford when Glyfi Sigurdsson reinstated Swansea's well earned lead with 18 minutes left until Mike Dean blew his whistle for the final time that day. United couldn't respond and the fans who'd filled 75,000 seats simply sighed with embarassment and dismay.

The lunchtime defeat on Saturday can't just be because the players who humiliated themselves last season didn't eat enough pasta pre-game though. Manchester United have to regret the decisions they made to increase revenue during the summer without Champions League football to look froward to. Louis van Gaal will be angered with Edward Woodward's failure to capture his targets. The Arturo Vidal saga has been painful to look for even the most immune United fan. All these things plus more will be a cause for regret as the United faithful feel the nerves creeping into their boots.

Ed Woodward first came to United last summer when David Gill departed at the same time as Sir Alex Ferguson. A ten year servant at the club, Gill was the last high up board member to not come from the Glazer family of have any connection to the Glazers which got him into the job. Woodward was his replacement and instantly, United fans became aware of his lack of footballing knowledge having been an accountant for the Glazers and others previously. The summer of David Moyes consisted of claims of interest in various players before no movement from Woodward. Woodward then paid £3 million more than Marouane Fellaini's release cause on deadline day because the targets that David Moyes set weren't achieved by Woodward. After being seen as a complete failure within weeks of him arriving to Manchester United, Woodward made a better imprssion at the start of this summer's transfer window, signing Luke Shaw and Ander Herrera with no fuss or hassle and quickly, like in the Ferguson days. This was a turn up in the books and no United fan knew what to expect next. 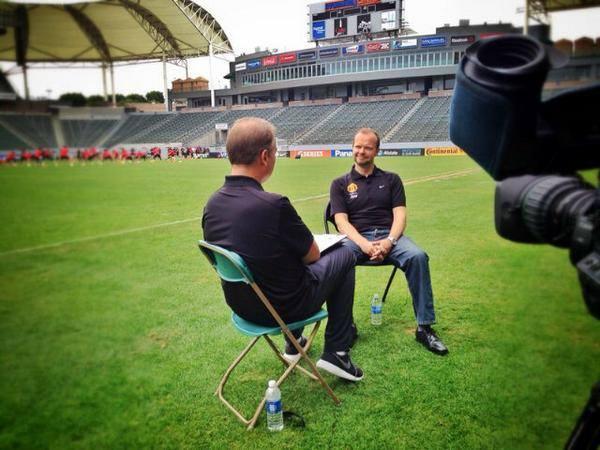 Now, interviewing your own CEO is odd by itself and as Edward Woodward spoke it was clear he did not understand the footballing world and the big mouth that spoke so confidently and cheerily that day has given United a cavern of problems in the transfer window.

"We are willing to invest. There is no fixed budget. Financially we are extremely strong and funds are available. Louis is assessing what’s going on and there is a lot of work going on behind the scenes, so look this space."

Not only has Woodward's big mouth given United fans a huge expectation of things that must be completed, it has given clubs on the selling side the realisation that they can increase their prices to such an extent that United will still pay the price asked for but they will get millions more for their player.

Woodward has failed in many a way this summer despite the two acquisitions made early on in the transfer window. United have been crying out for a clear out for numerous years now and Woodward seems unable to get rid of this deadwood despite the obvious interest that could rise up.

Marouane Fellaini hasn't made an impact since his deadline day arrival last summer and Anderson has been unwanted for several years. Javier Hernandez is out of favour with the new manager and couldn't impress David Moyes last season with the very few chances he was given.

Squad cohesion is always something to be thought about and if the rumours that Louis van Gaal has sent Wilfried Zaha, Nani and Anderson to train away from the first team they must be sold or loaned out as soon as possible.

With all three having large contract bills each week and the Glazers not wanting to spend a penny more than needed the trio and any other unwanted players should be sold or loaned out before the transfer window 'slams shut'.

Louis van Gaal criticised the pre-season tour of the USA in the first leg of travel, in Los Angeles.

"You have to travel distances, you have to fly a lot, you also have jetlag - that is not very positive for a good preparation,"

The Dutchman returned to his accusation of the tour when questioned about Luke Shaw's injury, blaming jetlag as a cause for his injury.

9 first team players were unavailable for the match against Swansea and several of these were due to injuries sustained while in the USA.

The long distances traveled by the United side certainly aren't good preparation and it showed against Swansea with a depleted squad and a somewhat tired performance.

The Summer Saga rears it's ugly head once more

Arturo Vidal is the final horror of the summer. Arturo Vidal has surrounded the back pages in some form since the silly season began regarding the supposed want to sign the Chilean from Manchester United.

Every summer, United cannot seem to avoid partnering the summer up with a saga and Arturo Vidal is the man embroiled in this saga which rolls on and on like a steam train. This reminds everyone so much of Thiago and Cesc Fabregas last year and Wesley Sneidjer in years before.

United's midfield has been significantly improved with the signing of the magnificent Ander Herrera who showed his impressive talents in pre-season, especially against LA Galaxy where he constructed everything. However, the midfield options to partner Herrera currently consists of Darren Fletcher, Michael Carrick, Marouane Fellaini and Tom Cleverley. For a side looking to make it's way back into the top four, these four aren't going to get you there.

United have denied that they have no interest whatsoever in the Chilean international but trusted journalists and Italian media as well as Juventus suggest that there is indeed interest from Louis van Gaal.

Should Vidal not have arrived at Old Trafford by August 31st there will be plentiful disappointed supporters as well as a gaping hole left next to Ander Herrera.

As rumours of Angel Di Maria to Manchester United explode in Spain, Marcos Rojo has signed for van Gaal and more rumours circulate around the future of Daley Blind at Ajax with United as potential suitors, maybe these things won't have to be regretted. Yet should Di Maria escape the grasp of Ed Woodward, and Daley Blind nor any midfielder turn up at the Goods In door of Old Trafford or Carrington training ground, there will be a huge sense of regret all around Old Trafford and an even larger sense of nervousness ahead of a season with a depleted and simply average squad once more. United have made a mess of a summer which could have been so successful with money in the bank and they need a miracle to clean it up.

What does the future hold for Manchester United youngster James Garner? 8 days ago

Mason Greenwood: His England tournament dream won't be happening this summer 2 months ago

Manchester United 2020/21 season review: A frustrating end to a season filled with 'progress'&nbsp; 2 months ago