Stoke City saw off league leaders Manchester City with ease at Saturday lunchtime, a 2-0 win at the Britannia lifting them to seventh in the Premier League table ahead of the 3pm kick-offs.

Stoke got off to a flyer in the game, taking the lead with only seven minutes played as Marko Arnautović finished off Xherdan Shaqiri's cross after the Swiss international had carved open the visitors.

Manchester City didn't learn from this either and were again watching Shaqiri's magic tear them apart in the 15th minute, his perfect through ball picking out his Austrian teammate for his second goal of the day.

Arnautović could have had his hat-trick before the break, but the fact that the woodwork denied him didn't matter in the end, with the two early goals enough to help Stoke bounce back from defeat last time out against Sunderland.

Potters quick off the mark

Despite it being Manchester City on the front foot from the off, dominating possession as the hosts sat deep and defended in numbers, it was Stoke who took the lead after only seven minutes.

Shaqiri's hard work made the goal, the Swiss international taking on three opponents to get to the byeline before Arnautović tapped home.

The wideman left Fernando for dead with his pace before a cute stepover took him past Kolarov and his drilled cut-back beat the sliding challenge of Martin Demichelis. His Austrian teammate then took advantage of some sloppy defending and poor positioning from goalkeeper Joe Hart, which left the net wide open, to fire home with his first touch from close range.

Stoke grew in confidence with this goal and their counter-attacking approach was working a treat, with them doubling their lead inside 15 minutes - Shaqiri and Arnautovic combining once more.

Just a few minutes after Kevin De Bruyne had had a decent chance, albeit one he wasted as his passed effort at goal was saved by Jack Butland, the Swiss went down the other end and produced an even better assist than his first to help the Potters go 2-0 up inside the first quarter of the game.

As Fernando charged at the former Internazionale man to press him on the ball, he turned him inside out and left him on the ground once again before a defence-splitting through ball found the run of Arnautović, who finished first time as he poked his shot past the onrushing Hart.

One would have expected the scoreline after only 15 minutes to wake the visitors up, however it did anything but, with their passing accuracy way off and their creativity more than lacking.

De Bruyne looked to be the man who could drag them back into the game, but he seemed to be the only one capable of as those around him continued to under-perform and lack that sharpness that the Belgian was trying to use to help his team.

They were missing the energy of Sergio Agüero in particular, the Argentine and the Citizens' main man out injured, whilst Wilfried Bony failed to cover himself in glory in a lazy and static opening 45 minutes. 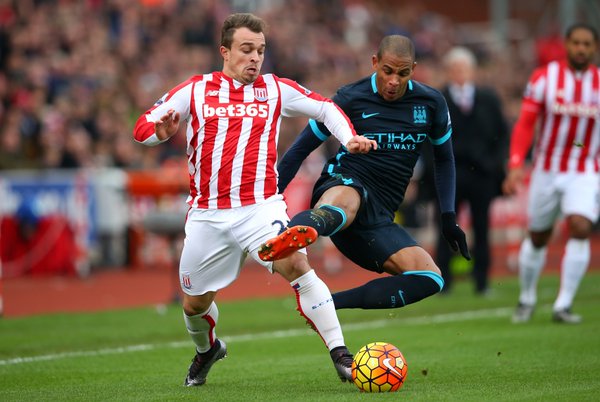 Xherdan Shaqiri was outstanding for Stoke in their 2-0 win over Manchester City. (Photo: talkSPORT)

Kolarov did hit the post just before half time, linking up nicely with Raheem Sterling on the left, but this came in the middle of two chances for Arnautović to get his hat-trick as the visitors' back line continued to simply allow Stoke through.

The first chance saw the Austrian head wide after connecting with Glenn Whelan's pacey ball in from the left, but it was his second chance that was the golden one.

Demichelis and Nicolás Otamendi looked like right and left backs not centre-backs as Arnautović strolled through on goal with all the time in the world to finish, but Hart must be given credit for closing him down and rushing him, the winger slipping at the crucial moment as his effort cannoned back off the upright.

Fortunately for the Citizens, it was just the two goals they trailed by at the interval, though this did not make it any more of a surprise when Manuel Pellegrini sent the same 11 players out in the second half that had been simply out-played in the first.

However, with nothing changing, the manager did make changes before the hour, Fabian Delph and Kelechi Iheanacho coming on for Fernandinho and Bony, before Jesus Navas replaced David Silva.

Nonetheless, none of the substitutes had the desired impact as Stoke continued to look the more likely to score the next goal and they really should have done on 68 minutes after another lovely move.

Bojan was the player pulling out the party tricks this time, his delicate little backheel finding Arnautović's overlapping run and the Austrian just inches away from finding Shaqiri with his low cross, but the Swiss star was unable to get a touch that would have wrapped up the points at 3-0.

Bojan could have made it three just minutes later too, Shaqiri's through ball picking out his run, but the wind just took it away from the Spaniard and he couldn't make the contact necessary to finish as Fernando cleared off the line.

As the Potters started to become more and more of a threat, pursuing a third, things got worse for Manchester City too as Fernando was forced to limp off holding his hamstring and the team had to finish the game with 10, having made all their subs.

From here, their chances of getting something from the game were gone, with Stoke confidently knocking the ball about and taking advantage of that extra man as they comfortably saw the game out.

It was a day to forget for the visitors, who are likely to lose their place at the top of the table as a result, but it was a wonderful performance from the hosts, who were sharper from the off and well deserving of all three points.