Tottenham Hotspur host AS Monaco on Thursday evening, safe in the knowledge that they've already assured their place as one of two Group J qualifiers.

One of the most hotly contested groups

Along with RSC Anderlecht and Qarabag FK, the sides from North London and the French principality go into the final round of fixtures with only Tottenham having confirmed their place in the knockout round of 32.

Having ran out the 1-0 victors against Qarabag in Azerbaijan last time out, thanks to a Harry Kane header, the Premier League side are sitting pretty with ten points at the top of the group, an unassailable gap for third place to bridge.

RSC Anderlecht remain three points behind the two times UEFA Cup winners, knowing only a victory in Brussels against Qarabag will secure their qualification alongside Tottenham.

The challengers at White Hart Lane, AS Monaco, currently sit one place and one point behind Anderlecht in third. The wealthy Ligue 1 side will be hopeful of the three points to potentially seal their own qualification from one of the most competitive groups in Europa League history.

Stephan El Shaarawy scored a late equalizer for Monaco in early October, as they cancelled out Tottenham in a 1-1 draw at the Stade Louis II stadium.

Erik Lamela had given the North Londoners a lead in the 35th minute, following up a saved shop from Dele Alli to tap in the opener.

Despite dominating most of the match, Monaco grew into the contest and scored a deserved leveller in the form of Italian international forward El Shaaraway as Mauricio Pochettino’s side looked set to secure all three points. 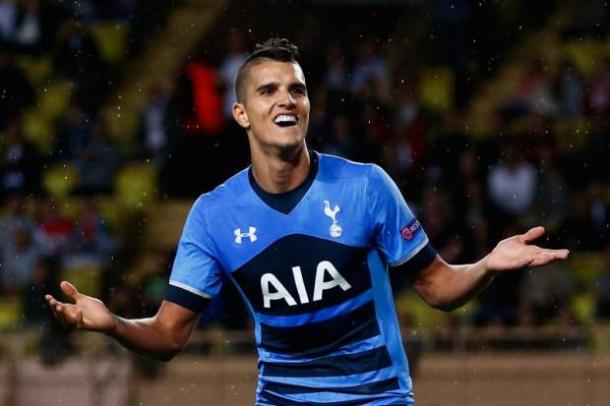 With both sides recognising the importance of the fixture, Tottenham looking for a point which will secure top spot in the group, Pochettino and his counterpart Leonardo Jardim are expected to put out their strongest possible sides.

Tottenham have been boosted in the past few days by the news that both Nacer Chadli and Nabil Bentaleb have returned to training and are now back to full fitness following long term injuries in recent months.

The good news, however, has been cancelled out by Ryan Mason and Mousa Dembélé failing to take part in training this week following a 1-1 draw with West Bromwich Albion on Saturday. The loss of Dembélé, in particular, will be a particular blow to Pochettino with the Belgian international growing with confidence in recent weeks.

An ‘easier’ tie in the next round at stake

Top spot in the group would secure an ‘easier’ tie for Tottenham in the next round of the Europa League, taking place in the new year.

With the third placed teams from the UEFA Champions League falling into the Europa League, ahead of the draw for the next round on Friday (11/12/15), Tottenham will be expecting the points which will see them avoid teams like Shakhtar Donetsk, Galatasaray and holders Sevilla in the coming months.

Is Carlos Vinicius the perfect back-up to Harry Kane? 8 days ago

From Munich to Tottenham: Pierre-Emile Hojbjerg&nbsp; 11 days ago