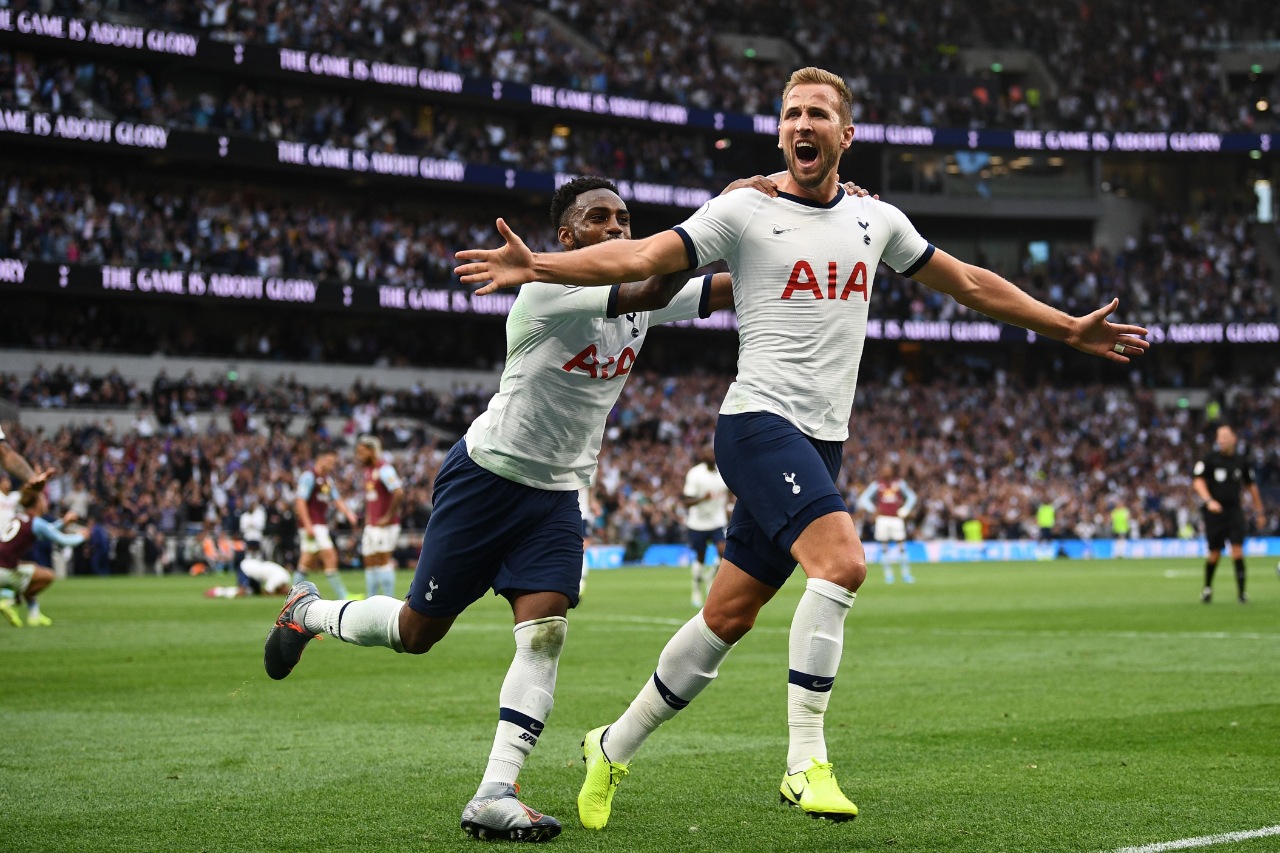 Tottenham Hotspur FC, also known as Spurs, are one of the most successful and reputable English clubs in history. The team is managed by the highly respected Jose Mourinho and they play their home matches at the brand new 'Tottenham Hotspur Stadium' a stadium being described by many as the best in the world. They are based in the heart of Tottenham, located in the Haringey Borough in North London In the 2018-19 season, Spurs finished in 4th place in the English Premier League, ahead of arch-rivals Arsenal, while also reaching their first-ever Champions League Final - which they lost 2-0 to Liverpool in the Wanda Metropolitano Stadium, Madrid, Spain.

Tottenham was founded in 1882 and was originally named 'Hotspur Football Club' by founding member Bobby Buckle, who led a group of schoolboys into the club who he played cricket with for the cricket team 'Hotspur Cricket Club.' In 1884, the club was renamed to 'Tottenham Hotspur Football Club' after postmen were confusing the club for another team of the same name elsewhere in London.

After spending three years playing local pub teams and local teams in friendlies, Tottenham played their first competitive match against a team called St Albans - and won 5-2. From there on, Tottenham continued to play competitive fixtures in cups, before joining the Southern Alliance League in 1892.

The club made history in 1901 by becoming the first non-league team, and to this day the only non-league team ever, to win the FA Cup, by beating Sheffield United 3-1 in a replay - despite being down 1-0 at half time. Seven years later in 1908, the club joined the Football League for the first time, winning promotion from the Second Division into the First Division in the same season.

Due to the First World War, Tottenham were relegated into the Second Division for the first season back since the war ended, however, they won promotion back to the top tier as champions in the 1919-20 season.

In the next 30 years, Spurs would win just one FA Cup which came in 1921, however, they spent most of their time in the Second Division after being relegated. The tides turned though when former Spurs player and tactical genius Arthur Rowe took charge in 1949. He implemented the first recognized possession-based tactic known as 'pass and go' which at the time blew people's minds in the footballing world - before blowing teams away on the pitch. Spurs won the Second Division in the 1949-50 season and then won the First Division in the following season. Rowe taught and educated legendary football manager Vic Buckingham, who took on board Rowe's philosophy and developed it at Barcelona and Ajax into 'Total Football' - the world-famous tactical philosophy which players like Johan Cruyff thrived under.

Back home in England, another one of Rowe's mentorees, Bill Nicholson, took charge of Tottenham in October 1958. Nicholson would become Tottenham's most successful manager and a legendary figure at the club, a legacy that still remains intact today. The manager, who also made 314 appearances for the club and one for England in his playing days, would go on to sign legendary Football figures Dave Mackay, Martin Chivers and Jimmy Greaves before leading his side to the first double (First Division title and FA Cup) of the 20th century by any club in 1961, an FA Cup in 1962 and then becoming the first British team to win a European trophy by beating Atletico Madrid in the Final of the European Cup Winners Cup, 5-1.

Nicholson won an additional FA Cup in 1967 before winning two league cups, in 1971 and 1973. Spurs also became the first team in Britain to win two different European trophies by winning the 1972 UEFA Cup.

Keith Burkinshaw soon became manager after Nicholson resigned, and the new man in charge brought drastic change to the Spurs squad by signing the likes of Ricky Villa and Ossie Ardiles - a milestone for English football as foreign players especially from different continents was something of a rarity. Youth academy product Glenn Hoddle was quickly becoming one of England's talismans, while players like Chris Waddle, Chris Hughton, Pat Jennings and Gary Mabbutt made Tottenham a very attractive team to watch in the late 70s and early 80s. Burkinshaw went on to win the FA Cup in 1981 and 1982 and the UEFA Cup in 1984. The 1981 FA Cup Final replay saw one of Ricky Villa's goals voted as the 20th century's best FA Cup goal - a fantastic solo effort.

After Burkinshaw's departure, Terry Venables took over in 1987 and signed the likes of Gary Lineker, Paul Gascoigne and the late Justin Edinburgh. Venables was supported by new owner Alan Sugar just a month after Tottenham won the 1991 FA Cup Final - making them the first club to win eight FA Cups.

In 1992, the Premier League was formed. Since the first season in the Premier League, Spurs have only won two League Cups, one in 1999 and one in 2008. Despite having the likes of David Ginola, Teddy Sheringham, Jurgen Klinsmann, Darren Anderton and Les Ferdinand in the 90's, the club failed to compete above mid-table in the league. In the 00's, the club had players like Robbie Keane, Dimitar Berbatov, Ledley King and Edgar Davids, but again failed to break into the top 4. In 2006, Spurs controversially missed out on Champions League Football on the final day of the season after a 2-1 loss to rivals West Ham. The Spurs side was missing a number of key players due to illness - as well as starting players who were quite visibly not well enough to play too. This was believed to be a result of the players eating at a restaurant in Canary Wharf and getting food poisoning. New owner Daniel Levy's appeal to replay the game was rejected and Spurs had to settle with Uefa Cup the following year.

Tottenham did qualify for their first Champions League spot in the 2009-2010 season under Harry Redknapp - who took a team that were sitting in 20th place in October 2008, to the top competition in Europe. The following campaign saw the rise of key players like Gareth Bale, Luka Modric and Rafael van der Vaart, who all contributed a hefty amount in helping Tottenham to reaching the Quarter Finals of the Champions League - eventually being knocked out by Real Madrid.

In the Summer of 2012, Harry Redknapp departed Spurs, along with star midfielder Luka Modric who signed for Real Madrid for a whopping £40 million. Mousa Dembele signed from Fulham, joined by the signings of Hugo Lloris, Jan Vertonghen and Clint Dempsey. Andre Villas Boas took charge after being sacked by Chelsea not long before. Bale took the league by storm that season, nearly single-handedly carrying Tottenham up the table, but was unable to help them to a Champions League finish. Bale departed to join former teammate Modric at Real Madrid for a (at the time) world record £85 million. In came the class of 2013, a group of seven players expected to transform Spurs into a title-challenging side. That group included Erik Lamela and Christian Eriksen. However, that project failed and Spurs had a mediocre season after Tim Sherwood took over from Andre Villas Boas. One bright takeaway from the season: the emergence of young star Harry Kane.

In the Summer of 2014, Mauricio Pochettino was appointed Head Coach. The Argentine brought in the likes of Ben Davies from Swansea, Eric Dier from Sporting Lisbon and Federico Fazio from Sevilla. The former Southampton manager had gained a reputation for bringing through youth players and playing a high tempo 'Gegenpress' like system.

The following year, Dele Alli signed for Spurs from MK Dons for a mere £6 million. He was joined by Toby Alderweireld who joined from Atletico Madrid and Heung-Min Son from Bayer Leverkusen. That year, they took eventual winners Leicester to the wire, but a poor run at the end of the season dashed the teams' hopes of winning their first Premier League, with a similar story concurring the next season. Harry Kane, however, continued to break records, winning the Golden Boot in both seasons as well as winning the 2018 World Cup Golden Boot and scoring the most goals in the 2017 calendar year in Europe.

The 2018-19 season saw Spurs get into their first-ever Champions League Final, following a couple of iconic ties in the knockout rounds. The first came in the Quarter Final Second Leg which was against Manchester City. Tottenham, without Kane, needed a draw or a win or to keep within one goal of City if they scored more than two, to ensure they go through. A controversial goal from Fernando Llorente made the game 4-3 to City, with Spurs going through on aggregate away goals with the tie at 4-4. In the final minute, Sergio Aguero cut inside and set up Sterling who finished dramatically, queueing crazy celebrations from the home fans - only for VAR to rule the goal out for offside seeing Spurs through. The second came in the Semi-Final Second Leg against Ajax. Spurs trailed 1-0 and were away from home in the second leg and then trailed 2-0 at half time. Despite seeming down and out, Lucas Moura netted a second-half hat-trick, with his final coming in the 96th minute, to send Spurs into the final. The game will go down as Spurs' most iconic of the 21st century at least.

In Summer 2019, Spurs broke their transfer record to sign Tanguy Ndombele from Lyon for £55 million.

In November 2019, Jose Mourinho was appointed Head Coach after Mauricio Pochettino was sacked.

Plans to build a new stadium were initially proposed in 2008 and then building began in 2017.

The Tottenham Hotspur Stadium officially opened on the 3rd April 2019 after the demolition of the old White Hart Lane to make way for the Stadium. It is situated on Tottenham High Road and can be seen from more than a mile away.

The ground has a capacity of 62,323 and features the world's first retractable football pitch, which has a synthetic turf pitch underneath for NFL London Games, concerts and other events such as Boxing with Anthony Joshua set to fight Kubrat Pulev there sometime in the future.

The Stadium's name is temporary, with the club open to selling the rights to name the stadium to a suitable bidder.

The Stadium has been described as the best in the world by many players, NFL players and coaches, celebrities and more.