Odion Ighalo's early goal consigned Sunderland to a disappointing home defeat, as they were beaten 1-0 by Watford in torrential conditions at the Stadium of Light.

Hornets get off to a flyer

The Hornets got off a much quicker start and dominated the opening period, scoring after just four minutes through Ighalo. Alan Nyom surged behind the Sunderland defence down the right hand side and put the ball across goal, which Ighalo was sharp enough to prod home into the net.

Ighalo's effort didn't give Sam Allardyce's men the wake up call that they may have hoped for, as Watford took advantage of their confident start and went forward in search of a second goal. Patrick van Aanholt made an excellent block to deny Almen Abdi from doubling the lead, before Ighalo and Manuel Jurardo both came close to making it 2-0, in a bizzarre attacking move.

The striker had completely outfoxed John O'Shea, but saw his shot first saved by Costel Pantilimon before Sebastian Coates cleared off the line, only as far as Jurardo who thundered an effort off the bar and out for a goal kick.

There was a slight response from the Black Cats after that, as Fabio Borini had their first meaningful chance of the game, one that was missed. Beating his man to get through on goal down the right hand side, the Italian could only drag his shot wide of the goal. It wasn't enough to impress Allardyce, who made a tactical change after only 20 minutes, bringing on Jack Rodwell for DeAndre Yedlin, switching from a five man defence to four.

Whilst the change didn't alter Sunderland's fortunes hugely, it did stem the flow of Watford's attacks, with tame long range efforts from Etienne Capoue and Rodwell being the remaining first half highlights.

Black Cats improve in second half

Things did improve for Sunderland as the game entered the second 45, with the hosts going slightly more direct in their approach, and causing Watford more problems as a result.

Rodwell had a stinging weak footed effort well saved by Gomes after good work from Steven Fletcher to set him up, whilst van Aanholt saw an effort sail wide before the hour mark, as Allardyce brought on Adam Johnson for Borini.

The winger wasn't exactly making what you'd call a desired impact, and Duncan Watmore was enduring a frustrating afternoon, with things just not falling nicely for the telented youngster. 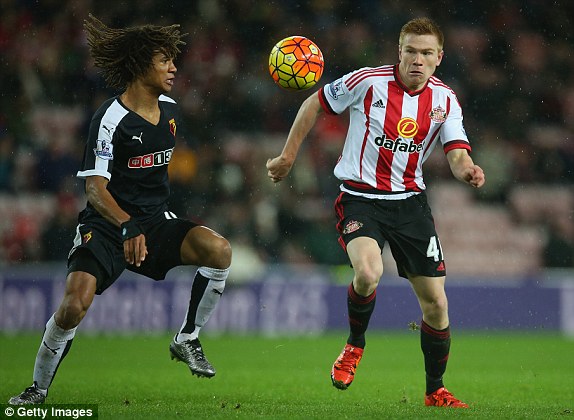 Jermain Defoe was eventually thrown on, and the substitution almost payed off brilliantly, as the frontman put the ball in the net - only to see it ruled out. Watmore's ball through was perfect for Defoe, who made no mistake in scoring, only to see the linesman's flag go up for a correctly given offside decision.

Sunderland didn't allow their heads to drop as a result of that decision, and carried on pushing forward for the equalising goal, leaving themselves exposed at the back as a result. Ighalo had an effort smothered by Pantilimon at one end, before Defoe was again denied at the other end, this time by a superb save from Gomes, who was proving to be Watford's hero once more.

It didn't come as a surprise that Defoe was again the man who had Sunderland's final chance of the game, beating Gomes to van Aanholt's cross, only to see his toe-poke trickle agonisingly wide, leaving Sunderland second bottom of the table.

Swindon Town 0-2 Sunderland: Wyke and Maguire goals get the job done 4 months ago