In the pouring rain, Manchester City substitute Kelechi Iheanacho saw a shot deflect off his back to sink Swansea City in the 92nd minute at the Eithad Stadium, as the hosts won 2-1.

The Swans put in one of their best performances in a long time and in the last moments the Citizens were able to pull away. Swansea traveled to Manchester in the middle of coaching transition with Garry Monk recently being sacked from his position, however temporary boss Alan Curtis still managed to rally up his boys and almost got a positive result.

However, in the end City won the game and left Swansea feeling as they had deserved at least a point.

Teams get used to conditions in feeble opening 45

In the first half both clubs came out a little cautious. City and Swansea combined for seven shots in the opening 45 minutes. However, the two teams were firing their shots accurately with six combined shots hitting the target. The pace of the match was quick, due to the rain and the ball rolling faster because of the wet grass, making for an even encounter.

However, it was Swansea that nearly took the lead in the fifth minute. Swans forward Wayne Routledge received a well placed through ball from Gylfi Sigurdsson near the center of the field, made a run that split the City defense and blasted a shot from within the penalty box to the left hand side, only for Joe Hart to produce a fantastic save to keep things at 0-0.

The Welsh club were dominating the tempo in the first 15 minutes. Swansea was attacking and keeping the possession of the ball in City’s defensive end. However, they did not capitalise on their dominance as they only produced two shots within that time frame. Both shots were on target but Hart was there to stop them from scoring.

City were struggling to gain much in the way of attacking quality, but and Swansea were pressing high and causing huge amounts of trouble to the hosts, but it was the home side who opened the scoring after 26 minutes through former Swan Wilfried Bony.

Jesús Navas took a corner and whipped the ball right into centre of the penalty box, and Bony eluded marker Ashley Williams to head the ball into the back of the net and give City a 1-0 lead.

After taking the lead City gained momentum and kept on putting pressure on the defence, but Lukasz Fabianski kept his side in the game towards the end of the first half with some excellent saves.

The Citizens held on to the 1-0 lead throughout a fairly timid second half, and it seemed they were going to escape with a narrow victory.

However, in the 90th minute Swansea broke through and tied the game at 1-1. The Eithad was shocked when substitute Bafétimbi Gomis fired a powerful close range shot into the roof of the net. The play began with Federico Fernández sending a long range low pass that cut through the City defence, the ball zipped through the wet grass and into the feet of the French forward who made no mistake in scoring.

Swansea had appeared to fight their way back for a hard earned away point. However, the football God's can be cruel at times. In the 92nd minute City launched their final attack after stealing the ball away from Swansea midfield, and scored a dramatic winning goal.

City captain Yaya Toure blasted a shot from just outside the right hand side of the box. He struck the ball with power and it was heading towards goal, but then Fabianski was thrown off by a deflection. Toure shot hit Iheanacho’s back and the ball flew into the net to give City the 2-1 victory.

Curtis will need his players to move on and get them ready for their next game on Sunday against West Ham United. The Welsh club cannot afford to drop anymore points, after this heartbreaking result Swansea sits in 16th place with 14 points. Only one point separates them from the regulation zone. The good news is that their next match will be back at home in the Liberty Stadium. 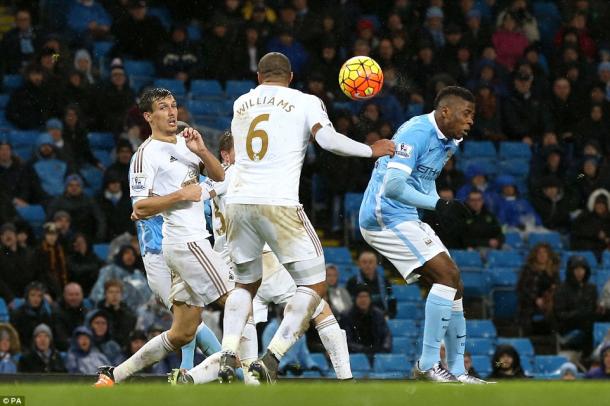