At the start of the season, if you had have told Leicester fans that they'd see their side top of the Barclays Premier League at Christmas, they would have called you mad. However, that dream has become a reality in the past few months with the East Midlands club pulling away at the pinnacle of the 'Best league in the World'.

Their story has been nothing short of a miracle. After seeing themselves rock bottom exactly a year ago, the Foxes pulled off one of the greatest escapes in football history and nearly half a season later, they're being considered as strong title contenders. We've taken a look into just how Leicester have gone from relegation candidates to title challengers.

Widely tipped to go down this season, Leicester's never-say-die attitude has seen them rocket to the very top of the league.  The togetherness of the team is possibly the primary factor for their success and that stems from the foundations put in place by Nigel Pearson. With the exception of a few players, the team gelled perfectly at the back-end of last season, when they dug deep to achieve some great results.

Pearson built a team with a good mix of experience and youth, which may have been a big reason for their imperious form towards the end of last season. The form of Esteban Cambiasso boosted the whole team in terms of morale and performance, his performances earning him the 'Player of the Season' award at the end of the season. Whilst building a team worthy of a top-flight spot, Pearson was very careful to keep the core of his side primarily British. By doing this, it meant that the team could communicate effectively whilst any new signings wouldn't have to overcome a possible language barrier.

With the new season came a new boss, the exuberant Claudio Ranieri, his appointment was highly doubted at first, but his early results instantly silenced any critics.

He made a great impression on the Leicester fans with very smart Summer business, removing some of the 'dead wood' whilst bringing in some quality players. The signings of Christian Fuchs (free) and N'Golo Kante (£5.6million) particularly impressed, as well as the introduction of Napoli captain, Gokhan Inler.

Ranieri made it clear from day one that he didn't want to massively shake up his new side and he certainly didn't lie when he said that. The way he has kept the majority of last season's heroes mixed with a couple of new players was vital in the early season push and has proved very successful so far. Even the players who are yet to properly feature (Kramaric, Benalouane, Inler) have made it clear that they're happy to be part of the side. This team spirit has been a prominent feature of the Leicester sides over the past years and it is now properly starting to pay dividends. 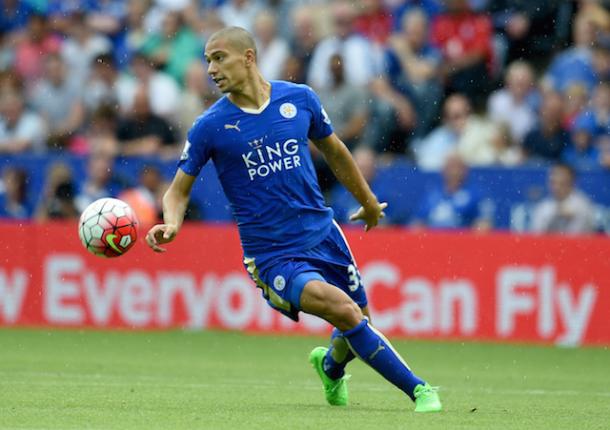 The Foxes have several partnerships that are working a treat this season. The one place to start when talking about partnerships in the Premier League is with arguably the league's best two players: Jamie Vardy and Riyad Mahrez. Both players have really come into their own this season and are being widely mentioned as the two best bargains in world football at only £1.4 million for the pair. No other player in the Premier League has directly contributed to more goals than the two (Mahrez: 20, Vardy: 17).

Vardy sees himself at the top of the goal scoring chart which has earned him four England caps and a massive chance of going to Euro 2016. Mahrez, on the other hand, is allegedly the subject of £35million bids from Tottenham and Manchester United. The two players are almost on a telepathic wavelength, always seeming to know where the other one is going to be, which was highlighted in the 3-2 win over Everton: when Mahrez slipped in Vardy to win the penalty. A mix of goals and assists for both players makes them very hot property, however, both players have admitted that they'll still be Leicester players come the 1st of February. Leicester fans will be desperate to keep Vardy and Mahrez, regardless of the money being offered, because they know that two players in the respective form that they are in are absolutely priceless. 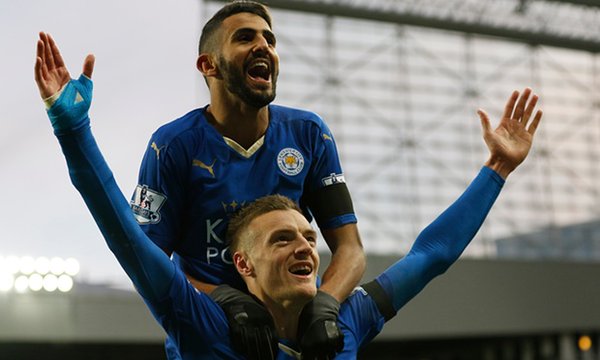 Another of Leicester's pairings that are exceeding expectations is the partnership in the middle of the park, the engine room: N'Golo Kante and Danny Drinkwater. Neither player is particularly technically gifted, but the pair are both full of work and graft.

However, as the season has gone on, Kante has shown that he's adapting to the technical side of being a Premier League midfielder, with his spellbinding runs and cross-field passes, he looks certain to only improve the middle of the Leicester side.

The other half of the engine, Drinkwater, has really turned his game up a gear. After not really showing his capabilities last season, he is finally starting to show the Foxes faithful exactly what he showed them in their Championship winning side two years ago. Whilst Kante is being recognised as one of the best Premier League players so far, Drinkwater is making the Frenchman's life a lot easier with the nitty-gritty work in midfield. The strength in depth has also been tested with a knock to Drinkwater, but Welsh international, Andy King, came straight into the team and fitted into Ranieri's approach perfectly.

Now to the two centre-backs: Robert Huth and Wes Morgan. When Huth signed on loan last January, it took Morgan's game up massively and the permanent signing of Huth has been great news for the skipper. This season the two defenders have really stepped up to the mark. In the second half of last season, they were arguably the best centre-half pairing in the league and they wouldn't be far off this season. Although Leicester have conceded the most goals inside the top 13, the performances of these two defenders have been very solid. The physicality of both is magnificent and they rarely see themselves out-muscled by strikers, however, a lack of pace becomes apparent when faced with the quicker players. This was possibly exposed more last season but, except in the game against Arsenal, neither player has been clearly out-paced by a striker.

A very good partnership is forming in the two full-back positions between Danny Simpson and Christian Fuchs. Neither player saw their name in the starting 11 at the start of the season. It wasn't until around mid-October that they had both cemented a first team spot and they haven't looked back since. The purchase of Fuchs on a free was possibly the bargain of the summer, a player with bags of International and European experience in the position where the Foxes needed cover the most, at left back.

Danny Simpson featured occasionally last season, but it was clear he was second in the pecking order, behind Ritchie De Laet. His hard work and determination has seen him take that place off De Laet and make it his own. He offers a much safer option to the Belgian as he's much more reserved when defending and doesn't fly forward quite like De Laet. The two full-backs are definitely first choices in the minds of Leicester fans and of Claudio Ranieri.

With a packed house every weekend and 32,000 fans singing your name, it's not hard to understand why Leicester are playing so well. The continued support of the fans, even at the lowest point of last season, has been a major factor for the Foxes' good form. A new display in the Kop at nearly every home game sets the scene and constant singing from the Foxes faithful throughout increases the performance. Riyad Mahrez has said that he "feels like he's flying" every time he plays in front of the King Power crowd. Ranieri and his players have shown their appreciation towards the fans on several occasions and as long as they keep seeing their side winning, they won't stop singing.

A sell-out crowd not only at every home game but also at every away game shows how good the travelling support is as well. The 3-0 away win over Newcastle saw over 3,000 fans in the away end whilst a Capital One Cup tie away at Hull in midweek saw a similar following. Leicester fans have seen plenty of late goals at the King Power Stadium and it makes you wonder how much of an influence the fans have on that.

The atmosphere was electric for the three-goal comeback against Aston Villa earlier in the season as it has been for the other games Leicester have been chasing. The amount of points Leicester had won from losing positions at the end of October was more than any other side, and they haven't been losing very often since! Not only does it show the strength of character in the side, it also shows how much of an influence the fans have. 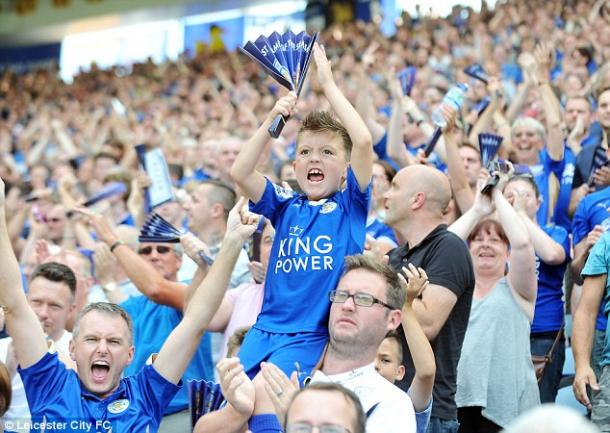 It will be interesting to see if Leicester will be there or thereabouts come the final day of the season. It would be an incredible story if they were. They have plenty of backing, obviously from Foxes fans but also from the neutrals across Europe as well as fans of the lower teams. Lots of people are saying that they don't have the squad depth or the experience. But, everyone said that they'd drop down the table in December, which (so far) they are yet to do. Of the six "impossible" fixtures they're up against, they've already taken ten points from a possible twelve.

If they can get to the 19 game mark still top of the league, then surely they have to be considered realistic title contenders. Even if a title challenge isn't on, the race for a Champions League spot is definitely realistic. The Foxes seem to be the only side in the top six of the table that are actually putting in consistent performances, with Arsenal coming closest. I can't see the Foxes lifting the Premier League at the end of the season, but a European spot is definitely achievable.

I'll leave it with a great stat for the Leicester fans: Of the last six sides to be top at Christmas on Christmas day, only one has not gone on to lift the title in May.

The Warmdown: Hammers hold on to take all three points against Leicester 3 days ago

Analysis: What must Jamie Vardy do in order to terminate his Perennial and Startling goal drought? 5 days ago

The Warm Down: Leicester overwhelmed by sublime Manchester City 10 days ago

Analysis: Can Kelechi Iheanacho show his former club Manchester City how far he has progressed?&nbsp; 12 days ago
//