Carlisle put the pressure on Rovers from the get-go with constant roars from manager Chris Beech urging his side to get in the faces of the home side.

Despite their early pressure, United failed to fashion a real opportunity of note in the opening stages and in fact it was Keith Hill’s side who registered the first chance of the game as Corey Blackett-Taylor played a square ball into the path of Otis Khan who let fly from range, but his effort was tipped over the bar by Paul Farman in the Carlisle net.

On 17 minutes, the visitors same close to opening the scoring themselves as a wicked corner from Callum Guy was met by the head of Jon Mellish but Scotty Davies was on hand for Tranmere to perform a terrific reflex-save to keep the score level.

Both sides showed a willingness to play free flowing attacking football in the first period but the similarity in their style worked against them and it proved to be a half of few chances.

Inside the first few minutes of the second half Tranmere looked to have grabbed the first goal of the game as Blackett-Taylor dropped his shoulder in the box and hit a vicious driven effort which was fumbled by the Carlisle keeper and seemingly crossed the line, but the match officials waved away the protests from the Rovers players.

Blackett-Taylor reacted as any manager would want three minutes later by firing his side into the lead. It was almost a carbon-copy of his previous chance but on this instance, he hit a cannon of a shot which nestled into the top right-hand corner.

Keith Hill managed to pick up where Ian Dawes and Andy Parkinson left off as Tranmere put in a real disciplined yet offensively sound display this evening.

Hill is well known for implementing an attacking style of play on his sides and with the likes of Blackett-Taylor and Kieran Morris in his ranks, the ex-Rochdale boss has all the tools to get Tranmere playing consistent free flowing football in a division which is notoriously filled with ‘long ball’ teams.

Carlisle will be right up there this season

In what is his first stint as a first team manager, Chris Beech has got Carlisle playing some really good football which is no surprise considering the Blues' boss was involved in a Rochdale setup managed by Keith Hill, who played some of the best football we’ve seen in League 2 in recent years.

The visitors set up in a rigid 4-3-3 formation which was extremely hard to break down and it took a real moment of individual brilliance from Blackett-Taylor to break the dead lock.

Despite tonight’s defeat, the Blues still find themselves in the play-off places and if they are able to get a run of wins together in the festive period, something they well and truly have the capability of doing, then they could well find themselves sitting in the automatic places come the new year.

Blackett-Taylor earns the VAVEL MOTM accolade for the second time in four days and the 23-year-old winger is quickly becoming the most dangerous player in the division.

If it were not for a disastrous decision from the match officials, the ex-Villa youngster would have walked away with a brace this evening.

There won’t be a defender in the league that looks forward to a one-on-one meeting with Blackett-Taylor down the left flank and I don’t think it would be wrong to say we are yet to see the true potential of the Englishman. A really exciting prospect to say the least.

Keith Hill’s side will be looking to avoid an FA Cup upset on Friday as they host Brackley Town of the National League North in the 2nd round of the FA Cup live on BBC Two. Tranmere are unbeaten in their previous 18 games against non-league opposition in the FA Cup and will be hoping to improve on last season’s fourth round finish which saw them knocked out by Manchester United.

The Cumbrians host Darren Moore’s Doncaster Rovers in their FA Cup clash on Saturday afternoon. Carlisle reached round three last year but were eventually beaten by Cardiff City of the Sky Bet Championship.

Jesse Marsch sacked by Leeds an hour ago 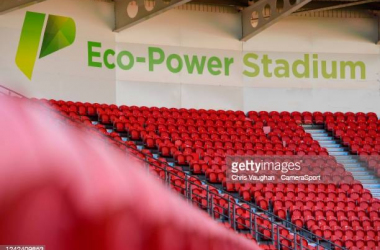