Debutant Jay Bird plundered a late winner mere minutes after coming off the bench to seal a fourth consecutive victory for his new side Dagenham & Redbridge, at the expense of a devastated Scunthorpe United outfit whose efforts didn't deserve to end in such heartbreak.

The Iron had initially cancelled out Harry Phipps' glanced opener with a fierce strike from a defender of their own, Andrew Boyce, amid a dominant period whereby several glaring opportunities were inexplicably spurned.

That parity appeared to be permanent, until the visitors' brittle fragility resurfaced from an inswinging free-kick with just five minutes left of normal time, and substitute Bird - whose acquisition was only announced an hour before kick off - sealed a dream cameo.

Scunthorpe United were without an away victory since December of last year, while their hosts conversely boasted impeccable home form, yet you'd be forgiven for thinking the roles were reversed on the evidence of the opening few minutes.

Inside the very first, Rob Apter burst through the home defence, which recovered but was visibly still rattled as Manny Onariase fired his clearance right at Harry Beestin, who took advantage by clipping around the onrushing Elliot Justham but couldn't get enough of a connection.

Moments later, the Daggers' midfield was too easily bypassed again, with Apter releasing Marcus Carver. Defender Harry Phipps got back just in time to deflect the ensuing effort into the side netting, for a corner that George Taft nodded wide.

Scunthorpe were employing a hugely effective systematic press, which not only prevented the East Londoners from being able to play out but actively forced mistakes in their passing. Visibly panicked, they constantly seemed on the verge of an error in a fragmented opening half hour devoid of any rhythm or coherence.

After another lucky escape, in which a stray ball came mere millimetres from being capitalised upon, Dagenham finally showed signs of life. A quick break saw Walker win a corner, delivered to the far post, where Phipps was denied by Dewhurst at point-blank range.

Shortly afterwards, Walker clipped Omar Mussa's knockdown over a defender magnificently then hared into the box and had a cross cleared. Daggers had only been on top for a matter of moments, but already the signs were ominous.

Sure enough, another set-piece was recycled by Junior Morias out to Myles Weston, whose subsequent inswinging delivery was glanced home via the head of Phipps - a fantastic moment for him, just one day after signing a new two year contract.

This would usually be the cue for Scunthorpe to collapse altogether, but instead they issued an impressive response, undeterred by the familiar setback of going one down. Jacob Butterfield nearly equalised after cutting out Onariase's pass and bombing into the box before shooting wide with the aid of a deflection.

Their most dangerous player by far, Apter, then suffered the same fate as a fierce effort ricocheted off a red shirt, this time dipping wide by mere millimetres. Yet there was only so long that the home side could rely upon fortune.

When Mark Pugh delivered a far-post cross that landed at the right boot of Andrew Boyce, there was nobody from Dagenham to prevent its trajectory into the bottom corner. To say the goal had been coming was an enormous understatement.

Much like their visitors had been, Daggers didn't let their heads drop for long. Before the half hour mark, Joel Taylor had a cross narrowly evade the head of Morias, then Mo Sagaf cleared the crossbar with an opportunistic effort outside the area. 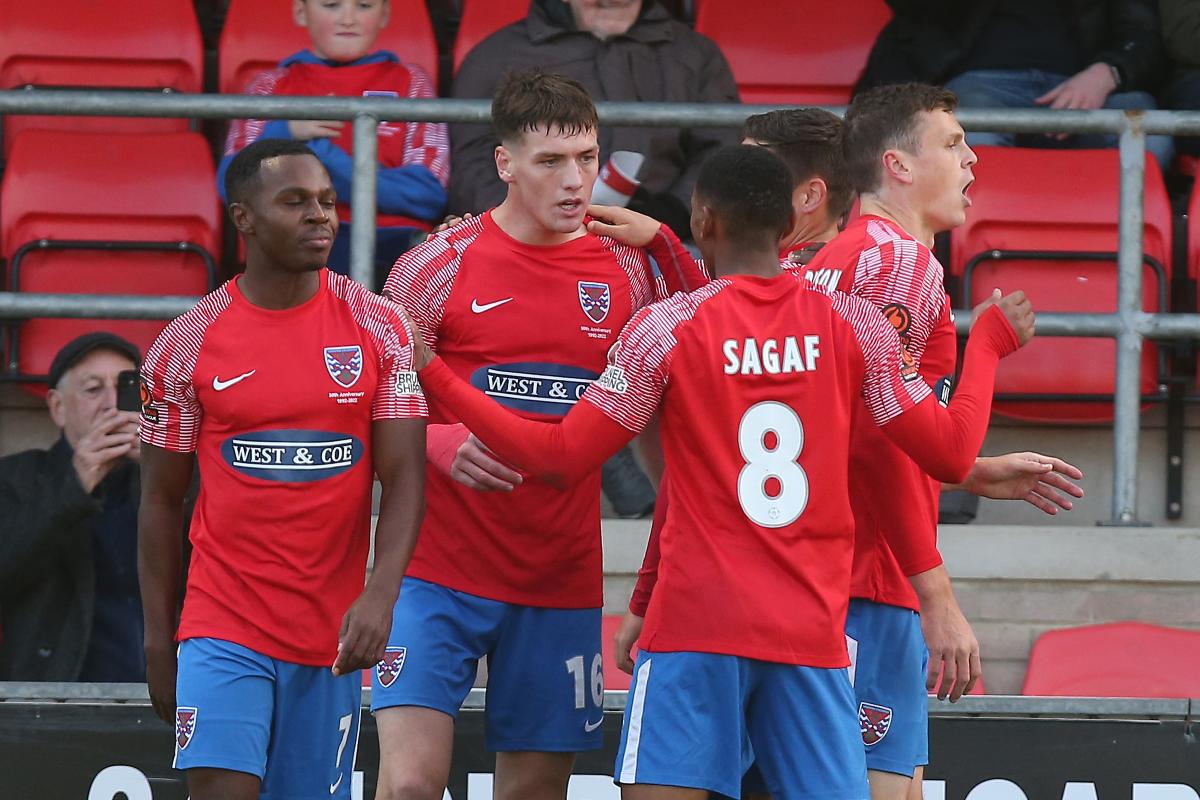 Harry Phipps is embraced after heading Dagenham into the lead. (Image: TGS Photo)

They should have gone into the interval ahead, but somehow Marcus Dewhurst adjusted his body positioning to smother a cross by Walker, the trajectory of which was altered significantly. It was the last act in a half that ended 1-1.

Dagenham were much improved across all departments upon the game's recommencement. Immediately, they had a free-kick which caused chaos among the Iron ranks, however they managed to clear.

Then came a critical event in the contest, whereby Phipps appeared to lash out at Carver off the ball yet managed to escape with only a yellow card, much to the inexplicable fury of Scunthorpe supporters and playing contingent respectively.

They would be no more satisfied with the dynamic that began to unfold. Dagenham would spend sustained periods probing thereafter, but the killer opening that they desperately sought nonetheless evaded them.

Until, that was, the 65th minute, when Morias managed to dart off the shoulder of his marker for the first time. Sagaf put him through one-on-one for the kind of glorious opportunity the Jamaican rarely passes up, but the keeper was out quick to block superbly on this occasion.

Seeking to inject something different into his side, Daryl McMahon duly introduced Jay Bird, a signing announced an hour before kick-off who had only trained with the club once, and not played a competitive game all season.

The striker could not have dreamed of a better impact. After Morias drew a free-kick from his man, Weston stood it up teasingly, and there was Bird to hook into the corner for a dramatic late victory.

Adopting the methodology of attack being the best form of defence, Dagenham came agonisingly close to killing the contest off altogether. Bird, visibly coursing with adrenaline from his decisive contribution, hit an audacious half volley with the outside of his left boot that crashed against the post.

Walker suffered the same fate after an incisive breakaway in the dying seconds, beating Dewhurst but not the woodwork, however that didn't dilute the sense of delight when the full time whistle soon reverberated around the ground.

Coupled with advantageous results elsewhere, it leaves them in a good position just one point off the play-offs with a game in hand too. Meanwhile, Scunny remain in massive trouble.

Myles Weston (Dagenham & Redbridge) | There was no player who noticeably stood out during the contest but, having conjured up two perfectly-weighted passes to assist both goals, Weston gets the accolade. At 34 years old, he shows no sign of slowing down and has now set up five this season, after being the league's leading provider last term.

Netherlands vs Qatar preview: World Cup Group A, Round 3, 2022 8 hours ago

Preview Brazil vs Switzerland: World Cup Group G, Round 2, 2022 a day ago

Chris Waddle: "Everywhere we went, we entertained" 14 hours ago

Southampton Women 0-3 Reading Women: WSL side comfortably see off Saints a day ago

Ipswich Town 4-0 Buxton: Blues breeze into FA Cup third round a day ago