USA are through to the semi-finals of the 2015 Women's World Cup after a dominant 1-0 victory over China in Ottawa.

Captain Carli Lloyd's 51st minute header was enough to see off the challenge of China and see them through to the next stage for the seventh consecutive World Cup.

This fixture was a repeat of the 1999 World Cup Final which the USA won to claim their second World Cup crown.

The US had Megan Rapinoe and Lauren Holiday suspended after they picked up a second yellow card in the victory over Colombia.

Kelley O'Hara and Alex Morgan replaced the two suspended players, whilst Alex Rodriguez was selected ahead of Abby Wambach.

China meanwhile named the same side for the third consecutive game as they looked to reach only their second World Cup semi-final.

Rodriguez had a fantastic chance to put the US in the lead after just four minutes when she was put clean through on goal but she skied her shot high and wide.

Great flank play from Heath as she dribbled past her defender, standing up a ball to the far post which O'Hara got on the end of but her diving header bounced wide.

USA were dominating possession and beginning to put lots of pressure on the China goal but didn't create any clear-cut chances - the story of the Americans World Cup so far.

China are a renown for their strong defence and ability to frustrate the opposition when attacking and that is exactly what was shown in the first-half.

USA Captain Lloyd fired in a fantastic free-kick from 25 yards out but Fei Wang managed to punch it away to safety.

USA had 10 shots to China's three in the opening half, but two of those were blocked and the other was blazed over the bar in a dominant American display, despite only having 53% of the overall possession.

Perfect way to start the second-half

USA got the second-half off to a flyer as Lloyd headed home just six minutes after the re-start to give the US a well-deserved lead. ​

Johnston lofted a high cross into the penalty area and Lloyd leaped above her defender to plant a perfect header in the bottom right corner. 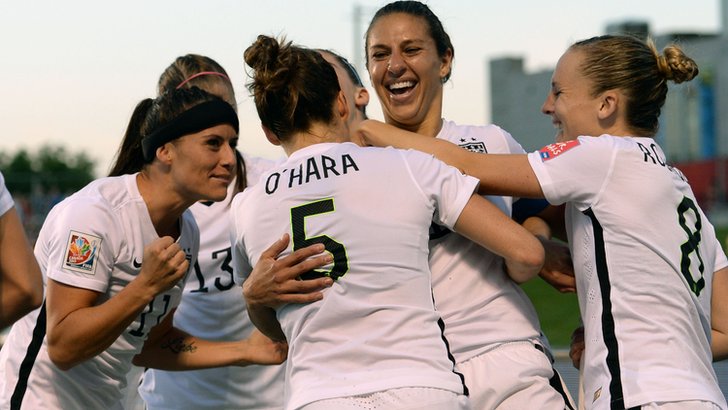 Finally the USA's dominance in this game has paid off.

O'Hara has been in the wars after she is caught by Fei Wang and left with a bleeding nose before shortly after being replaced by Christen Press.

China managed to mount some pressure and clip a dangerous ball into the USA box and almost got a shot off but the US defence were alert to the danger and cleared the ball.

Brian almost doubled the US lead after her shot from the edge of the area rattled the crossbar and bounced straight down to Lloyd who tapped in the rebound but was called offside.

China pushed hard in the last ten minutes to gain that vital equalising goal to send the tie to extra-time but they struggled to carve out any chance and the US saw the game out.

Favourites to square up in Montreal

USA will face Germany in the semi-final of the Women's World Cup on Tuesday at the Olympic Stadium in Montreal.

Their opponents Germany made it through to their fifth consecutive semi-final after they beat France 5-4 on penalties after the game finished 1-1 after 90 minutes of play.

After 120 minutes, it was penalties that would decide the winner of a pulsating game and it turned into a penalty master-class.

It was France's Claire Lavogez who missed the pivotal penalty after her effort was saved by Nadine Angerer.

Borussia Mönchengladbach: State of the squad - June 2022 6 days ago

Fatigued or not, England's lacklustre performances are becoming a worry 16 days ago