The three contenders for this year’s FIFA Ballon d’Or Award and FIFA World Coach of the Year for Men's Footbal have been determined today. The awards will be given out in Zürich on 11 January 2016. 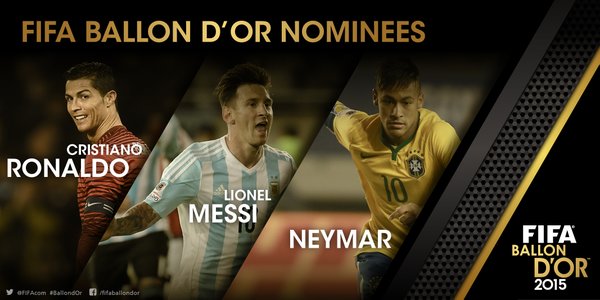 For the fifth year in the row, both FC Barcelona's Lionel Messi and Real Madrid's Cristiano Ronaldo are among the top three in the shortlist for the Ballon D'Or. The newest name is FC Barcelona and Brazilian international Neymar, for his titles won at the club level and importance to the Catalans to a treble (La Liga, Copa del Rey and UEFA Champions League).

Neymar is expected by various people to be one of the successors to win this award once Messi and Ronaldo are out of consideration. The Argentine will be looking to get his fourth FIFA Ballon D'Or following an amazing season for the Blaugrana while Ronaldo is looking to get third. Neymar will join Kaka, Ronaldo, Ronaldinho, Rivaldo, Roberto Carlos and Romario as the seventh Brazilian to be in the shortlist for the Ballon D'Or.

In the 2014/15 season, Lionel Messi scored 58 goals in all competitions and picked up the aforementioned treble and Neymar scored 39 for the Catalan club. Meamwhile Ronaldo out-scored both of them netting 61. 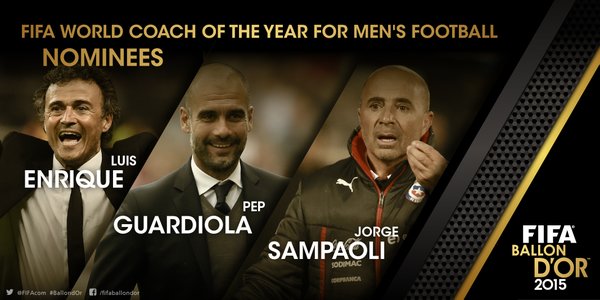 Pep Guardiola, Spanish coach for Bayern Munich, Luis Enrique, Spanish coach for FC Barcelona and Jorge Sampaoli, Argentine coach of Chilean national team have been nominated for the most prestigious coaching award in world football. Luis Enrique is the favourite heading into this having won La Liga, Copa Del Rey and the fifth UEFA Champions League in Barcelona's history. Guardiola won the Bundesliga in the 2014-15 season having lost in the semifinals of the DFB-Pokal and UEFA Champions League to Barcelona as well as finishing runners-up in 2015 DFL-Supercup. He won the award in the 2011 edition.

Sampaoli on the other hand, became instrumental in providing the best moment of Chilean football by leading the Chilean national football team to their first Copa América title, after defeating Argentina in the final in the 2015 edition on home soil in July.

Arsenal v SL Benfica: How to watch, Kick- off time, team news, predicted line-up and ones to watch.&nbsp; 5 days ago

What can Manchester City expect from Borussia Monchengladbach? 7 days ago