AS Roma, Juventus, Manchester United, Inter Milan and Napoli are all in what appears to be the largest game of chicken ever seen in the transfer market. Names such as Mauro Icardi, Gonzalo Higuain, Edin Dzeko, Romelo Lukaku, Paulo Dybala, and Arkadiusz Milik all appear to be involved directly and indirectly in who ends up where for the upcoming season.

If Lukaku and Dybala swap teams, that leaves Icardi without his preferred option in Juve. That would also put Higuain's place at Juve in serious jeopardy, as they're desperate to offload him, but he, in turn, he is desperate to stay. If Inter doesn't sell Icardi they won't have the funds to purchase their top targets in Dzeko/Lukaku. Every deal unlocks the next, as well as blocking the other in a fascinating way.

Where does all this leave Roma?

The two most likely transfer targets to end up at Roma are Gonzalo Higuain and now Mauro Icardi. Each come with their own unique baggage, but each has a wildly different set of problems to the other. With Edin Dzeko making it clear he wants to move to Inter, and will not sign a contract renewal Roma have no choice, but to maximize an asset and look for alternatives.

Reasons to be Optimistic about Higuain

There are potential benefits to the move, however. Higuain while having only scored 11 league goals last season is a proven goal scorer, he's scored over 20 goals in a season five times in his career. He's seen it all, won almost every competition, and would lend experience to a somewhat young and naive Roma team. Most importantly his style of play would blend with that of new Roma coach Paulo Fonseca. The coach is trying to implement a much more technical style to the team, relying on passing and combination play to put the ball in the back of the net. Even during a poor season by his standards Higuain averaged over 22 passes per match bettering both Icardi (14.1) and Dzeko (21.4) and a passing percentage of 83.7 while with Milan according to WhoScored.

Reasons to be pessimistic about Higuain

Higuain had a horrible 2018/19 season split between AC Milan and Chelsea FC on loan, in which he looked highly frustrated and unmotivated to get back to the player who recently broke the single-season scoring record in Serie A. Now that he's sulked his way back into the fold at Juve with his favoured manager Maurizio Sarri he's determined to fight for his place and so far refused a move to Roma for a reported loan initially for $9 million Euros with an obligation to buy for $29 million the following season. The player is turning 32 in December, has an incredibly high transfer fee and would command a large salary for a club the size of Roma.

Reasons to be Optomistic about Icardi

The case for Icardi is simple, he's a deadly poacher. World class in putting the ball in the back of the net. At the age of 26 he's already scored almost 160 goals in his career, and was on the path to becoming Inter's all time record scorer currently held by the legend their stadium is even named after in Giuseppe Meazza. In fact, he's already the eighth leading scorer at the legendary club only needing 158 to surpass the all-time great. While he had a down year in terms of goals scored, he still beat Dzeko's goal total even though he had been frozen out of the team for a time.

Reasons to be Pessimistic about Icardi

All the reasons above are the reason why Icardi has himself dug in his trench in not wanting to leave the club. He has made it clear staying at Inter is his preferred option, however, the way he has gone about it has left him to be ostracized from the entire organization. He has turned the fans against him by attacking the clubs Ultras in his biography, angled for pay rises at every opportunity, and completely dividing the dressing room last season resulting in him being stripped of the captaincy. Having his controversial wife as his agent, and all their antics have had them labelled as being toxic.

Who Should Roma Choose?

Mauro Icardi. It has to be Icardi. The market opportunity to grab a player of Mauro's pedigree, age, and magnitude does not come around very often. In fact, for Roma, it's a huge advantage. His value has plummeted from at least $120 million Euros last summer to a rumoured 60-80 now. With Inter both desperate for Mauro to leave and new manager Antonio Conte obsessed with bringing Dzeko over to the black and blue side of Milan, Roma actually have some chips to play in getting the number 9 over the line. For Roma, Icardi would be the ideal age to invest heavily both in transfer fee/wages, because he would above all be able to contribute on the field for several years at least, and with how the club is run selling players if they're able to rehabilitate him still be able to get a sizeable return should he move on in the future.

Still, this is something to think about as these astronomical figures get banded about the headlines... 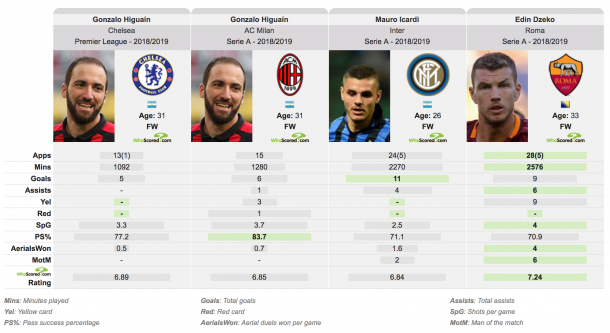 Atalanta vs Napoli: Live Stream and Score Updates (2-0)5 days ago

As it happened: Napoli reach Coppa Italia final25 days ago

Juventus vs Fiorentina preview: Bianconeri desperate to get back to winning ways against rejuvenated visitors5 months ago

Napoli vs Juventus: Maurizio Sarri makes his anticipated return to the San Paolo5 months ago

Atalanta vs SPAL: Atalanta look to continue their strong form against struggling SPAL6 months ago

Lecce vs Inter Milan: The Nerazzurri look to keep pace with Juventus for first place 6 months ago

AC Milan vs Udinese: Udinese travel to the San Siro6 months ago

Juventus vs Parma: Juve look to remain atop Serie A6 months ago
Restore your password
Please enter your user name or email.
Login Member or Writer Panel
Enjoy your own Customized Newspaperwith VAVEL topics' carousels!