Both teams lined up formation wise at least, similar to how many would have expected.

Hungary used the same 3-1-4-2 formation deployed against Portugal however, this time a far better result was yielded.

The two wingbacks were crucial to the success of this system, out of possession they both dropped back to form a narrow five while in possession, the two pushed very high and wide looking to exploit space behind the French defensive line.

On paper France lined up in their new 4-1-2-1-2 system in practice though this ended up as more of a 4-3-3 with Antoine Griezmann occupying the wide right while a flat midfield three sat behind him.

Hungary’s deep and narrow shape unsurprisingly congested the middle of the pitch forcing France to play through the wide areas although, too many times France’s entire midfield would drift over to the right side, congesting the space even further and severely limiting the possibility of a switch. 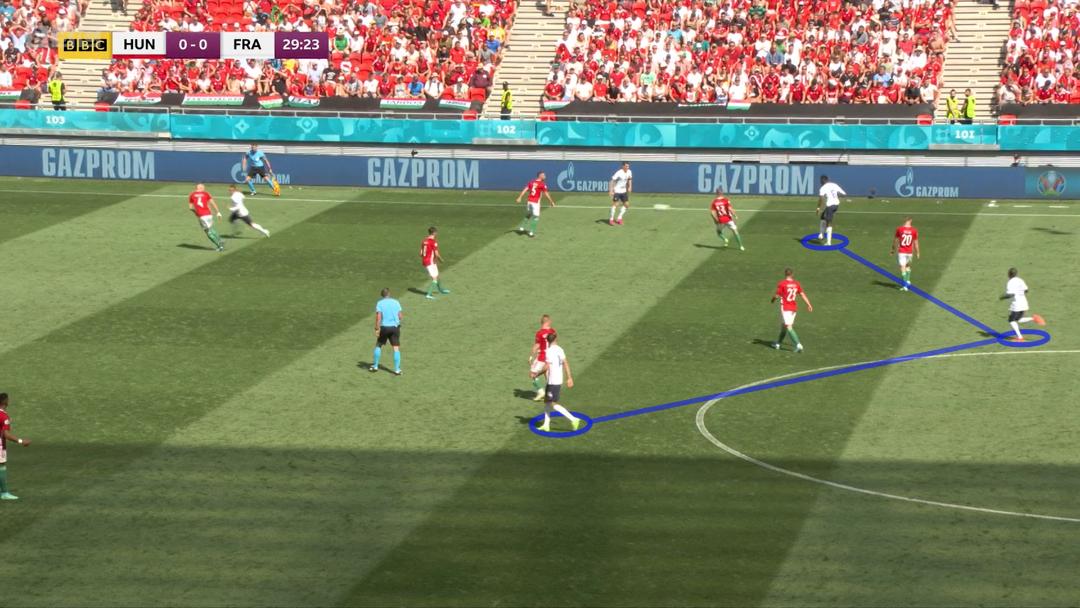 Even though France dominated the first half, Hungary scored late on with the goal coming from an attempt to isolate right back Benjamin Pavard, something that occurred several times at the beginning of the half.

Allowed far too much space, left wing back Attila Fiola executes a perfect give and go before slotting home after beating Pavard and Raphael Varane in a foot race. 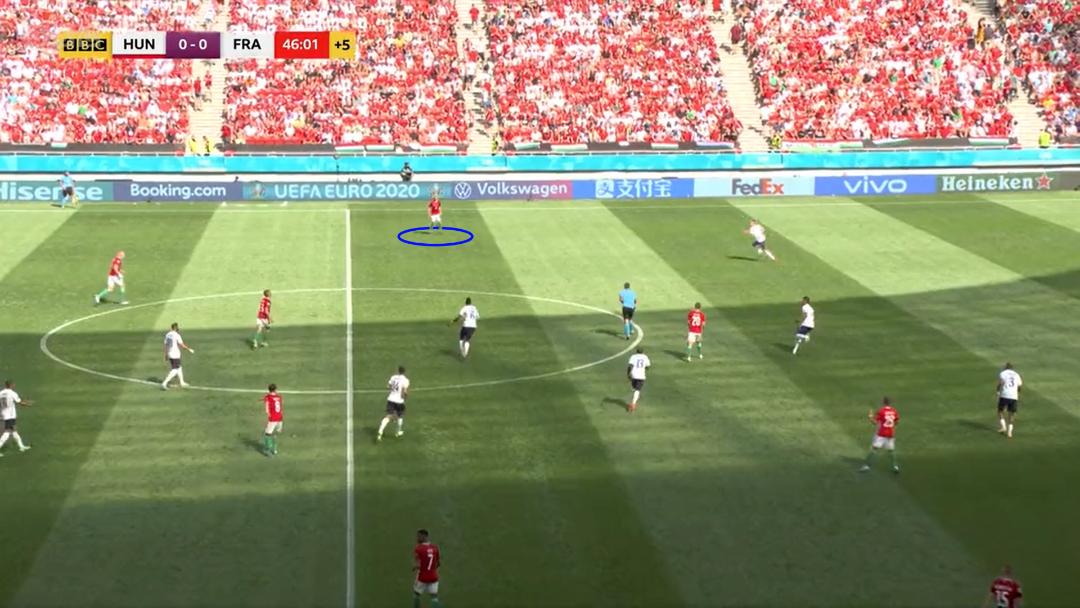 Hungary did well to exploit the space left on the flanks, Pavard knew he could not push up to Fiola while Greizemann’s defending done centrally meant he had almost full reign down the left.

France’s goal on the other hand was more befitting an English team of old rather than Les Bleus. A long ball from goalkeeper Hugo Lloris immediately after a Hungarian free kick excellently sends France on the counter.

The Hungarian defenders are clearly running back to their goal in fear but letting the ball bounce after coming over their heads is seriously bad defending.

Mbappe still has to provide magic by controlling the bouncing ball and delivering a delicious cross for Griezmann. You cannot help but think a simple header from one of Hungarians in retreat could have stopped the entire attack.

Despite employing their new 4-1-2-1-2 for the fourth consecutive game, France returned to their 4-2-3-1 (deployed during their 2018 World Cup success) in the second half after going a goal down.

Manager Didier Deschamps’ preference to return to this system and the personnel used before this tournament suggest you cannot teach an old dog new tricks.

The introduction of Ousmane Dembele in the 57th minute for Adrien Rabiot allowed Paul Pogba and N’golo Kante to occupy their familiar double pivot while Griezmann was able to play behind in the number 10 role just behind the forwards. 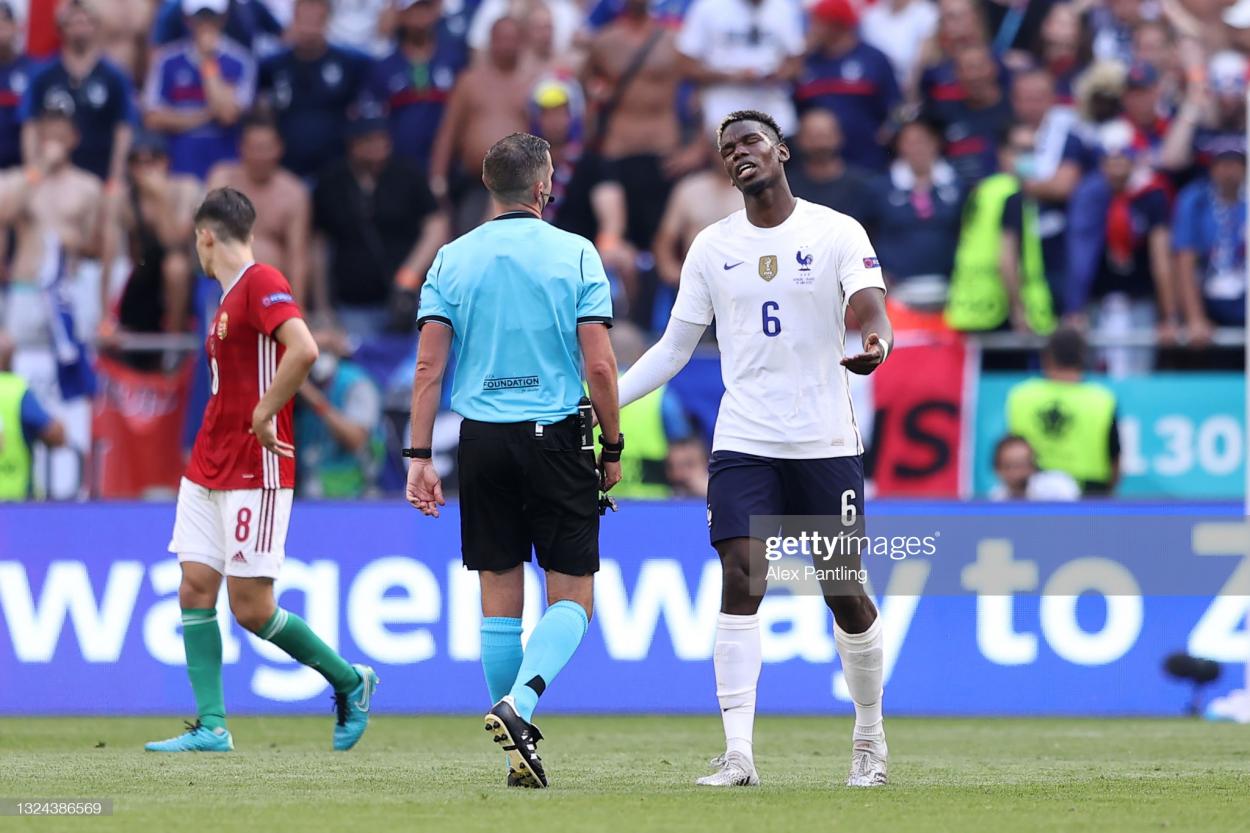 Although Dembele gave the ball away far too much because so much of play was focused down the right that he continued to have the chance to take on his man.

Dembele’s wide position meant Pavard was sitting narrower and deeper looking to recycle possession across the backline when he received it rather than attempting a cross.

Surprisingly, France did not attempt to play down the left more, Lucas Digne was drafted in because of his superior crossing ability however, apart from a few in the first half (which almost came off) he hardly got to use his ability.

It is strange Digne was not given the opportunity to play more crosses considering how frequently and how poorly his teammates were playing them in.

Griezmann was the worst culprit for this, after moving central he frequently found space outside the box to deliver consistently underwhelming crosses to the far post.

France’s failure to play incisive passes into the box resulted in the bombardment of crosses.

Once this occurred it was a matter of time before Oliver Giroud was summoned from the bench.

Giroud replaced an underperforming Karim Benzema who was poor aerially and did little to build up play from deep positions. PSG forward Mbappe proved the greatest threat to the Hungarian goal.

Hungary did well minimising the space for speedster to run into however, his close control and dribbling within crowded areas showed the 22 year olds class.

Defensively France began to engage a gradually more aggressive press the further the game went on, throughout the second half this was usually seen as a 4-2-4 with Griezmann becoming a second striker. Unsurprising, Kante was crucial to the success of the press.

Kante would often leave the pivot in order to press Hungarian midfielder Adam Nagy when he dropped to receive a pass from the defence, the Frenchman won the ball several times helping launch counter attacks.

Kante often drifted over to the left towards the end of the match when France where in possession however, because Pogba would do the same on the right there was no one to stop Hungarian counter attacks. 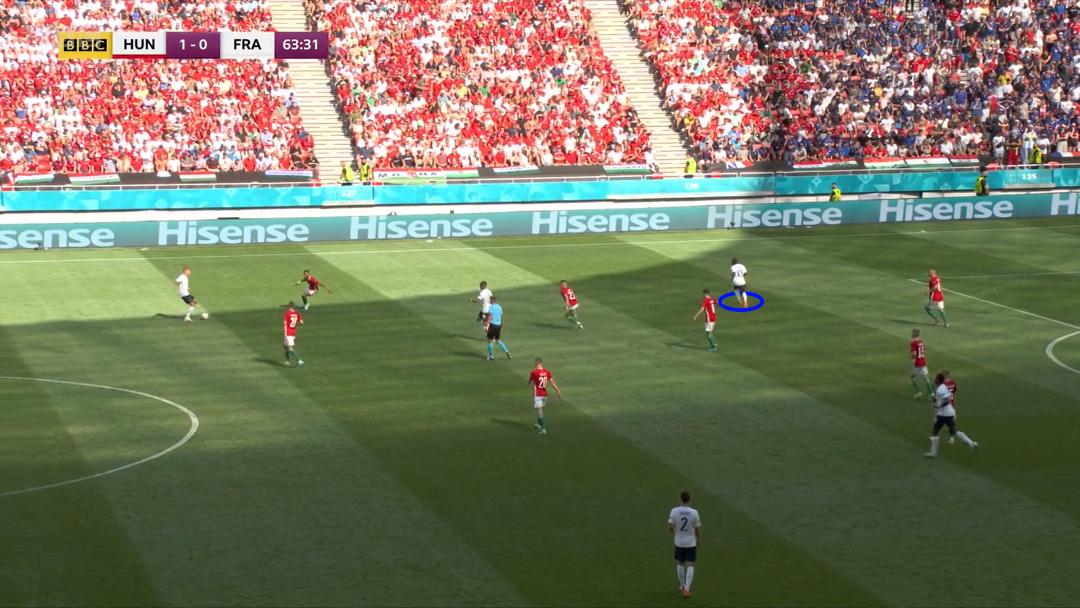 Hungary’s 3-1-4-2 eliminated the space in the central areas forcing France to look for space out wide. The two Hungarian strikers would drop back in front of the midfield, cutting passing lanes to Rabiot and Pogba.

Striker Rolland Sallai was a constant out ball for the Hungarians, the pacey forward looked to exploit space left behind by the high French defensive line. This out ball was crucial to reliving the constant pressure used by the French. 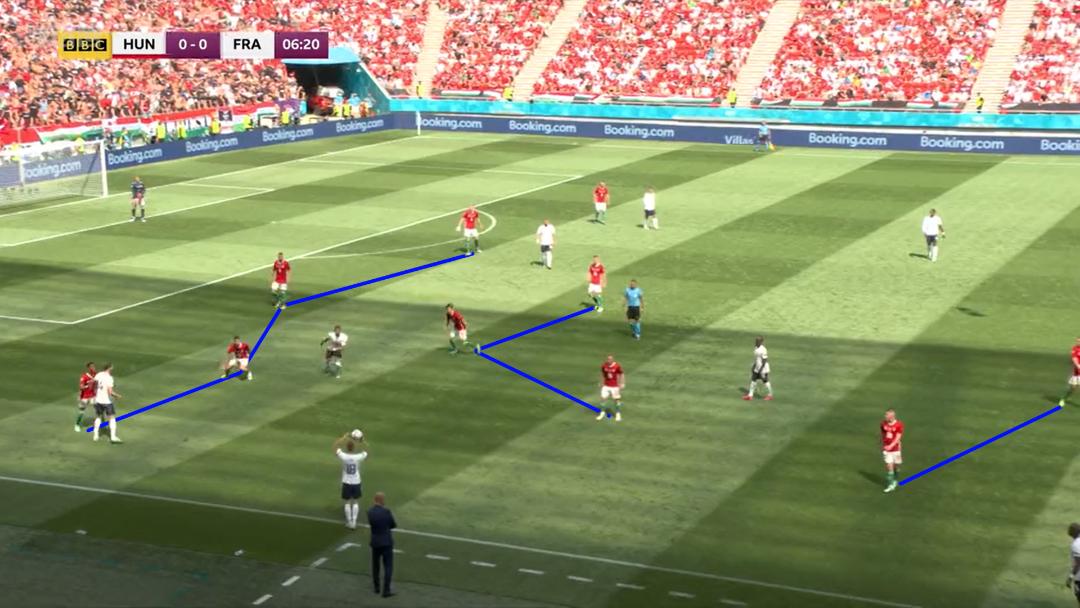 During the first half the midfield successful shuttled across to eliminate space against the right dominant side. While Nagy would push up to form a three, the two wide central midfielders would quickly break the line to close down either Pogba or Rabiot.

Midfielder Laszlo Kleinheisler was vital to breaking up the play (winning three tackles) before moving into the right channel looking for a cross.

The ginger midfielder likened to Paul Scholes used his ball carrying ability to progress the ball while his ability to win four fouls was important to slow down the game and frustrate the French.

Defensively the Hungarians were solid, RB Leipzig defender Willi Orban martialled his defence excellently an invaluable skill during a backs to the wall performance like this.

The defender progressed the ball decently even succeeding with three long balls. On the right of the back three, Endre Botka was there simply to defend, and he did this by winning four tackles.

Both Botka and Orban did well double teaming Mbappe and limiting his ability to cut in from the left however, Botka’s his wide right positioning when play was being built from the back meant he did his best to stay out of the way.

While both wingbacks dropped deep when out of possession, on the left Fiola would stay narrow affording Pavard plenty of space in the first half.

Meanwhile, on the right Loic Nego would stay tight to Digne not affording him space to deliver any crosses although, Digne should have countered this by staying wider forcing Nego to come with him or leave space for someone to exploit.

SC Freiburg 1-3 Borussia Dortmund: Teenage dynamic duo wrap up all three points for Dortmund after a goalkeeping blunder 3 days ago

Union Saint-Gilloise: A club owned by a poker player defying the odds 10 days ago