France started their Euro 2020 campaign on Tuesday night with a 1-0 victory over Germany. Mats Hummels’ 20th minute own goal was all that separated the two sides although, France did find the back of the net twice more before both being marginally ruled offside.

Although by no means a classic between these two colossus of international football, spectators were still treated to several outstanding personal performances. Paul Pogba and N’Golo Kante, (two thirds of the French midfield) were simply sublime against Germany. Another game in which France remains undefeated when these two start together, when they play like this together you wonder if they will ever lose.

Kante was all over the pitch today making crucial interceptions and tackles in every third of the pitch before managing to carry the ball seamlessly serve through the German midfield. Paul put on a performance typical of when international duty rolls around, the Manchester United man was creator-in-chief on the right-hand side of the pitch, his instinctive passing helped create the first goal while, a slight delay prevented him from creating another. 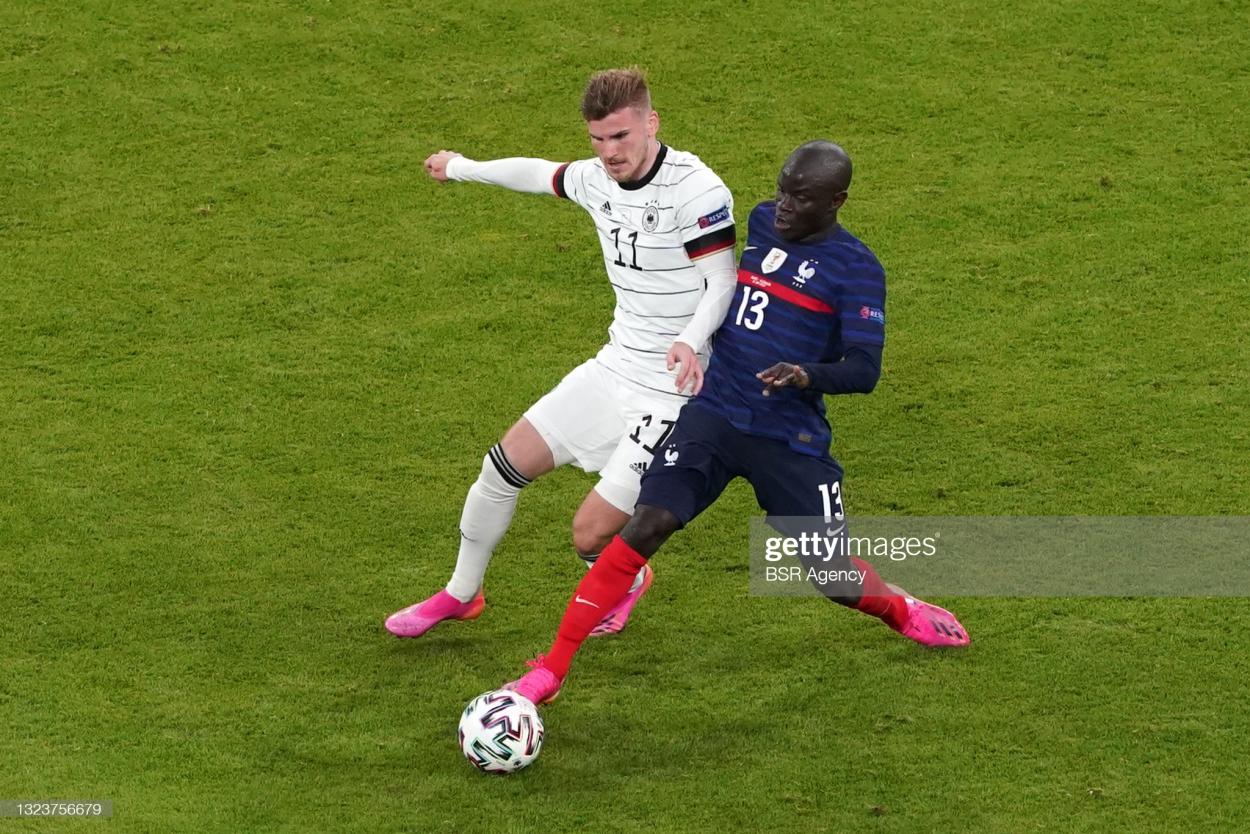 The victory allows France to seize control of the Group F as they their next game sees them travel to Budapest to face group minnows Hungary. A victory would guarantee access to the knockout stages while, if Portugal and Germany take points off each other only a draw will be needed on the final day to secure top spot.

Didier Deschamps’ men were happy to defend their narrow lead against the Germans, if France needed a goal we would not have seen such a deep block for such long periods of the game. Tuesday nights game summed up Deschamps' philosophy, win by any means necessary.

Throughout the game when France lost possession in Germany’s defensive third, they would quickly engage in a high press (although this happened less the more the game went on as France gradually became less expansive) which they would complete with relative success. 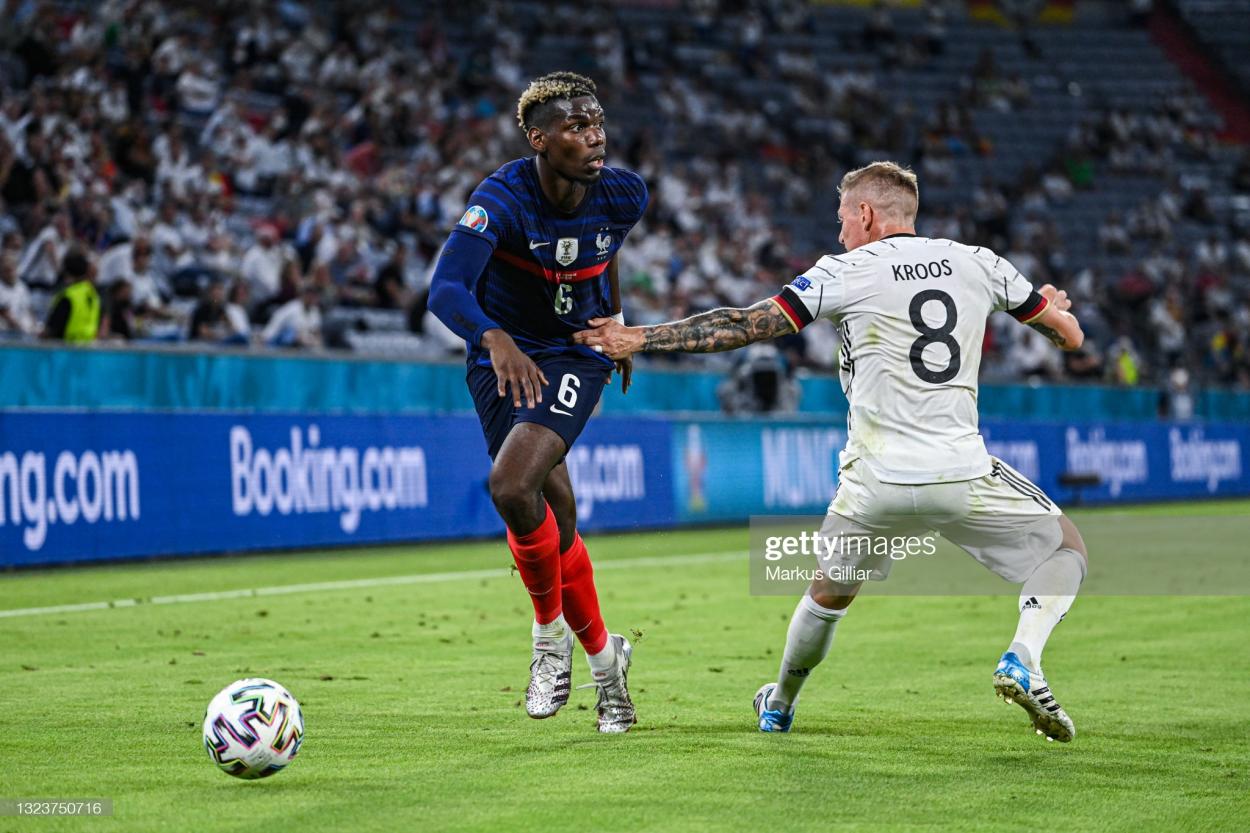 However, when this initial press was broken the French team would conservatively retreat with the defence staying on the edge of their own 18-yard box. This meant the team would drop back into a narrow 4-3-3 although, at times it became a 4-5-1 with Karim Benzema remaining up top while Kylian Mbappe and Antoine Griezmann are on the flanks defending but anticipating counter attacks.

Conservative strategies like this cannot be pulled off without a rock at the back and that was Raphael Varane on Tuesday night. The Real Madrid centre back not only showed the intelligence to deal with Thomas Muller and Kai Havertz’s intricate runs but he also used his technical ability to bypass the front line of the German press with long passes to Pogba or one of the forwards.

Throughout the game France looked their most dangerous when on the counterattack, this was facilitated by the deep bloc they would retreat into, inviting the Germans up field before inevitably breaking into the space left behind. Mbappe’s godly pace allows him to exploit this space more than most especially when coming up against a slow defence. In fact, there was times when Mbappe was so far ahead of the rest of his teammates he was forced to chase after his own through balls.

Mbappe operated down the left channel for the majority of the game, utilising the space left behind wingback Joshua Kimmich. Despite Kimmich’s desire to push up and support the forwards, Matthias Ginter the left sided centre back could do little to stop Mbappe. The PSG forward frequently isolated either Ginter or Hummels with devasting effect. 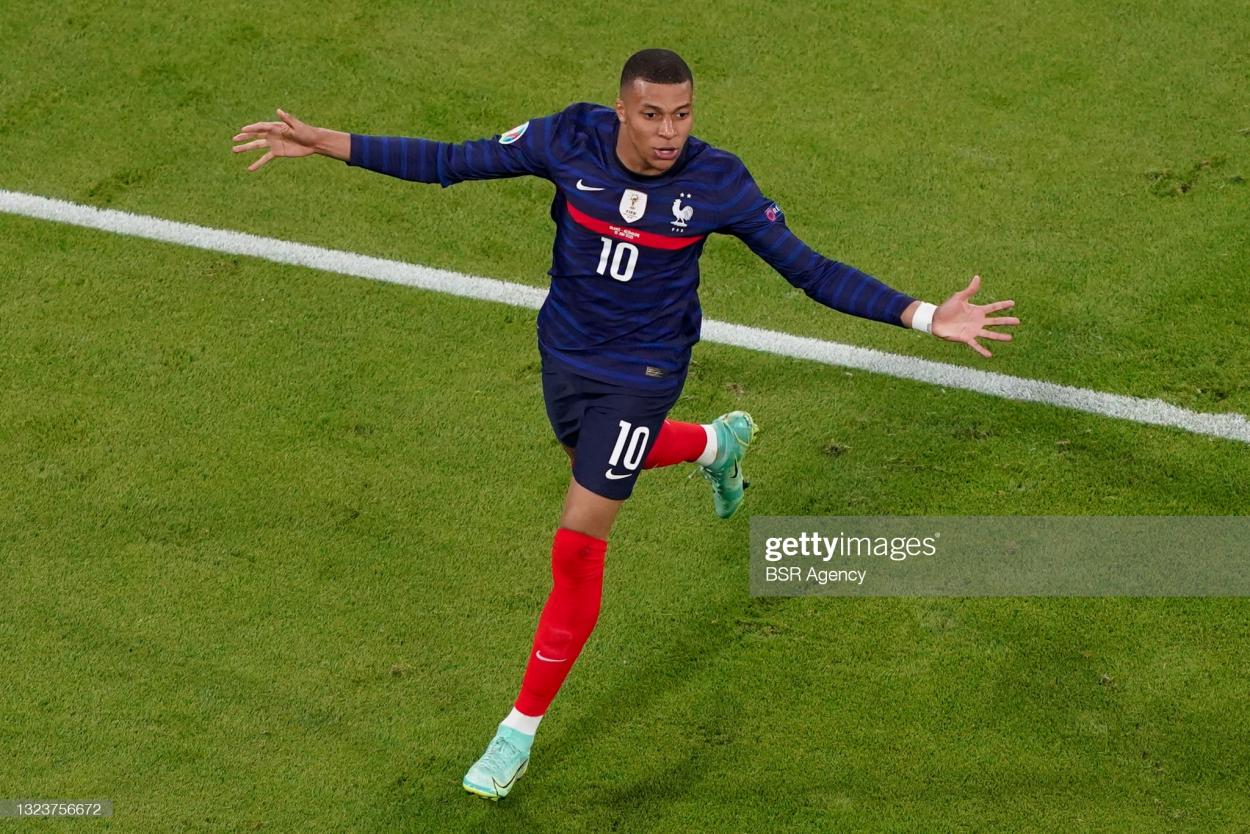 This happened for the first of the two disallowed French goals. Mbappe ran at an isolated Ginter, too afraid to commit a tackle the defender backs off and backs off before a low curved shot with all the composure in the world managers to find the bottom corner. Of course, this goal was ruled offside much to the dismay of French and neutral fans alike it was however, a massive let off for Joachim Low’s side.

Pogba was crucial to French counter attacks as well, when Mbappe could not be found a direct ball to Pogba, the most advanced of the midfield was a suitable alternative. Pogba even set Mbappe away for the second offside goal but a slight delay in the pass meant the forward was marginally offside.

The German national team has been disastrous since their 2018 World Cup group stage exit. Despite remaining with boss Joachim Lowe, the manager who is soon to step down has overseen the ousting of several players and the tinkering of formation across the previous three years.

Low has flopped between a three at the back and a four at the back system before a 6-0 defeat to Spain last November while playing 4-3-3 finally made up his decision. Despite using this 3-4-2-1 formation in the two warm up games, the Germans looked as if they had never played the formation before in their lives.

The two wingbacks, Kimmich and Gosens were the worst culprits, both produced very little in the first 70 minutes despite being afforded plenty of space by the narrow French defensive shape, they did admittedly come alive for the last 20 however, that is still very poor. From the second half, Kimmich began to float infield playing like a more orthodox midfielder and although he did see more of the ball both Kante and Adrien Rabiot dealt with the Bayern Munich man well. 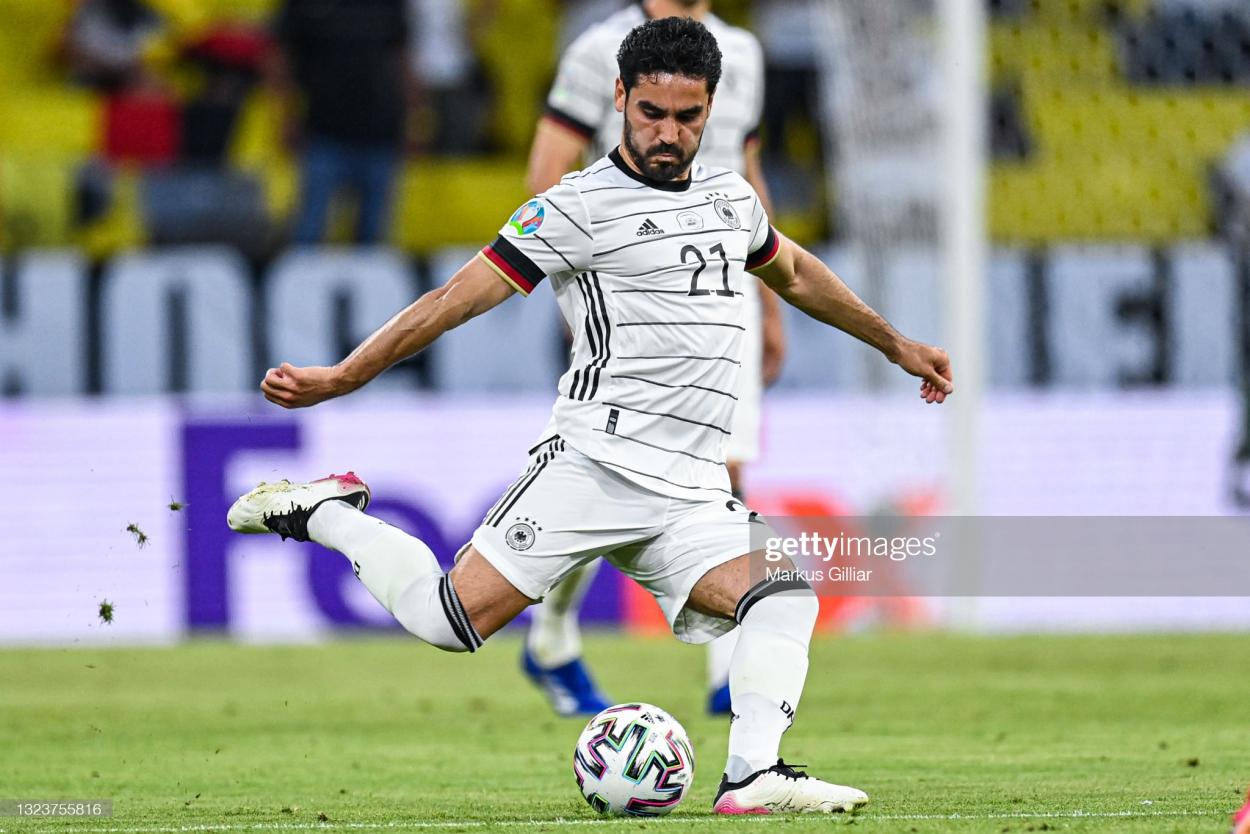 Centrally, Ilkay Gundogan did progress the ball well Toni Kroos however, was nowhere to be seen. Germany missed a defensive anchor like Kante, a defensive midfielder could have both stopped direct counter attacks and limited the influence of advanced midfielder Pogba. Meanwhile, the removal of Serge Gnabry (the only player who looked like scoring) for Timo Werner, a player who relies on space to run into made very little sense.

Borussia Dortmund vs Union Berlin preview: How to watch, kick-off time, team news, predicted lineups and ones to watch 2 days ago

FSV Mainz 05 vs SC Freiburg preview: How to watch, kick-off time, team news, predicted lineups and ones to watch 3 days ago

Chelsea vs Zenit St Petersburg preview: How to watch, kick-off time, team news, predicted lineups and ones to watch 7 days ago

Borussia Mönchengladbach vs Arminia Bielefeld preview: How to watch, kick-off time, team news, predicted lineups and ones to watch 9 days ago