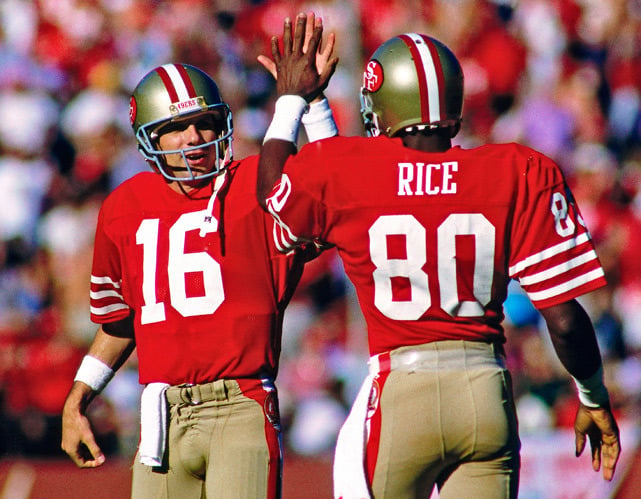 The San Francisco 49ers are a NFL team playing in the National Football Conference in the NFC West division.

The 49ers have won five Superbowls, this number is only bettered by the New England Patriots and the Pittsburgh Steelers.

They have won 19 NFC West division titles with their last coming in 2012. That year they also won the NFC Championship game and went onto Super Bowl 47.

On February 3, 2013 they faced the Baltimore Ravens in Super Bowl 47. That game came with a lot of hype as for the first and only time to date two brothers were head coaches opposite each other. John Harbaugh coached the Ravens with Jim Harbaugh coaching the 49ers.

This game dubbed the “Harbaugh Bowl” also became known as the “Blackout Bowl” as a power outage in the Superdome in New Orleans delayed the game for 34 minutes.

The Ravens built up a 28-6 lead before the outage and looked to be sure of victory however after play resumed the 49ers mounted a comeback scoring 17 unanswered points in the third quarter to cut the lead to just five points at 28-23. The Ravens went on to win a close game 34-31.

The 49ers qualified for the playoffs in the following season but have not played playoff football since.

Their first one came on January 24, 1982 in Super Bowl 16, when they defeated the Cincinnati Bengals 26-21. Quarterback Joe Montana was named MVP for the first of three MVP awards in the Super Bowl.

This would be first of three Super Bowl wins for Head Coach Bill Walsh and the first of four wins for Montana. Both legendary figures would later go on to be inducted into the Pro Football Hall of Fame.

On January 20, 1985 at Super Bowl 19 the 49ers won their second championship in three years when they defeated the Miami Dolphins 38-16. Again Joe Montana would be named MVP.

The 49ers third championship would come at Super Bowl 23 as on January 22, 1989 they would defeat the Cincinnati Bengals in the big game for the second time, this time coming out 20-16 winners. This time Hall of Fame Wide Receiver Jerry Rice picked up the MVP award.

Super Bowl 23 would be Bill Walsh last game in charge of the 49ers but it didn't take the 49ers long to win their fourth championship as they were back in the big game just one year later. This time they put a heavy 55-10 defeat on the Denver Broncos on January 28, 1990 in Super Bowl 24.

George Siefert got his first of two Super Bowl rings replacing Walsh as HC, but it was business as usual for QB Montana picking up his third and last MVP award. The 49ers would be the first team to win back-to-back Super Bowls with two different head coaches.

The last of the 49ers Super Bowl wins to date would come on January 29, 1995 in Super Bowl 29 as they defeated the San Diego Chargers 49-26. QB Steve Young was named MVP in this win. Young, a back up for his first few years at the 49ers got his chance to lead the team when Montana injured his elbow in the 1990 NFC Championship game, an injury that forced Montana to miss almost two full seasons, only returning in the final game of the 1992 season.

By Super Bowl 29 this was very much Young's team with Montana traded to the Kansas City Chiefs years earlier in the 1993 offseason. Young would also go on to be inducted into the Hall of Fame.