The Monday Night Wars are fondly remembered in the eyes of hardcore and veteran wrestling fans for producing some of the greatest television in the industry's history.

However, for some it is not remembered as being so happy, Scott Hall made the switch to WWE's competitor WCW and was then denied his royalty checks as Vince McMahon took his decision to abandon the company as 'personal'. 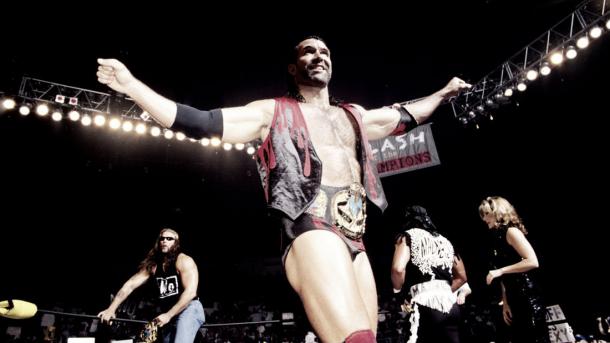 Wrestlers and performers alike are often reliant on several sources of income, with guaranteed contracts very rare within the WWE especially back during the 1990's their reliance on the other areas of income was important to their survival.

Scott Hall just like many others made the switch from WWE to WCW during the height of the Monday Night Wars, Vince McMahon in one night lost two of his top stars to his rival, a decision he took personally.

The now 57-year-old made the switch to the Ted Turner owned promotion in 1996 alongside his friend Kevin Nash, the two would find huge success that would eventually be their downfall.

However when asked about the time he left the company when it was then named WWF he said "I was the guy who left and went to work for the competition and guess what, the competition started winning."

Hall was right, and a lot of that success was due to the establishment of the NWO consisting of Nash, himself and The Immortal Hulk Hogan as WCW's Monday Nitro defeated Monday Night Raw in the ratings for 84 weeks in a row.

He continued "I got blamed for taking Kev (Kevin Nash) with me. I did not get a royalty check for 15-years, Kevin still got his, Vince took it personally when I left, to the point where I did not get royalties."

The Monday Night Wars where full of hatred towards the two wrestling promotions and Vince felt their uprising and attempt to put his company out of business was personal and the poaching of his top-stars was something he thought was personal also.

However, Hall seemed to be in high spirits as he is now receiving royalty rewards once again after being denied them for 15-years he said "I am so happy to be back on the royalty gravy train."

Hall comments on Vader versus Will Ospreay

The Twitter war turned into real life between the Veteran Big Van Vader and Will Ospreay provoked mix reactions with fans feeling the 23-year-old Brit disrespected the big man, Hall however saw it differently.

On social media also, the former NWO member waded in on the impending battle calling Vader a "bitter old timer" and claimed he had "worked himself into a pay day."

He also suggested he should imitate the 61-year-old by engaging into a feud with The Young Bucks.

He said: @itsvadertime Maybe me and Kev will appear on the same card? Gonna have a Twitter feud - Young Bucks.#OldTimersRULE

Vader was criticized for his comments towards Ospreay following his match with Ricochet at the Best of the Super Juniors tournament, you can see the full breakdown of the war.