The Cleveland Cavaliers topped the Brooklyn Nets at home in their final meeting of the season Thursday evening winning 107 to 87, just one week after having lost to the Nets on their home court. Cleveland has struggled in their matchups against Brooklyn this season, but the team has managed to win the season series three games to one.

The Cavaliers took a commanding lead early and held it for the remainder of the game, giving many of their starters a crucial rest on the first night of a back-to-back.

The Nets jumped on an early lead to begin the game, making scoring difficult for the Cavaliers in the opening minutes of the first quarter. Cleveland, however, found a flow and did not look back. Hot shooting by Kevin Love, helped the struggling Cavaliers get back on track and jump to a 29 to 27 lead to end the first. LeBron James hit a milestone in the first quarter, surpassing the great Dominique Wilkins for twelfth on the NBA’s all-time scoring list. Wilkins is the most recent of many greats that James has passed this season, including Tim Duncan, John Havlicek, and Kevin Garnett.

Cleveland extended their lead in the second quarter, aided by the three point shooting of Love, who led the Cavaliers with 16 points in the first half. James continued his efficient scoring effort, adding 14 first half points to help Cleveland build its dominant lead. The Nets were unable to halt Cleveland’s scoring onslaught, as the Cavaliers ended the half on a 27 to six run, leading 63 to 39. The Cavaliers did not head into the locker room at half time feeling like absolute winners as they needed to maintain their intense level of play into the second half, according to JR Smith, who claimed the team learned after giving up a 20-point lead to the Houston Rockets earlier this week. 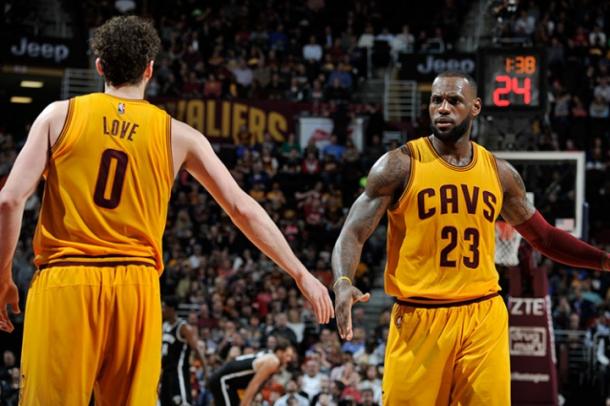 Strong Second Half and Key Players

The Cavaliers were adamant in maintaining their double-digit lead for the remainder of the game, as the team furthered the lead to 30 points in the second half, allowing little advancement by Brooklyn. James led the team with 24 points, on eight for 11 shooting, and 11 assists in 30 minutes of play.  Love also knotted a double-double with 19 points and 10 rebounds in less than 25 minutes of play.  Channing Frye added crucial play time off the bench, scoring 13 points, including three 3-pointers, for Cleveland. Frye, and other key players who provided a lift off the bench, allowed Cleveland to maintain their lead down the stretch, and ultimately beat out the Nets.

Brooklyn, although unable to keep up with the Cavaliers, did have a balanced scoring effort as five players scored 10 points or more. Thaddeus Young led the team with 18 points.  Other contributions came from Bojan Bogdanovic with 14 points and Shane Larkin with 13 points. Donald Sloan and Thomas Robinson added 11 and 10 points respectively off the bench.  Brooklyn shot under 20 percent from 3-point range, being zero for 11 in the first half, and less than 40 percent from the field. Their shooting struggles ultimately hindered their ability to mount any sort of comeback against the red-hot Cavaliers.

Cleveland continues to battle for the first seed in the East, currently maintaining a two and a half game lead over the second seeded Toronto Raptors. They will travel to Phillips Arena on Friday to battle the East’s third seeded Atlanta Hawks.

The Nets will travel face off against their neighboring borough, as they will play the New York Knicks in Madison Square Garden on Friday.