Chan Hao-Ching and Chan Yung-Jan have been named VAVEL USA’s Doubles Team of the Month for February.

The sisters were born and now reside in Taipei, Chinese Taipei. The duo is seen on the tennis court with their matching Lacoste tennis outfits and Wilson tennis racquets. Not only do they look as a team, they move as a team. During points, the net player is constantly attempting to create opportunities to put the ball away at the net. Their consistent baseline striking and court-awareness along with aggressive volleys and communication has led this team to seven titles together.

After two months of the 2016 season, the Chan sisters have two titles under their names. They successfully defended their 2015 Pattaya City title by being victorious in Kaohsiung, which replaced Pattaya City on the WTA calendar this year. The Taiwanese team followed up a successful title defense with a win at the Qatar Total Open in Doha last week. Chan Hao-Ching and Chan Yung-Jan rose into the top 10 following the two week run of championships.

But this is not the Taipei natives first run of glory. Last year, the partnership made it into the WTA Finals in Singapore. They made their way through group play with a 2-1 record, and earned a spot to play in the semifinal round. The Chans went up against Sania Mirza and Martina Hingis, who eventually prevailed against the Taiwanese team 6-4, 6-2. A solid year in 2015 gave the Chan sisters confidence for the new season, hoping to make their way to the top of the doubles ranks this year.

Both players have represented their country in Fed Cup. The current world number two doubles team clinched three decisive doubles rubbers this year in the Asia/Oceania Group I. Chinese Taipei was promoted to the World Group II Play-offs. They will go head to head with Poland in an away tie for a spot in World Group II 2017.

Despite holding a 1-5 record to world number ones Sania Mirza and Martina Hingis, the Chan sisters are at their prime in their doubles careers. A recent surprise loss for the dream team in Mirza and Hingis ended their streak of wins together. It is possible that a potential new dominant team could be in the making. VAVEL USA’s team of the month has won eight matches in a row and with the momentum always shifting on the WTA, a possible new dream team could be emerging.

The in-form duo followed their Taiwan Open championship win by donating all of their prize money. They donated their winnings, $17,724, to the people affected by the earthquake in Taiwan the week before their triumph. The deadly earthquake reached a 6.4 magnitude. A total of 116 people were killed, 286 rescued, and 96 were hospitalized, according to CNN. The sisters' act of compassion towards charity and brilliant tennis is why they are VAVEL USA’s Team of the Month for February. 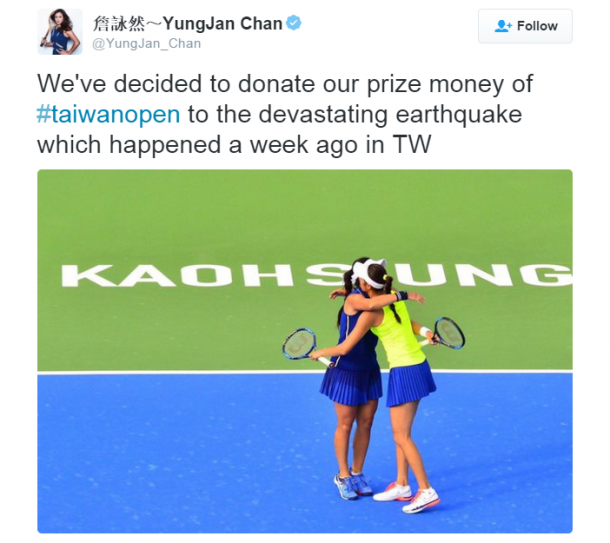 ATP Rotterdam first round preview: Stan Wawrinka vs Karen Khachanov a day ago

ATP Rotterdam: Kei Nishikori "played solid in the important moments" against Felix Auger-Aliassime a day ago