World number one Andy Murray has announced that his charity exhibition event, Andy Murray Live, will return to Scotland for the second year. This year, Murray will be joined by eighteen-time grand slam champion Roger Federer for a blockbuster singles matchup. Tim Henman and Mansour Bahrami will team up to take on Andy and older brother Jamie Murray in the evening's doubles match. The event will take place the week before the ATP World Tour Finals, on the 7th of November at the SSE Hydro Arena in Glasgow.

The event's inaugural edition took place last year and raised an incredible £305,000 for UNICEF and Glasgow-based charity Young People's Futures. Scotland's pride in the Murray brothers was never more clear than when the first ever tennis event at the SSE Hydro sold out over ten thousand seats in just two days. Last year, Grigor Dimitrov replaced an injured Gael Monfils at the last minute and brought plenty of laughs from the Glasgow crowd as he took to the court in a traditional Scottish kilt. Celebrity special guests and audience participation made for a great night of entertainment in the packed arena. 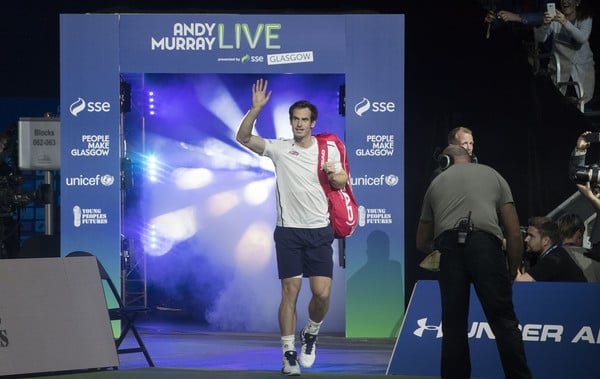 Champions playing for a cause

Federer's first appearance in Scotland will no doubt see a raise the demand for tickets, as already the event looks close to selling out. The Australian Open champion's appearance at Andy Murray Live will be the second of the year in which he and Murray will face off in a charity match, as the world number one is also playing the Swiss star's exhibition, The Match for Africa 3, which takes place in April in aid of The Roger Federer Foundation. Andy Murray Live will once again be raising money for UNICEF, with a second charity to be announced at a later date.