Chelsea's top four hopes were dealt a massive blow on Saturday night as they were defeated 1-0 at home to Bournemouth.

The reigning Premier League champions are now languishing in 14th place, 18 points off the pace.

In a game that Chelsea dominated during spells, they failed to make this superiority count. The Blues had chances in both halves which they failed to take.

Although possession was massively in Chelsea's favour, Bournemouth more than matched the champions for shots on goal - which ultimately saw them snatch a late goal.

It was much publicised last week about the spat between Diego Costa and manager Jose Mourinho. Things though seemed to be resolved against Bournemouth as Costa made a substitutes appearance at half time.

Oscar was replaced by the striker at half time, with Mourinho hoping that Costa could break the deadlock and try to get amongst the Bournemouth backline.

The Blues created opportunities before and after Costa's introduction, but Artur Boruc - the Bournemouth goalkeeper - was equal to whatever Chelsea threw at him.

If the Spanish international couldn't make an impact against the team that have the joint-worst defensive record in the Premier League, then Chelsea's attacking woes are only just beginning. 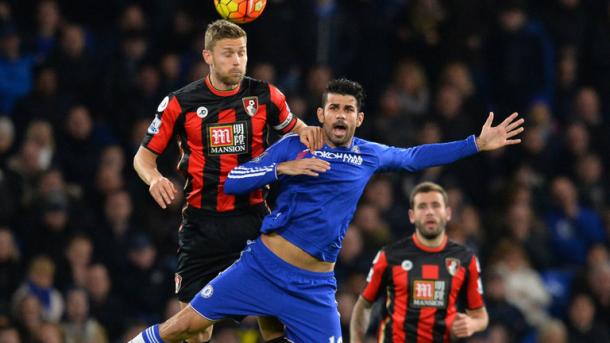 When the match ended boo's were heard around Stamford Bridge, with Mourinho the man who is feeling the brunt of that pressure. You can never rule out the Portuguese manager though, with his CV as good as any other manager in the game. However, we may have seen the Chelsea boss admit defeat after the game.

The Blues boss has acknowledged in previous weeks that they may have to settle for a top for spot this season and fail to defend their title. But the Bournemouth game saw him admit that top six is now the new aim.

Mourinho told Sky Sports that 'now we maybe have to think about top six' and confessed that he was 'concerned' for his Chelsea side.

Tuchel has brought stability to the Bridge, but the real test starts now&nbsp; 8 days ago

Chelsea v Newcastle United Preview: How to watch, kick-off time, team news, predicted lineups and ones to watch 10 days ago

The Warm Down: Unconvincing Chelsea edge past Barnsley to reach the FA Cup quarter-finals 13 days ago

The Warm Down : Tuchel showcases his expertise as new formation squeezes Burnley into submission 25 days ago

What to expect from Tuchel's Chelsea 25 days ago
//