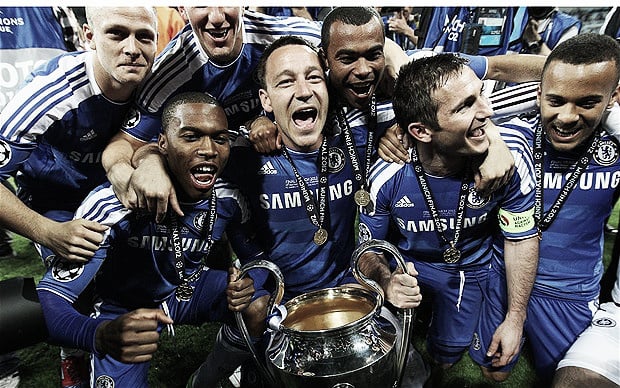 Chelsea FC were formed in 1905 and play at Stamford Bridge in South West London. The club are currently managed by the club’s all-time top goal scorer, Frank Lampard. The Blues are one of the most successful English teams over the last two decades winning the Premier League, FA Cupand EFL Cup on numerous occasions. They have won the UEFA Champions League in 2012 and UEFA Europa League in 2013.

The club was created in 1905 by an English businessman, called Gus Mears, who owned the Stamford Bridge Athletics Stadium with the plan of transforming the it into a football ground.

Chelsea was a club created to fill a vastly popular stadium that was well known across London. Stamford Bridge was brilliantly sited: on a main bus route into the West End and City from west, with an overground and Tube station close by. It attracted spectators from all over London and beyond, as well as the Fulham and Chelsea area.

The board were very ambitious and spent huge amounts of money on attractive players who would draw an audience. Chelsea became home to the first non-British player in the Football League, the Danish Nils Middelboe, who arrived at the club in 1913.

The Bridge had the highest average home attendance in the country on nine occasions. Chelsea became an entertainment venture that happened to be in football. The crowd comprised a mixture of artists, working people, and celebrities. Until the 1950s, Stamford Bridge was renowned for its fairness and welcoming nature.

Stamford Bridge admission fees were relatively low to attract bigger crowds. The revenue was immensely important as it allowed the stadium to be developed as well as paying for ‘box office’ players. It was run as a business, albeit a branch of the leisure industry, and in the 1910s Chelsea broke records for football clubs’ profits.

The initial five years of the club’s creation were not as successful as planned as Chelsea bounced between Division One and Division Two. The Blues reached their first FA Cup final in their second decade of existence.

Chelsea secured their first Division One league title in 1955 which sent shock waves around the country due to mediocre prior seasons. Mediocrity would soon return, and the Blues would have to wait 50 years before their next top division title.

The football hooliganism era was largely prominent between the 1960s and 1980s with the Blues having their own ‘ultras’ group the Headhunters.

The Headhunters were a small group whose exploits – included cutting people up and leaving a card saying ‘You’ve been Headhunted’ – were rare and largely mythologised. The vast majority of Chelsea fans involved in organised violence were nothing to do with the Headhunters and their Nazi chic.

Older supporters became less happy to go to games, crowds dipped, but the young fans kept attending. ‘Ends’ became a classic subculture term, with codes to behaviour and clothing, group chanting, and pressure to 'stand your ground’ in confrontations. It took on a bad-boy glamour, fuelled by singing contests between clubs on TV, and things like the News of the World printing league tables of arrests.

At Chelsea the Shed was a mixture of people who liked the atmosphere and the singing, and others who liked a scrap. The North Stand, next to the away supporters, was more for those like a ruck.

The Far Right saw football terraces as an easy recruiting zone. An element of Chelsea support was infiltrated by these groups, including violent Nazi ones such as Combat 18, and Blues supporters with such views formed the largely mythologised Chelsea Headhunters.

In that period, it was not always a good thing to admit you supported Chelsea in polite society. ‘Hooligan' and ‘Chelsea' were almost synonymous at one stage. If it was not the hooliganism people objected to it was the racism that had gripped pockets of the fan base.

For a period, there were many financial issues at Chelsea which threatened the redevelopment of Stamford Bridge. This, alongside the previously mentioned hooliganism issues in the stands, put the club is a vulnerable position.

Chelsea was eventually sold to Ken Bates for an infamous £1 sum in 1982. Bates stabilised the club ultimately saving Chelsea from bankruptcy.

Old but gold and back in the spotlight

It was in 1996 when the club appointed Ruud Gullit as a player-manager. An appointment that put the Blues back on the world stage and in the spotlight. Gianluca Vialli and Gianfranco Zola led the line for the Blues at the time. Chelsea became one of the most exciting teams in the country.

The start of the Roman Abramovich era

In 2003, Chelsea's prospects changed forever when the club was sold to Russian billionaire, Roman Abramovich for approximately £18million. The new owner immediately led Chelsea to an era of financial stability, paying off the majority of the club's debts and spending a then-unprecedented amount of money on star signings.

Jose Mourinho was brought in and appointed new Chelsea manager in 2004 off the back of a magnificent tenure at Porto.

Winning the Champions League with the Portuguese side put Mourinho on the map, his presence was becoming known around the footballing world and Chelsea awaited a magical era.

Mourinho lasted 184 games in his first spell at Stamford Bridge. The three-year span included two Premier League titles, which were the first in the club's history. His swagger and confidence bought the hearts of English press before labelling himself ‘the special one’.

Over the next six years, Chelsea would win another Premier League title, the FA Cup, the Community Shield, Champions League and Europa League.

Chelsea won their first ever Champions League title in 2012, under Roberto Di Matteo. The Blues were placed in Group E with Bayer Leverkusen, Valencia (who they face on Tuesday in their first Group H game) and Genk. On paper that looked like an easy group for Chelsea, but at this time the Blues were struggling under Andre Villas-Boas in the Premier League, and furthermore it proved not to be easy. The campaign proved to be a magical affair for the Blues as they continued to flirt with the prospect of European glory before defeating Bayern Munich on penalties at the Allianz Arena in the final.

The odds were stacked against the Blues, as they had their captain John Terry ruled out of the game for picking up a red card against Barcelona in the semi-final. The first half was mostly dominated by the German side, but Chelsea had their half chances as well. The Blues defended so well as a unit without their captain in that first half. But as the second half progressed, and Bayern's attacks continued, you knew something had to give.

In extra time the Ivorian became the villain, as he conceded a penalty. The penalty however was saved by Petr Cech who bailed Didier Drogba out. The final went to penalties, and the Blues started the shootout in the worst possible way with Juan Mata's penalty being saved by Manuel Neuer.

Luckily for Chelsea, Cech managed to save Ivica Olic's penalty, before Bastian Schweinsteiger hit the post. This left Drogba to take the fifth and final penalty for Chelsea and scored.

Having just won the Champions League and Europa League, Mourinho returned to South West London in search of more success with Chelsea.

The Portuguese manager secured his third Premier League title and the fifth for the club with three games to spare. The eventual points total was the third highest in top-flight history and a mere three league games were lost in 2014/15, all away from home.

Cesc Fabregas was peerless in providing assists, Diego Costa netted 21 goals in all competitions; Eden Hazard scored 19 and collected an abundance of individual awards. The season was made all the better by winning the Capital One Cup final against Tottenham, revenge for defeats against our London rivals in Wembley finals in 1967 and 2008.

However, the defence of the league title in 2015/16 surprised everyone and with the team only one point above the relegation places just before Christmas, Mourinho left the club for a second time. Guss Huddink took helm of the ship before Antonio Conte was appointed ahead of the 2016/17 season.

Conte left his stamp on the club by implementing his famous 3-4-3 formation as well as winning the Premier League and FA Cup. He was eventually sacked after two very successful seasons and replaced by Italian counterpart Maurizio Sarri.

Sarri, lasted just one season at the helm of Chelsea winning the Europa League beating Arsenal in the final. The following summer, Hazard and Sarri left for Real Madrid and Juventus, respectively.

Frank Lampard returned to Chelsea as the club’s new Head Coach on a three-year deal in replacement of Sarri.

Lampard enjoyed a colourful 13 years at Chelsea as a player winning countless honours. In his time with the Blues, the 41-year-old appeared in 648 games and scored a blistering 211 goals to lead the charts as Chelsea’s all-time top goal scorer.

The 2011/12 Champions League winner joined Chelsea in June 2001 for £11 million from West Ham. Lampard featured 187 times for the Hammers scoring 38 goals and spent a period out on loan to Swansea - but his goal scoring prowess didn’t stop there, it went from strength to strength.

He made his debut for Chelsea on 19th August 2001 against Newcastle United at Stamford Bridge which resulted in a 1-1 draw.

His first goal for the Blues came in a 3-0 win over Levski Sofia at home in a UEFA Cup match on 20th September 2001. He later scored his first goal for Chelsea in the Premier League that saw Bolton Wanderers defeated 5-1.

Lampard’s opening five seasons with the club saw him pick up four pieces of silverware and score his 50th league goal for Chelsea. Two Premier League titles, a League Cup and the FA Community Shield all to his name but the best was yet to come.

The goal-scoring midfielder registered his 200th appearance for the club in 2005. A 2-1 away defeat to Barcelona in the Champions League.

Chelsea’s iconic number eight had earnt the attention from the World’s best. A union, a collective that Lampard had soon become a part of.

Having enjoyed a successful first five seasons with the Blues, Lampard had his eyes on bigger fish. The renowned goal scoring midfielder went on to win a further nine trophies over eight seasons.

The flood gates had opened. The trophies and goals kept flooding in. He went on to win the Champions League in 2012, a third Premier League title in 2010, the Europa League in 2013, four FA Cups, a second League Cup and a second Community Shield. A colossal 13 pieces of silverware over a 13-season reign.

The Blues’ Head Coach established himself as a goalscoring midfielder that sent shock waves around the globe. He scored 211 goals for Chelsea in all competitions, 49 of which were penalties and Lampard earned himself an 84% conversion rate.He also scored eight of ten penalties in penalty shootouts. One of which was in Munich against Bayern Munich in the 2012 Champions League final.

Lampard currently works alongside Morris and Joe Edwards on the sidelines. Former Blue Newton was a member of the manager's coaching staff before departing mid-season for a manager's role overseas.