A lethargic performance from Manchester City ensured that they'll sit six points off the top of the Premier League table come Christmas Day, as they were beaten 2-1 by Arsenal at the Emirates Stadium.

Theo Walcott and Olivier Giroud bagged a goal each towards the end of a tight first half, allowing the Gunners to carve City open on the counter-attack during the second, only for some wonderful goalkeeping from Joe Hart to keep the score at 2-0.

Hart's performance had kept City in the game, and it looked like they might snatch a point when Yaya Toure clawed one back in the 82nd minute, but Arsene Wenger's men clung on to take a much deserved victory.

Each side cancelled each other out in a rather tentative opening to the game, with Arsenal's new found resilience in matches of large-stakes making them a tougher team to break down, whilst taking a little away from their normally dynamic attacking play.

Theo Walcott and David Silva both sent shots off target in the early proceedings, with little quality on show to suggest that these were in fact two teams sitting second and third in England's top divison.

Kevin de Bruyne gave Petr Cech his first real test of the night shortly after 20 minutes, cutting inside from the right wing and sending a left-footed shot towards Cech's near post, an effort which the experienced 'keeper pushed wide without much trouble. The Belgian failed to follow that invention up with a good delivery from the resulting corner, striking the corner flag with his boot at the first attempt to play a quick pass.

De Bruyne made to pay for missed opportunity

His night didn't get any better soon after, as de Bruyne had City's best chance of the half presented to him, but failed to open the scoring from it. With City breaking down the right hand side, he had all the time in the world with him and David Silva in a two on one situation against Per Mertesacker, but the midfield appeared to be caught in two minds as whether to pass or shoot, and ended up dragging an effort narrowly wide of the goal.

He was made to regret it less than a minute later, as a superb strike from Walcott put Arsenal ahead. Taking the ball just to the left, on the edge of the penalty area, he swung a powerful effort across goal that flew into the corner of Joe Hart's net. 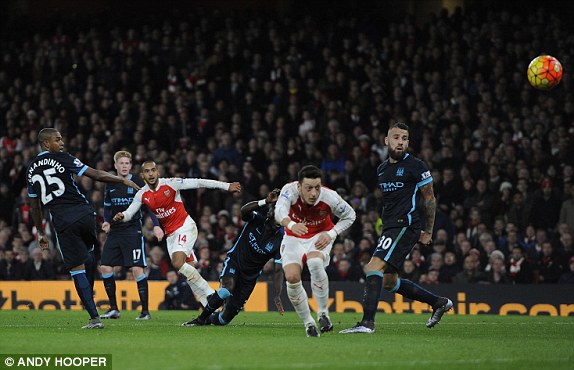 Giroud adds a second on the stroke of half time

The hosts weren't done either, and made it 2-0 right on the stroke of half time. With just five second do go in the one minute of additional time, Giroud struck to double the lead.

Slack defending from Eliaquim Mangala saw him give the ball away cheaply, allowing Mesut Ozil to slide the Frenchman in behind, with Giroud making no mistake as he powered the ball between Hart's legs, Ozil picking up his second assist of the game in the process.

Surprisingly enough, it was only Arsenal's second shot of the half from which they scored their second goal, with ruthless clinicality playing a huge role in City's downfall. 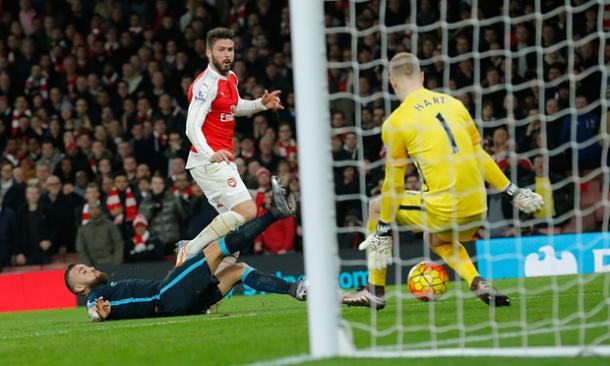 Arsenal look to carve Citizens open on the counter

Manuel Pellegrini didn't hesistate to make a change at the interval, and it was an attacking one as Raheem Sterling replaced Fabian Delph.

It didn't make much of a difference to begin with, as Arsenal had a fantastic chance to make it three soon after play resumed, with Joel Campbell missing a golden opportunity. Nacho Monreal was released down the left wing and swept a good ball into the six-yard box, but the Costa-Rican could only glance his effort over the bar after beating his marker to the ball.

Sergio Aguero, returning from injury, had been on the periphery for the opening hour, and couldn't take his first chance of the night, with the Argentine heading straight into Cech's hands from Aleksandar Kolarov's free-kick.

Hart heroics keep it at two

The Gunners raced straight up the other end and presented Campbell with another chance to score, however Hart was alert to the danger, saving with his feet from the winger's toe-poke.

Arsenal were carving City open on the counter-attack, and had another brilliant opportunity to put the game to bed just short of the 60 miute mark. Fantastic work from Hector Bellerin down the right hand side saw the Spaniard pinch the ball from Fernandinho's grasp, setting up the break.

Guiding the ball to Ozil, Arsene Wenger's side were breaking forward in numbers, and the German found Campbell, who found Aaron Ramsey, only for Hart to deny the Welshman with a save from point-blank range.

There were a couple of penalty shouts for City as the game entered the latter stages, namely Sterling and Toure going down in the box after intricate dribbling, but neither were of substance as referee Andre Marriner turned both down.

Substitute Jesus Navas had one of the best chance he'll get to break his barren goalscoring run with 10 minutes left on the clock, timing his run brilliantly to break in behind the Arsenal defence down the right channel. However, Navas tried to square the ball to fellow sub Wilfried Bony instead of striking at goal, and saw his pass intercepted, to the frustration of his teammates.

Navas certainly felt much better a few minutes later though, as a wonderful goal from Yaya Toure brought the score back to 2-1. Played the ball whilst standing on the edge of the area by Bacary Sagna, the Ivorian curled a beautifully weighted first time shot into the top left hand corner with his weak foot. 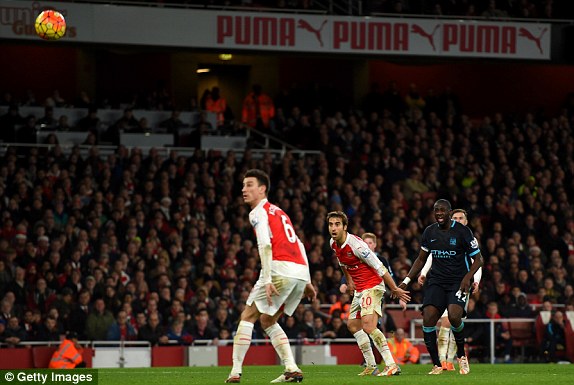 Such was the sheer quality of Toure's goal, it was no surprise that his teammates were shocked by it, to the extent that they almost gifted Arsenal a third straight from kick-off. Another ghosting run from Aaron Ramsey went untracked, and the central midfielder beat Hart with a dinked effort, only for the ball to drop wide.

Pellegrini's men didn't let that lapse in concentration deter them, and continued to pour forward, with Bony striking wide and heading over in the following few minutes. Toure even had another chance himself after being slotted in by de Bruyne, but could only poke wide from a difficult angle.

No fairytale equaliser for City

Despite looking for those precious few minutes like they were going to rally back and snatch an equaliser, City hadn't put in a performance deserving of doing so, and were unable to unlock the Arsenal defence one more time in the dying minutes.

Defeat leaves the Sky Blues third in the table, four points off Arsenal, and six points behind leaders Leicester City, ahead of a Boxing Day fixture against Sunderland.

The Warm Down: Ten-man Leeds stun City at home 4 days ago

Manchester City vs Leeds United Preview: How to watch, kick-off time, team news, predicted lineups and ones to watch 6 days ago

The Warm Down: Phil Foden makes dent in Dortmund's Yellow Wall 8 days ago

The Warm Down: Man City outfox Leicester City 11 days ago
//