Different tactics, but the same result

In the first home game at the bet365 stadium, Mark Hughes opted for a change of formation to 4-3-3, instead utilising his more favoured 3-5-2 that has been the norm for the majority of his reign as Stoke City manager. The opposition, Manchester City went with 4-1-4-1, enabling them to have width and an abundance of creativity in attack as David Silva, Jesus Navas, Raheem Sterling and Kevin De Bruyne were able to interchange and attack down the wings.

Early on in particular, the away side exploited this width. All too often Stoke were caught too narrow in the middle of the pitch and Bojan in particular was guilty of being drawn into the centre which meant that down the left hand side, Raheem Sterling was able to attack Phil Bardsley and use his pace to devastating effect. 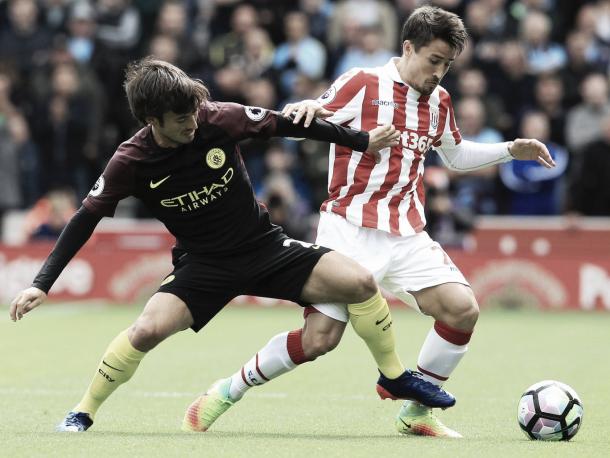 The lack of width for the home side should have meant that Mama Biram Diouf  had support either side of him up front, but yet again the Senegal striker was isolated and caught in possession whenever he looked to hold up the ball. The one chance that did fall his way was headed off target when a Premier League striker should have scored. Even a change of formation could not help the Potters to find a sustained attacking threat.

Pep Guardiola fails to use his Hart

In the build up to the match there was much discussion as to who would be in goal for Manchester City. Most notably, Joe Hart was again left on the bench, and during the past week it has emerged that Pep Guardiola has told Hart that he is free to leave should he wish to gain consistent first team football.

It has been well documented that this is because Guardiola expects his ‘keepers to be competent with the ball at their feet. Willy Caballero therefore got the nod and performed well with his gloves, saving smartly from a well struck volley from Phil Bardsley. However, his distribution left a lot to be desired, and on more than one occasion he struck the ball out of play on the full. It may appear that despite what Guardiola has said, his vendetta against Hart is more personal than he is willing to let on, with Barcelona's Claudio Bravo expected to join City in the coming weeks, ending any hopes of a Hart recall.

The referees in recent weeks have been making all of the headlines as multiple new initiatives are being enforced this season. Last week saw the introduction of dissent being tackled hard by referees, a stance which has taken too long to come into action.

This week, the contentious issue was grappling in the area. The first big decision saw Ryan Shawcross penalised for tugging on Nicolas Otamendi’s shirt. At first instance it looked soft, but bearing in mind that each club has been visited and told that referees are clamping down on this, it seems as though Shawcross was playing with fire when grappling with Otamendi.

It wasn’t to be the last contentious decision by Mike Dean and early in the second half he was once again pointing to the spot for an incident in the penalty area. Sterling had been the man of the match before he decided to impede Shawcross’ path to goal at a corner. Contact was minimal and these soft decisions, which arguably both of them were, cannot be good for a game which ultimately is a contact sport.

If the referees are consistent in their implementation then it is likely that multiple penalties will be awarded per match which is in nobody’s best interest. Unlike the issue of dissent which was getting out of hand, I for one believe that the game is better for a little contact at set pieces, and the rough and tumble of the Premier League adds to the entertainment of the league.

Both teams will probably feel that they were on the receiving end of a bad decision and they wouldn’t have been penalised for either last year. It remains to be seen whether this is a short term purge by a referee who wants to have the headlines, or a long term crack down across the league.

However, there can be no disputes as to whether Dean should have given Stoke a penalty in the first half as Joe Allen was brought down with a clumsy tackle by Aleksander Kolorov. Having awarded Manchester City a penalty moments before, and then to not award this spot kick was a basic error, and referees should make sure that they award the common place decisions before they complicate their own jobs awarding spot kicks for players competing at corners.

Alternatively, these instances may make the Football Association take note and realise that video replays, or team challenges could become necessary to avoid incorrect decisions being made on a weekly basis.

It has been well documented that Stoke’s defence is in need of serious reinforcement and again they were found wanting. Kevin De Bruyne’s free kick was delivered with pin point accuracy, but a player who is of small stature, such as Aguero, should not be scoring with a header against the likes of Glenn Whelan and Philip Wollscheid. It appeared as though Whelan was out of position which allowed for Aguero to ghost in and glance a header past Shay Given. The Potters must rectify these errors if they are to improve on last season.

The third and fourth goals that Manchester City scored came late on as the home side pressed for an equaliser, but the frequency with which the Stoke defence concede four goals in a match must be looked at.

Rumours suggest that Stoke have been interested in Phil Jones and perhaps a centre back with more acceleration than Wollscheid could help the Potters when coming up against pacey forwards. The fourth goal in particular, where a dummy by Kelechi Iheanacho was enough to wipe out the entire Potters back line, is avoidable and basic errors like this shouldn’t be occurring at the elite level that these players are at.

Mark Hughes’ men haven’t kept a clean sheet in 11 games and it seems a trend that is set to continue if changes aren’t made in training or to personnel.

Joe Allen provides some light at the end of the tunnel

It wasn’t all doom and gloom for the Potters as Joe Allen made his first start and appearance at the bet365 Stadium; the midfielder was easily Stoke’s man of the match. In possession he drove the home side forward, carrying the ball and distributing with ease; he is certainly extremely comfortable in possession and did his best to link up play.

Without possession he was equally industrious as he made good interceptions and contributed in attack by making runs to create space for others. The Welshman also shot over the bar and had one ball intercepted which would have been dangerous as it was heading across the six yard box. Allen was also the victim of a poor refereeing decision not to award him a penalty having been clearly fouled in the first half. If Allen is able to add to his endeavour with consistent goals then the Welsh Xavi, as he was famously dubbed by Brendan Rodgers, could add further to ‘Stokealona’.

Stoke will be hoping that they can get their first win of the season against Ronald Koeman’s Everton next week, but a trip to Goodison Park against an Everton side who have been solid, if unspectacular, so far this season is no easy task.

It is also worth remembering that we are still early on in the season and the pre-season review of the Potters noted how Stoke often make slow starts. However, with the international break looming, Mark Hughes will want to try and start registering points as soon as possible.

For Guardiola this was a result that will satisfy him greatly as his side were slick in possession and should mean that they go into their next league game against West Ham full of confidence. It’s been a question on everybody’s lips since before he arrived, but today Pep Guardiola showed that he could do it on a cold, wet, windy afternoon at Stoke.