The first piece of silverware in the English football season has been decided, as Arsenal lifted the FA Community Shield at Wembley Stadium with a 4-1 penalty shootout win over Chelsea after a 1-1 draw in normal time. 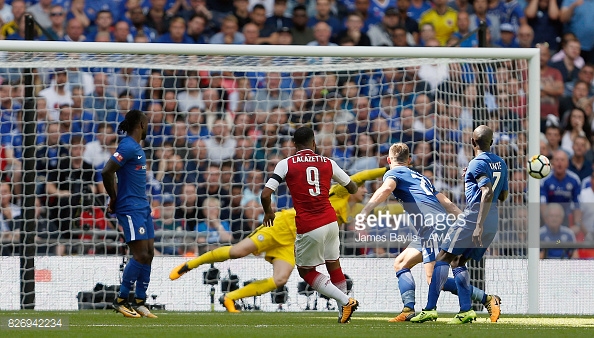 The annual Community Shield once again brought together the winners of the FA Cup and the Premier League and it proved to be a rematch of the clash that got Arsenal to the game in the first place. With less than a week until the start of the Premier League season, both sides were looking for a confidence boost and it was
Arsène Wenger's side that hit the ground running.

The first chance arrived in the seventh minute as Alex Iwobi did brilliantly to get beyond David Luiz and cut it back from the byline. Lacazette was waiting as he looked for his first competitive Gunners goal but it struck the Frenchman's arm and trickled wide. It was then the turn of Welbeck a minute later as he was on the end of Xhaka's deep cross into the area, but the striker's header was straight into the arms of Courtois.

Lacazette was looking to impress the Arsenal fans under the famous arch and came within inches of giving them the lead in the 22nd minute. The striker started and ended the flowing attack as he curled the effort from 18 yards and it cannoned off the post. 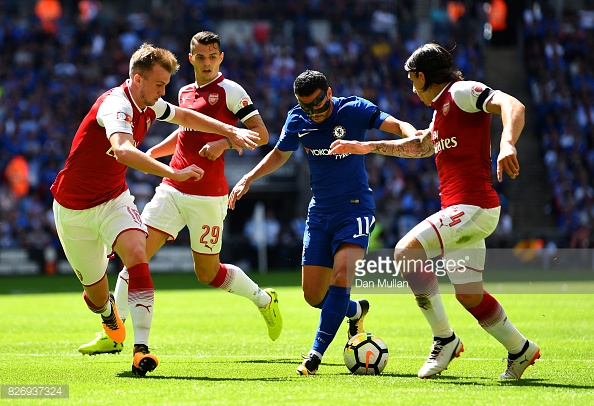 The Blues were looking to start the defence of their Premier League title with some style, and Antonio Conte's side started to put the pressure on Arsenal as the half came to an end

Their first real chance came in the 32nd minute as Moses managed to bundle his way through the Arsenal defence and to the byline. The winger managed to get the shot away and Petr Čech did well to block with his leg at the near post.

The final opportunity of the half arrived two minutes later as Willian produced an excellent crossfield ball for Pedro. The Spaniard let it rip but Čech produced a decent high save to deny him. 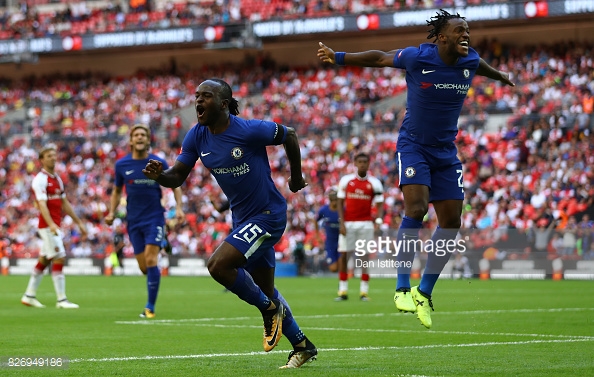 Conte's side continued their assault on Arsenal going into the second period, and they managed to break through just a minute after the restart. A corner wasn't fully cleared as Gary Cahill head it back into the danger zone and to the feet of Moses. The Nigerian took a touch before firing past Cech from close-range to send the blue half of the national stadium into pandemonium.

Been called into action

Arsenal didn't seem that fazed by falling behind as they continued to push forward. They had two great opportunities as the half went on only to be denied by the heroics of Courtois.

The chance in the 59th minute did come out of the blue as Elneny looked to cross it in from the right. The curling effort looked to be creeping under the crossbar but Courtois managed to put it behind.

Desperation was starting to creep in as the minutes trickled down but Courtois was at it again in the 76th minute. Xhaka decided to let rip from 25 yards out and the ball looked to be nestling into the top corner but Courtois produced an excellent fingertip save to keep Chelsea ahead. 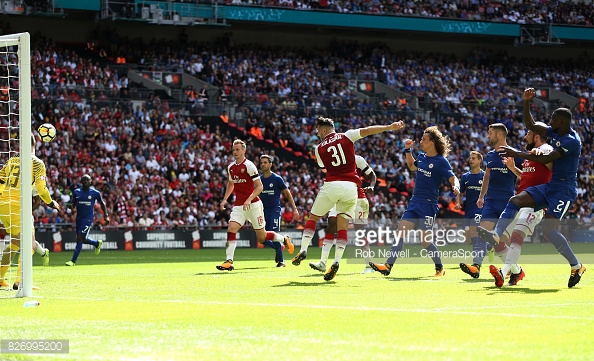 Sending off makes a difference

It did look like Chelsea had the result sewn up as the clash entered its final ten minutes, but the tie was turned on its head as Conte's men were reduced to ten. The decision appeared to be correct as Pedro dangerously went into the back of Elneny, and referee Robert Madley had no hesitation in giving the winger his marching orders.

That sending off did prove to be the difference as Arsenal managed to equalise two minutes after gaining their man advantage. It was simple enough from The Gunners as Xhaka's free-kick found Kolašinac at the far post who headed it back across goal and Courtois and into the far corner.

Chelsea fans were left with their heads in their hands as it looked like they might have snatched the win in injury time. Former Gunner Cesc Fàbregas floated a free-kick into the area and found the head of Morata but he managed to put it wide of the mark. 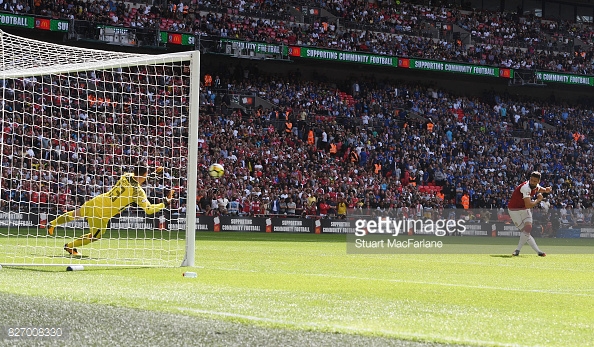 Proving clinical when it's important

The match went into a shootout and saw the introduction of the new ABBA penalty system. Both sides looked up for the job as Cahill, Walcott and Monreal coolly slotted home the first three penalties. Oddly, Courtois was the next up for Chelsea and that choice certainly backfired as the Belgian fired over the crossbar. Morata was the next up and the club-record signing got his Blues career off to a poor start as he put it just wide of the right-hand post.

Oxlade-Chamberlain put Arsenal on match-point as he coolly slotted past Courtois. Giroud had the chance to secure the victory and the Frenchman did it in some style as he fired it into the top corner to round off a thrilling afternoon in the English capital.

'It will be a really tough match': Mikel Arteta wary of Arsenal's Bournemouth trip a month ago